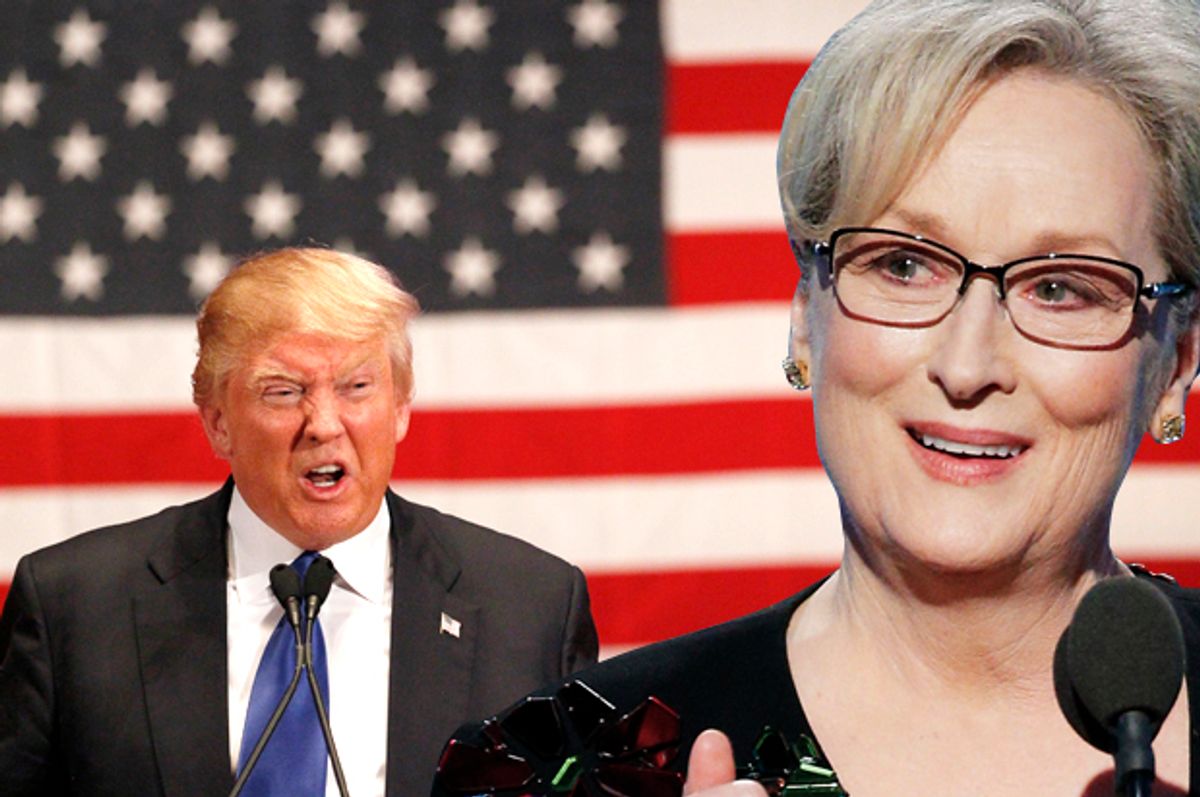 During Sunday night's Golden Globes, Meryl Streep took the opportunity to hit Donald Trump over the president-elect's lack of empathy.

After criticizing Trump's xenophobia by commenting that "Hollywood is crawling with outsiders and foreigners," Streep attacked Trump's infamously demeaning impersonation of a disabled reporter from the 2016 election. Although she closed with a tribute to the importance of a free press, it is this section of the speech which seemed to most upset Trump.

"There was one performance this year that stunned me," Streep said. "It sank its hooks in my heart. Not because it was good. There was nothing good about it. But it was effective and it did its job. It made its intended audience laugh and show their teeth. It was that moment when the person asking to sit in the most respected seat in our country imitated a disabled reporter, someone he outranked in privilege, power, and the capacity to fight back. It kind of broke my heart when I saw it. I still can't get it out of my head because it wasn't in a movie. It was real life.

"And this instinct to humiliate, when it's modeled by someone in the public platform, by someone powerful, it filters down into everybody's life, because it kind of gives permission for other people to do the same thing," Streep concluded. "Disrespect invites disrespect. Violence incites violence. And when the powerful use their position to bully others, we all lose."

Although Trump has tried to revise his ridicule as an attempt to impersonate groveling rather than poke fun at someone's disability, The Washington Post has analyzed that defense and deemed it false with Four Pinocchios.

But Streep's memorable speech invoked Trump, and naturally, he had to respond. On Monday morning, he told the New York Times that he wasn't surprised the "liberal movie people" in attendance on Sunday night would take shots at him. After that, Trump went on a Twitter, and wasn't so gracious toward the three-time Academy Award winner.

Meryl Streep, one of the most over-rated actresses in Hollywood, doesn't know me but attacked last night at the Golden Globes. She is a.....

Hillary flunky who lost big. For the 100th time, I never "mocked" a disabled reporter (would never do that) but simply showed him.......

"groveling" when he totally changed a 16 year old story that he had written in order to make me look bad. Just more very dishonest media! — Donald J. Trump (@realDonaldTrump) January 9, 2017

Others on Twitter let their views be known, from supporters to Trump advisers and alt right YouTubers trying to knock Streep down a peg.

There is nothing politically offensive about demanding a free press in a democracy. @MerylStreep knocked it outta the park. — Patricia Arquette (@PattyArquette) January 9, 2017

So I'm hearing from Donald-lovers that because Meryl Streep is an actress, her statements have no worth. Unlike, say, a reality TV star. — David Baddiel (@Baddiel) January 9, 2017