Fallon flubs, Streep soars: The highs and lows of the Golden Globes

Nearly sunk by an ineffectual host, this year's telecast will be remembered for Meryl Streep's outstanding speech 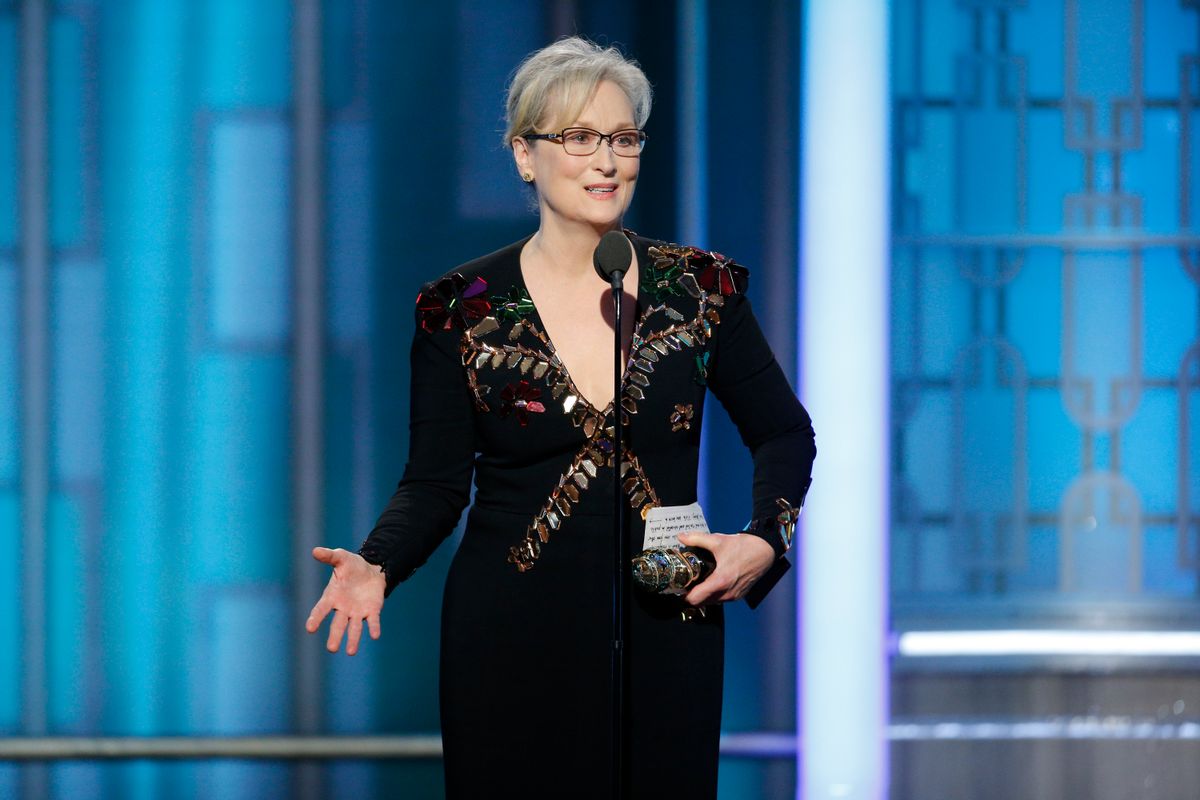 This is said in full acknowledgment of Tina Fey and Amy Poehler’s tag team magnificence in 2013, 2014 and 2015. Nothing compares. And in light of Meryl Streep’s eloquent, fiery criticism of the president-elect delivered during her acceptance of the Cecil B. DeMille Award on Sunday, to have had them as ringmistresses of the 74th Golden Globes show could have made it a night for the ages.

Instead, we got Jimmy Fallon.

Missing Gervais is no snub to Fey and Poehler, understand. Rather, it’s meant to fully convey what a plummeting disappointment “The Tonight Show” host was because I’m referring to the Gervais that hosted the Globes for the fourth time. The one who strutted out midway through 2016’s self-congratulatory booze fest and pleaded to be euthanized. “Kill me,” he said, speaking for most of the audience watching at home.

That was the kind of host we needed in 2017, a sharp and empathetic master of ceremonies unafraid to speak to the grim state of affairs outside of Hollywood’s champagne bubble. Fallon was never going to be that guy, but he didn’t have the good sense to simply get out of the way, either. Miserably, he began dying from the moment he walked onstage.

The obsequious host of the Globes telecast, which aired Sunday on NBC, contended with technical difficulties following a pretaped cold open that came off splendidly. It was an ode to the musical film “La La Land,” featuring cameos by the likes of Nicole Kidman, Sarah Paulson, Evan Rachel Wood, Kit Harington and Rami Malek. Ryan Reynolds draped himself across a piano as Fallon pretended to play. Fallon passed over Tina Fey to do a bromantic dance number across a starlit sky with Justin Timberlake.

Devoting an entire awards show bit to a single film is a little odd, even said movie hadn’t ended up setting a new record with seven Globe wins. But the pleasant bit got the night off to a decent start, and even included a Busby Berkeley-inspired number paying homage to Barb on “Stranger Things.”

The trouble started as the live show kicked off and the teleprompter malfunctioned, forcing Fallon to vamp. Better hosts would have thrilled viewers with their improvisational skills. But, alas, our host had nothing up his sleeve but buttons.

After the problem was fixed, Fallon launched into a weak impersonation of Chris Rock telling an O.J. Simpson joke. This dud was followed by a few flaccid Donald Trump digs. First he attempted a “Game of Thrones” joke. "A lot of people are wondering what would have been like if King Joffrey had lived,” said the man who had playfully rumpled Trump’s dyed mop on "The Tonight Show," as if he were a golden retriever as opposed to a dangerously ignorant xenophobe. "Well, in 12 days we're going to find out."

And then came this Fallon line: "This is the Golden Globes, one of the few places left where America still honors the popular vote.” A knee-slapper inspired by “Florence Foster Jenkins” came next: “Even she turned down performing at Donald Trump’s inauguration," he said.

Fallon then wound up his monologue by joking that the votes had been tabulated by the accounting firm of Ernst and Young and Putin.  It’s funny because — come to think of it, it’s not all that funny.

Maybe now the Hollywood Foreign Press Association knows why Fallon’s selection as host failed to generate much excitement. The recorded opener revealed that Justin Timberlake's imitation of Jimmy Fallon is actually best version of Jimmy Fallon. The live section showed us that Jimmy Fallon imitating Chris Rock should never happen again. By the time Fallon riffed on the chorus of Cypress Hill’s “Insane in the Brain” to annoyingly introduce Eddie Redmayne and Jessica Chastain, he resembled a partygoer desperate to make strangers like him. The guy's comedy is unsalted porridge.

Actually, Hugh Laurie sent off the best political joke of the night, admitting during his acceptance speech for his work in AMC’s limited series “The Night Manager” that he was honored to be at "the last-ever Golden Globes."

“I don’t mean to be gloomy,” he said, “but [the organization] does have the words 'Hollywood' and 'Foreign' and 'Press' in the title.”

Fallon wasn’t the only party guilty of tone-deafness at the Globes. Demonstrating that all black films look alike, Jenna Bush Hager gave us “Hidden Fences” during her Red Carpet coverage, combining the title of two films led by African-American casts, “Hidden Figures” and “Fences.” When Michael Keaton also made the flub during his turn as a presenter, a hashtag was born out of both frustration and boredom. Somewhere along the line the telecast's writers decided it would be hilarious to make Sofia Vergara pretend to be incapable of saying “anal” instead of “annual” in her heavy Spanish accent. Viva diversity.

That’s the Globes for you — always a night of bizarre choices, shocks and contradictions.

It's true, we had to put up with all of that. For our patience we were treated to Viola Davis' elegant introduction of Streep, and the film legend's inspiring, endlessly quotable speech that defended Hollywood as place “crawling with outsiders and foreigners." Streep added, "And if we kick them all out you’ll have nothing to watch but football and mixed martial arts, which are not the arts.”

She later referred to Trump's actions without specifically mentioning his name with this observation: “Disrespect invites disrespect, violence incites violence. And when the powerful use their position to bully others we all lose.” Streep then encouraged Hollywood’s privileged to step up and support the Committee to Protect Journalists.

This was an incredible interlude, no question. And after a few commercial breaks, the Globe for Best Actor in a Drama went to none other than “Manchester by the Sea” star Casey Affleck, who is still dogged by accusations of sexual harassment. Contradictions, indeed.

The bizarre choices revealed themselves early in the awards show telecast, when the Best Supporting Actor in a Drama honor went to Aaron Taylor-Johnson for “Nocturnal Animals,” even though Mahershala Ali set screens ablaze with his performance in “Moonlight.”

“Moonlight” would go on to secure the Globe for Best Drama, but Ali's snub still smarts.

When Billy Bob Thornton won the Best Actor in a TV Drama award for Amazon’s “Goliath,” it seemed like the standard TV cluelessness was afoot yet again.That also appeared to be the case for the selections for Best Actor in a Limited Series or Motion Picture Made for Television (Tom Hiddleston), Best Supporting Actor (Laurie) and Best Supporting Actress (Olivia Colman).

The Hollywood Foreign Press Association also bestowed much-deserved wins upon FX’s “Atlanta” for Best Comedy and its star Donald Glover in the Best Actor in a TV Comedy category, as well as — shock! — “Black-ish” actor Tracee Ellis Ross. Thus Ross became the first black woman to win a Globe for Best Actress in a TV Comedy since Debbie Allen pulled off that feat in 1982. (For that matter, the ABC star became the third African-American woman to secure a nod in the category; Nell Carter was nominated in 1984.)

“This is for all the women, women of color and colorful people whose stories, ideas and thoughts are not always considered worthy and valid and important,” Ross declared.

The Globes almost always contain political lightning-rod moments, even in relatively stable years. There are sure to be pundits who will critique the evening’s overt political overtones. But if ever there were a time in which the industry needed to spell out its intent to honor and defend freedom of speech and expression, it is now.

And if its host isn’t up to the task, the next best tactic may be to follow the rest of Hollywood’s lead. Step back, and let Streep show us how it’s done.