The Obamacare merry-go-round: Repeal, delay, replace, repeat — where it ends, nobody knows! 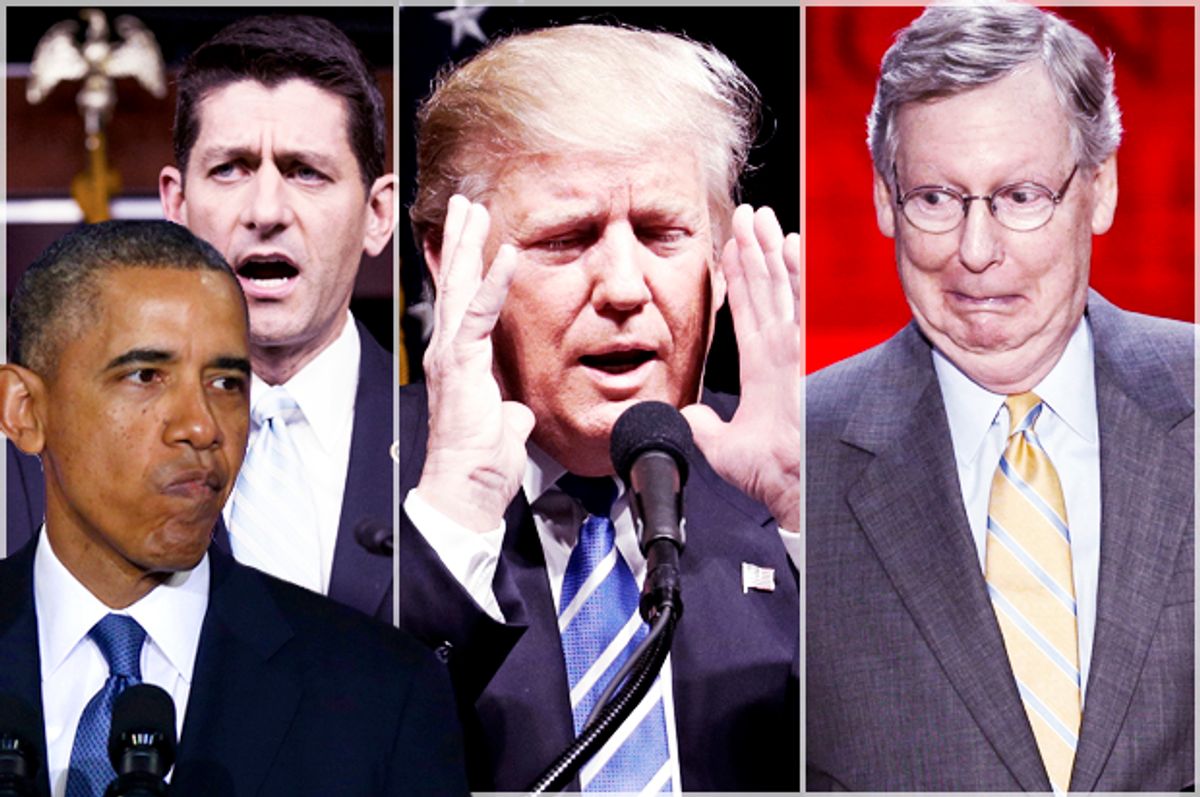 On Monday night a headline writer at New York magazine may have jumped out ahead of himself in titling a piece by Jonathan Chait "Obamacare Repeal Might Have Just Died Tonight." But it is hard to blame him. At this point the twists and turns of this saga are harder to follow than “Gravity’s Rainbow.”

Still, Chait was not the only writer wondering whether the Republicans' cherished plan to repeal Obamacare might indeed be kaput. Sarah Kliff of Vox wrote on Tuesday that the law’s undoing, currently caught in the tug-of-war between Republicans who want to repeal and replace it right away and those in the repeal-and-delay camp, might fall into the yawning chasm separating the two groups and drown in a fast-moving river of liberal Schadenfreude. Jennifer Rubin, who is no one’s idea of a liberal, also suggested in The Washington Post that the mixed signals coming from Republican leaders might be killing the chances of repeal and that the best course of action now for the GOP would be to “regroup” before moving forward.

The basis for predicting the death of the repeal movement emanates from two directions. The first is the incoherent messaging coming from congressional leadership. Senate Majority Leader Mitch McConnell and House Speaker Paul Ryan have pushed for repeal and delay, assuring Americans that this will not harm them because there will be a “transition period” of an indeterminate length before an Obamacare replacement is enacted even while also claiming that Obamacare is “collapsing under its own weight,” necessitating an urgent “rescue mission” to get rid of the law. McConnell and Ryan have made zero effect to reconcile the tension in their position.

The second source of confusion is the disconnect between leadership and rank-and-file Republicans, who have been in open revolt against the leadership’s plans. This week seven different senators pushed for repeal-and-replace, which would mean no repeal vote without a replacement plan ready to go. One senator, Rand Paul, claimed that Donald Trump was on board with this idea, which Trump himself seemed to confirm on Tuesday when he told The New York Times that a replacement plan must arrive within weeks of the repeal.

Adding to the confusion, Trump also said he was unwilling to put off the repeal vote past next week, which contradicts the members of Congress who have been demanding a delay on the repeal vote until March, to give them time to debate and coalesce around a replacement plan.

So really there is a third option besides repeal and delay and repeal and replace. Call this one the delay-and-repeal-and-replace-or-possibly-delay-repeal-again plan, depending on how the search for a replacement goes between now and March. (Remember that writing the original bill took a solid year.)

While all this was going on Tuesday afternoon, Sen. Ron Johnson, R-Wis., appeared to float a fourth possibility during an interview on NPR. As best I can tell, this is a combination of both repeal and replace and repeal and delay, whereby fixes to Obamacare would be made in a piecemeal fashion while an overall replacement plan is crafted according to some as-yet-undetermined timeline — at which point Congress will pass a repeal.

Let’s call this option the repair while delaying repeal and then repeal and replace plan. Still with me? Or have your eyes rolled back into your head?

Simply put, what has happened with rapid speed is that the GOP’s seven years of apocalyptic bullshit about the Affordable Care Act have crashed headlong into reality. On one side you have Republicans who probably always knew that Obamacare was here to stay but found it to be a handy cudgel with which to beat Democrats over the head. Now, having won unified control of the government, they find they are suddenly bashing their own skulls. This group includes Ryan and especially McConnell, the ultimate practitioner of cynical manipulation in his pursuit of power.

On the other side, there are the Republicans who seem to genuinely believe that Obamacare is a mortal threat to the republic and who view blowing it up as an urgent mission. This group includes the House Freedom Caucus and Rand Paul, who is firmly in the repeal-and-replace camp and is pushing for Congress to adopt his replacement plan. (Spoiler alert: The key ingredient is freedom!)

Also in this second camp is our president-elect, who apparently views adopting a repeal and replace plan as being as simple as sending out a tweet on the subject. This is an extension of the idea that repealing Obamacare is an urgent priority, something the GOP has pushed for years and that Trump has fully bought into, and his inability to understand or care about the chaos an immediate repeal would unleash.

There is a chance all this confusion could really kill repeal. Obamacare has been pronounced dead many, many times — remember when Scott Brown’s election to Ted Kennedy’s old Massachusetts Senate seat was its death knell? — only to survive and, yes, to show results in lowering the uninsured rate and slowing the rate of health-care cost inflation, two of its major goals.

What also seems possible is that the GOP will repeal Obamacare and replace it with a rushed, poorly thought-out plan that creates chaos. In other words, if you thought Obamacare was an unwieldy, jury-rigged mess of a law, wreaking havoc as it shambled across the dystopian landscape of America’s health care system, buckle up. The Republican replacement plan, should the party ever manage to agree on one and pass it, will be astronomically worse.