American Apparel moves to Canada — where will its hoodies be made now? 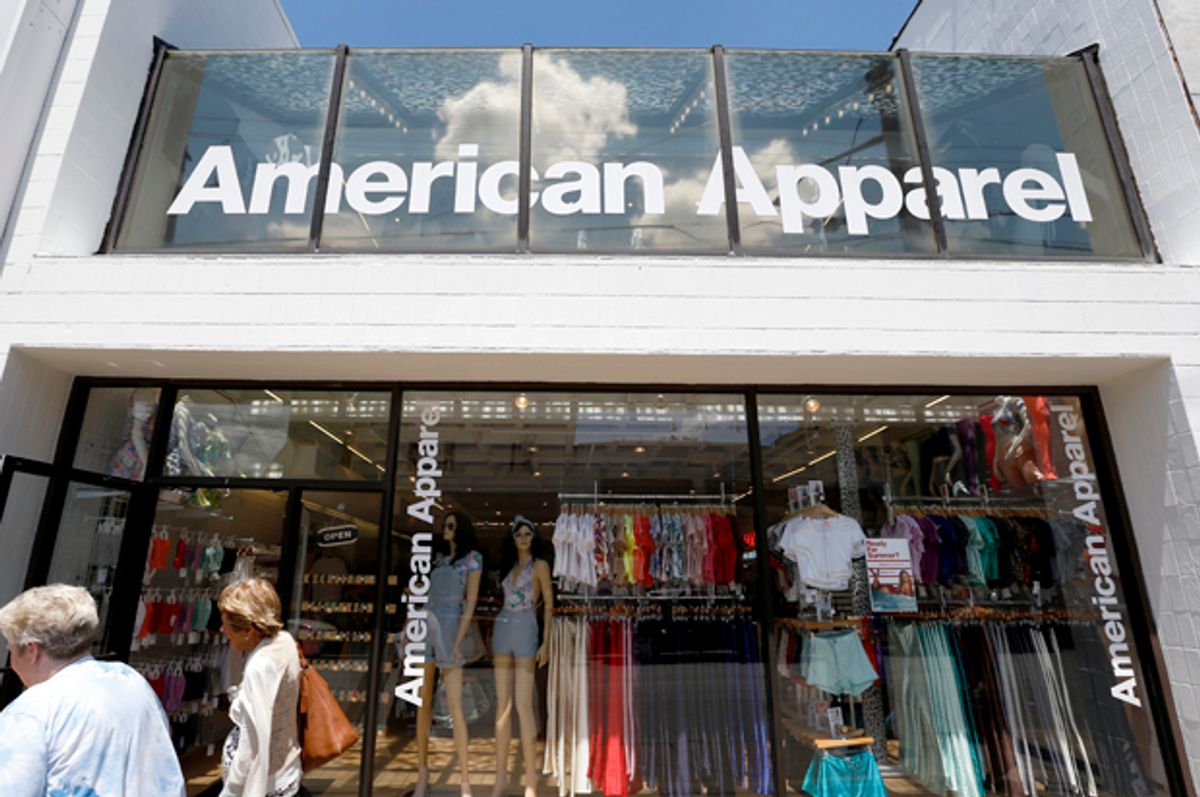 Just a decade ago, American Apparel was a darling of the apparel industry, rising from its roots as a small Montreal T-shirt importer to a Los Angeles-based “Made in the U.S.A.” clothing manufacturer and retail powerhouse. Thanks in part to its racy and controversial “Lolita” ad aesthetic, twenty-something hipsters of the early Naughties flocked to the company’s logo-free hoodies, sheer bodysuits and retro underwear.

But thanks to the Great Recession, financial mismanagement and inability to adapt fast enough to changing fashion trends — not to mention fallout from founder Dov Charney’s alleged sexual impropriety with female employees — American Apparel hasn’t turned a profit since 2009. And it fell into bankruptcy in November for a second time in slightly more than a year.

On Tuesday American Apparel returned to its Canadian roots when Montreal-based Gildan Activewear announced it had successfully bought American Apparel at auction for $88 million in a bidding process that had generated interest from online retail behemoth Amazon, Forever 21 and others, according to Reuters. Gildan’s initial stalking-horse bid was $66 million.

A Gildan spokesman told Salon on Wednesday that it extended a limited license that will let American Apparel’s 110 retail outlets and its e-commerce site continue operations for the time being.

The American Apparel deal is the first one of the year that could raise a new set of concerns about President-elect Donald Trump’s efforts to punish companies that move factory jobs from the U.S. So far, Trump has targeted his ire at U.S. companies, using his favorite form of public communication, Twitter, to call them out one by one for sending manufacturing work to Mexico. Companies that have faced Trump’s tirades include air conditioner maker Carrier and automakers Ford and General Motors. Trump has also taken false credit for some companies' decisions to keep or create jobs in the United States.

“There will be a major border tax on companies that are leaving and getting away with murder,” Trump said Wednesday during his first press conference in 167 days, reiterating his stance to tax imports at the border, a decision that will require congressional approval.

But what happens when a foreign company with existing plants both outside and inside of the United States purchases a bankrupt U.S. manufacturer? Could Trump’s policies make them think twice?

“Of course. He’s going to make everyone think twice,” Mauro Guillen, a professor of international marketing and the director of the Joseph H. Lauder Institute at the Wharton School of the University of Pennsylvania, told Salon. “What Trump has been saying and doing runs against one of the Republican principles that less government intervention is better. In the Republican Party there is a very pro-free-trade faction; most of them are pro-free trade. This whole thing is so against the most basic Republican principles.”

Guillen said Americans will have to wait to see how the next secretaries of the treasury, commerce and state departments, as well as GOP lawmakers, respond to Trump’s threats of hefty import taxes that have already set off alarm bells in import-dependent sectors, including apparel.

Gildan’s purchase agreement covers American Apparel’s assets, including most of its manufacturing and distribution equipment. Gildan bought American Apparel's existing inventory in a separate deal. But the company has declined the option to assume the leases of two Los Angeles manufacturing facilities that employ nearly 1,300 factory workers.

Gildan also declined the lease on American Apparel’s headquarters, which employs nearly 2,200 people. The downtown offices will continue to manage the company's retail operations and website, but in December American Apparel warned all its Los Angeles-area employees that they may lose their jobs. Though the company might retain some operations in the United States, analysts expressed skepticism to the Los Angeles Times that any of American Apparel’s current U.S. manufacturing workers would keep their jobs, speculating that Gildan would likely move factory work to its existing facilities in Honduras and the Dominican Republic.

When asked by Salon whether political factors will play a role in the company’s decisions about where future American Apparel brand clothes will be made, company spokesman Garry Bell declined to comment but issued the following emailed statement: “Gildan has a strong history of commitment to U.S. manufacturing, with more than $400 million invested over the last four years and now more than 3,000 U.S.-based employees. We are also pleased to be the largest domestic consumer of U.S. cotton, creating positive economic impacts for proud U.S. cotton farmers.” More information on the deal will be disclosed on Feb. 23 during the company’s annual report presentation, he added.

Scott Paul, president of the Alliance for American Manufacturing, a nonprofit that advocates for policies that promote growth in domestic manufacturing, said he’s less concerned about foreign companies making these kind of acquisitions, especially if they result in a net gain in American jobs. But, he said, American Apparel has built its brand around domestic manufacturing; it’s right there in the name.

“Part of their brand value is that its clothes are made in America,” Paul told Salon. “I don’t know how this will appeal to American Apparel’s core audience. Does the fact that it’s changing ownership to a Canadian company and possibly changing its sourcing policies impact how customers feel about it? That’s an open question.”

And what about Trump’s tactic of singling out U.S. companies that send manufacturing jobs abroad?

“Shining a light on bringing jobs back to America is a good thing, but this company-by-company dealmaking and this Twitter strategy is not a replacement for sound public policy,” Paul added.