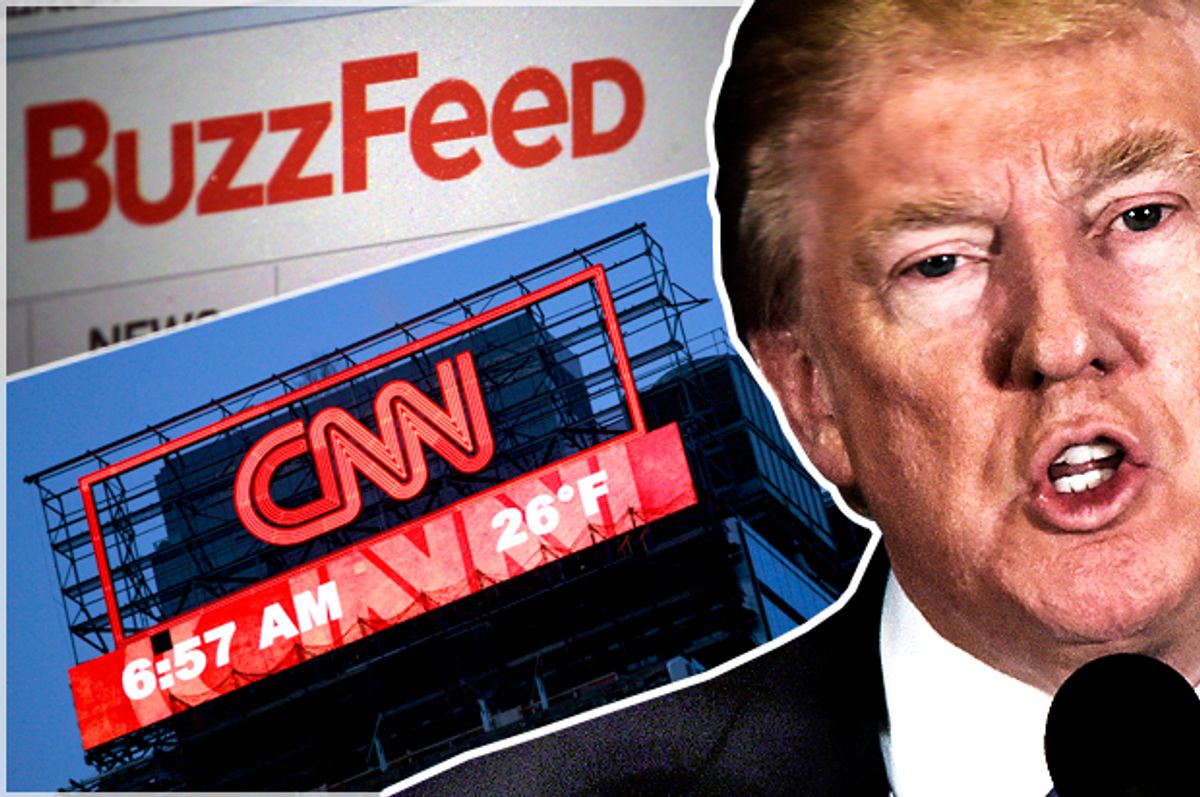 During the 1990s the relentless Republican efforts to find anything that could be used to attack President Bill Clinton — Monica Lewinsky and Whitewater and Vince Foster and whatever else — eventually backfired on the GOP once the public got sick of the whole thing.

“Scandal fatigue” quickly became a buzzword you couldn’t escape, largely because it was so useful in explaining how Clinton, who was elected with less popular support than Donald Trump was, managed to hang onto approval ratings higher than 60 percent for most of his presidency. In fact, as the allegations against him led to his impeachment by the House and trial in the Senate, Clinton became even more popular.

It’s starting to appear that something similar is at work in the rise of Donald Trump to the presidency. BuzzFeed editor-in-chief Ben Smith played right into that on Tuesday when he decided to publish a loose collection of rumors and innuendo about Trump and Russia that’s been circulating along the margins of mainstream politics for quite some time.

This compilation, said to have been written by a former British intelligence officer named Christopher Steele, is filled with basic factual errors, including misspellings. It’s the kind of thing that is routinely generated by intelligence agencies, both public and private. (Steele is now a private security consultant.) The FBI is known to keep similar documents about major public figures and was particularly known for the practice during the long reign of the agency’s first director, J. Edgar Hoover.

The nature of Trump and his associates’ relationships to the government of the Russian Federation is certainly a legitimate topic, especially given the repeated pro-Trump statements made by Russian President Vladimir Putin and his country’s apparent role in the cyber-espionage attacks against Democratic Party officials (an activity that even Trump himself now acknowledges).

Many of these stories, such as those about Trump’s former campaign manager Paul Manafort and secretary of state nominee Rex Tillerson, have been based on verifiable facts and solid reporting that could be duplicated by people with the skill and the time to do so.

There’s nothing wrong with trying to compile a list of rumors and possible facts about important figures, especially people running for president. What’s wrong is distributing that information to the public as news, with little or no editorial judgment or discrimination. Much of the point of these confidential reports is to know “what’s out there” as unsubstantiated gossip or plausible hypothesis, not what is necessarily true.

That’s a critical distinction and it’s one that professional journalists are supposed to respect, regardless of whom they’re covering.

According to a memo that Smith sent BuzzFeed employees on Tuesday, however, he doesn’t think his website should operate by such standards.

“Our presumption is to be transparent in our journalism and to share what we have with our readers,” he wrote.

“We have always erred on the side of publishing,” Smith continued, referring to the fact that the Trump-Russia documents had been circulating “at the highest levels” of politics.

It’s a terrible argument and one that could be used to justify publishing literally anything about a person. In fact, it's a tactic that Donald Trump frequently uses. The notion that “many people are saying” something about anything, no matter how inane or false, has been a frequent Trumpian rhetorical device.

“A lot of people are saying” that President Barack Obama is a Muslim, Trump said in September 2015. It’s something that he personally has hinted at several times during his short political career.

The former “Celebrity Apprentice” host regularly used a version of that phrase in alleging that Obama was not born in the United States. He has also used it to spread the claim that Obama was unwilling to crack down on Islamist terrorist organizations.

Smith’s willingness to adopt Trump’s worst rhetorical trope in the name of embarrassing him will do nothing to harm him at all. In fact, it can only help Trump, given the pugilistic populist demeanor that the former WWE guest star has cultivated throughout his career. He's constantly telling his supporters that the world is against him and them; stories like this just make Trump's attempts to do so easier.

The BuzzFeed documents will also serve to muddy the waters in a way that can only help Trump. As Glenn Greenwald noted on Wednesday, mainstream journalists are squandering their credibility:

When it comes time to expose actual Trump corruption and criminality, who is going to believe the people and institutions who have demonstrated they are willing to endorse any assertions no matter how factually baseless, who deploy any journalistic tactic no matter how unreliable and removed from basic means of ensuring accuracy?

Anti-Trump journalists’ habit of intermingling serious stories with picayune nitpicks and outright falsehoods — such as the discredited notion that Russia hacked into the American electrical grid — only serve to enable Trump and make his supporters (and even some non-supporters) think all allegations against him are “fake news.”