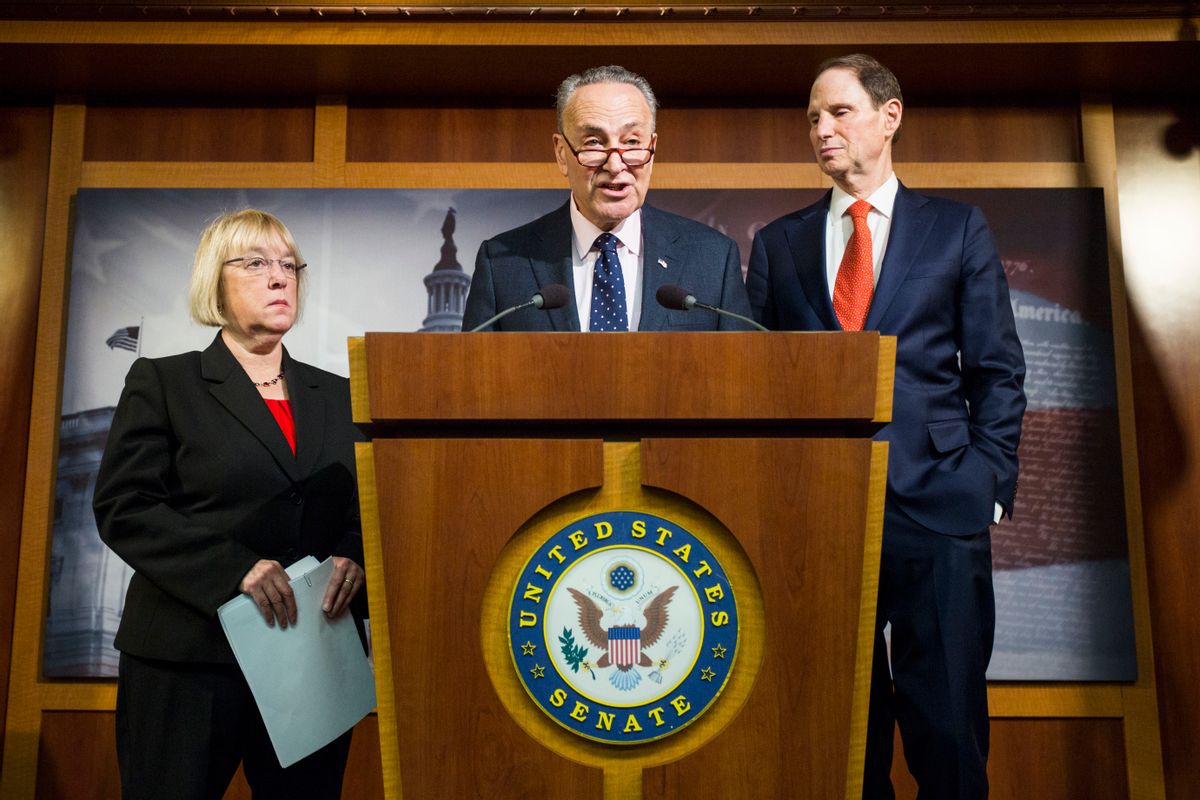 Republicans in Congress rammed through a budget resolution on Wednesday night to force both the Senate and House of Representatives to begin repealing large parts of the Affordable Care Act. In the process, Democrats forced Republicans to block measures that would protect Medicare, Medicaid, mental-health services and womens' access to health care.

"Put this irresponsible and rushed repeal plan aside," said Senate Minority Leader Chuck ­Schumer, D-New York, on the Senate floor as he prepared to vote against the measure. "Work with us Democrats on a way to improve health care in America, not put chaos in place of affordable care."

Sen. Claire McCaskill, Democrat from Missouri, echoed these thoughts: "Because there is no replace, I vote no."

Al Franken, Elizabeth Warren among the parade of Democrats drowned out when defending Obamacare. pic.twitter.com/lkhcvxM0Tw

Even Republicans were concerned about the so-called votearama. "We just want more specifics," said North Carolina Rep. Mark Meadows about the Senate measure that could appear before his chamber as soon as Friday. "I’m willing to take a vote today if we have the specifics. So it’s not as much slow it down for slowing-it-down purposes as it is, we need to know what we’re going to replace it with."

Sen. Rand Paul, Republican from Kentucky, voted against the budget resolution on the grounds that there was no replacement bill.

As we repeal Obamacare, we would be wise to vote on its replacement at the same time. Read more: https://t.co/VCFqSBnfYZ pic.twitter.com/GSpZhlsL8h

Meanwhile, the Republican leadership responsible for pushing through the repeal has insisted not only that doing so is necessary, but that they will handle it responsibly.

"We have to get to business," President-elect Donald Trump told The New York Times in a telephone interview on Tuesday. "Obamacare has been a catastrophic event."

Trump added that he hoped the repeal vote would be completed "some time next week" and that a replacement would be passed "very quickly or simultaneously, very shortly thereafter."

This attitude was echoed by House Speaker Paul Ryan, who has worked very closely with the president-elect on this issue. "It is our goal to bring it all together concurrently," Ryan said.

Perhaps the statement which best summed up the Republican position on the Affordable Care Act came from Sen. Mike Enzi, Republican from Wyoming.

"The Obamacare bridge is collapsing and we are sending in a rescue team and we will build new bridges to better healthcare and then finally close the old bridge," Enzi said.

Enzi's statement was somewhat undercut by the Republicans' refusal to support Democratic amendments which would have preserved crucial aspects of the law, which made it seem like Republicans were instead trying to blow up the old bridge first.

Voted down tonight in Senate

This isn't to say there wasn't some crossing of party lines. When Sen. Amy Klobuchar proposed an amendment "to establish a deficit-neutral reserve fund relating to lower prescription drug prices for Americans by importing drugs from Canada," it was defeated 46 to 52, with 12 Republicans supporting the measure and 13 Democrats opposing it.

It remains to be seen whether Republicans will actually be able to replace the Affordable Care Act with a substitute that won't rip away health insurance for millions of people.