Trump looks and acts guilty, compares America to Nazi Germany — and clings to Putin's leg like a drowning retriever 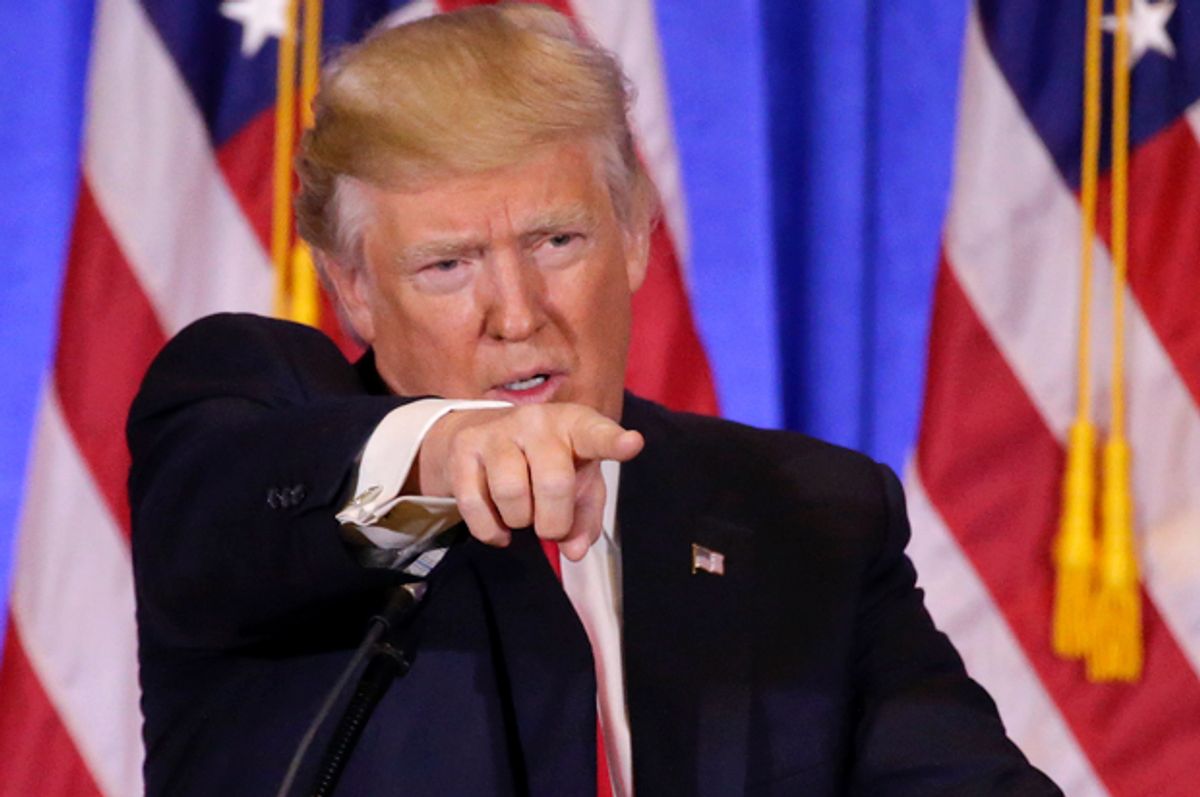 We haven’t performed a full search of the transcripts, but this week could very well mark the first time that an incoming president has successfully trampled Godwin’s Law. The informal rule, invented by author Mike Godwin, suggests: "As an online discussion grows longer, the probability of a comparison involving Hitler approaches one."

Tweeting once again in the early morning hours, President-elect Donald Trump observed that leaks from the intelligence community, reported by CNN and alleging that Russia has been collecting salacious blackmail material on the incoming chief executive, are reminiscent of the Third Reich.

He’s the incoming president with autocratic tendencies. Why’s he asking us?

The Nazi tweet, among many others, illustrates an embattled president-elect — one with historically dismal approval ratings and someone who’s a political novice, bungling and botching his way through what could be the most devastating political meets constitutional crisis in modern American history, perhaps fully eclipsing the Watergate, Iran-contra events and the Lewinsky affair combined.

In this case, Team Trump, possibly acting as a consequence of the aforementioned blackmail material, is vocally flacking for Putin and the Russian intelligence services in opposition to the flawed but patriotic U.S. intelligence community — not to mention the American press.

This response is naturally a fantastic way to goad other leakers into dropping further evidence to the contrary. Smart! Additionally, by blurting crap like this, Trump is directly questioning the veracity of the intelligence community tasked with protecting American interests here and abroad. It’s entirely possible that the 35-page document published by BuzzFeed and other outlets, which features all sorts of sloppy allegations about the president-elect’s personal behavior, was deliberately leaked in direct response to Trump’s ongoing social media tirades about the intelligence community. Anyone with even a basic understanding of how the intelligence community operates knows that its first mandate is to defend the nation, not its president. Therefore, any indictment coming from a high-profile figure like Trump will never be met with complacency.

Grade-school level politics — systems with proven track records of efficacy — dictate that the best response to a scandal of this magnitude is to do the following: 1) Express outrage at the attack on American sovereignty, 2) demand an independent investigation of the charges and 3) vow to punish those responsible. It’s as simple as the rules to Candy Land. Do these three things, then move on. Political problems solved. Trump and his people appear to be totally unaware of the correct reaction or are cognizant yet foolish enough to ignore it.

But, of course, 62 million Americans nihilistically voted for an erratic, undisciplined, rank amateur with zero expertise in how to cope with a major political crisis, among other things. Sixty-two million misled citizens voted for a man who thinks the most appropriate response to the growing roster of Russia hacking charges is to make matters far worse for himself and his administration. (Trump has known about many of these for months and could have formulated a better response.) By vocally denying the charges, Trump sounds horrendously guilty, even if the most damning charges turn out to be nothing but hot air.

Perception and optics are everything in politics, and crap like that Trump tweet above about how it's all a “COMPLETE AND TOTAL FABRICATION, UTTER NONSENSE" just reeks of guilt. Dost thou protest too much, Mr. Trump? Literally the first words to drop on Trump’s Twitter feed on Wednesday morning were “Russia just said . . . ” Russia. The first statement from the incoming president was to desperately wrap his orange limbs around Vladimir Putin’s lower leg. Russia’s denial became Trump’s denial, and yet we’re supposed to believe that Trump isn’t acting under pressure from Moscow? That’s rich.

The broader problem here is, of course, one we’ve been discussing for many months: Trump continues to prove himself to be totally incapable of behaving in a way befitting a president. Not only does his ascendency mark the death of being presidential, but his political incompetence makes us all vulnerable to unforced errors that could exponentially augment the roster of Trump-era disasters, with millions of lives hanging in the balance. If Trump is this incapable of conducting remedial damage control, how will he handle a much more complicated crisis — one that could include nuclear weapons, a terrorist attack or an economic calamity not unlike the Great Recession? Worse, if the reports are true and Russia possesses reams of incriminating blackmail material on Trump, how do we know that he and his party are acting in our best interest and not Putin’s?

Americans of both parties have a responsibility to watch this unfolding story very carefully, if for no other reason than to double-check Trump’s actions as he flails, blurts and whines his way through this atmosphere of deepening crisis.

It’s also worth noting, by the way, that the corollary to Godwin’s Law is this: Whoever first invokes Nazi Germany in an online dispute automatically loses.