Jeff Sessions and the Southern white man's burden: His cluelessness is precisely the problem

While Sessions and Lindsey Graham congratulated each other for not being racists, John Lewis taught some history 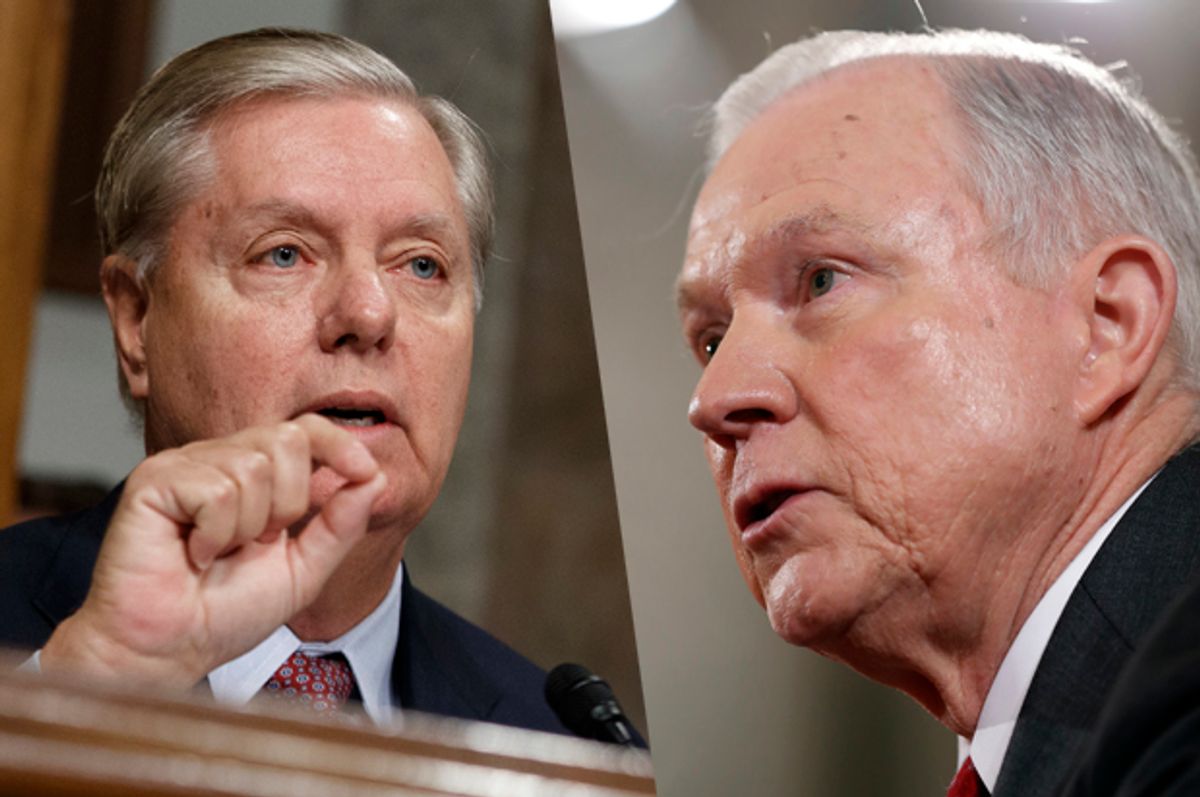 Even for those who closely follow politics and are used to the claims of victimhood constantly emanating from conservatives, one moment between Jeff Sessions and Sen. Lindsey Graham during Sessions’ confirmation hearing on Wednesday stood out. It came toward the end of 10 minutes of questions, when the two men gabbed like a couple of good ol' boys sitting on the porch of the general store while a hound dog napped in the corner and flies swirled lazily around their heads.

Graham: I’m from South Carolina, so I know what it’s like sometimes to be accused of being a conservative from the South. That means something other than you’re a conservative from the South, and in your case people have fairly promptly tried to label you as a racist or a bigot or whatever you want to say. How does that make you feel? This is your chance to say something to those people.

Sessions: It does not feel good. . . . Senator Graham, I appreciate the question. You have a Southern name, you come from south Alabama; that sounds worse to some people. When I came up as a U.S. attorney, I had no real support group. I didn’t prepare myself well in 1986 and there was an organized effort to caricature me as something that wasn’t true. It was very painful.

There is no worse discrimination in America than that leveled against Southern white men with funny-sounding Southern names, says a senator applying to work in the administration of a man who gained a foothold in the Republican Party through his promotion of racist birther theories about the origins of the current president and his funny-sounding African name. It takes some cojones to be a sitting senator and the likely next attorney general of the nation, to hold a personal net worth of $7.5 million and to still present oneself as a victim because of your accent and place of birth, with no sense of irony whatsoever.

Sessions acknowledged that he had seen discrimination when he was growing up in Alabama, which made his little display of self-pity even more appalling. Particularly when you hold it up next to the testimony against his nomination offered to the Judiciary Committee by Rep. John Lewis, D-Ga., a leader of the civil rights movement of the 1960s and someone who famously had his skull fractured on the Edmund Pettus Bridge in Alabama while protesting segregation.

Segregation was the law of the land that ordered our society in the Deep South. Any black person who did not cross the street when a white person walked down the same sidewalk, who did not move to the back of the bus, who drank from a white water fountain, who looked a white person directly in their eyes could be arrested and taken to jail.

The hearings come after weeks of efforts by the Trump team and its allies to try to refurbish Sessions’ reputation in the face of his positions in favor of discriminatory policies like voter ID laws and the allegations of racism that first emerged during a 1986 hearing about his nomination to become a federal judge. Graham was even enlisted in the effort, going on television multiple times to warn Democrats to not paint Sessions as a racist.

But all this misses the point, as is to be expected when conservatives are confronted on matters related to the civil rights of people of color, which to Republicans are always a zero-sum game where gains for African-Americans mean somehow that whites will lose the privilege of whiteness. It is the animating drive behind much of the right-wing media’s rhetoric on every racial issue, from the Black Lives Matter movement to criminal justice reform and even Obamacare.

No, it is his views on racial matters, such as supporting voter-ID laws that disenfranchise mostly minority voters, or soft-soaping the entrenched discrimination that causes police departments to be put under consent decrees, or even his opposition to removing Confederate flags from public view. All those things speak to a lack of empathy for traditionally marginalized populations – which, whatever he and Lindsey Graham think, are not a group that includes Southern white male conservatives. And this makes him a poor choice for attorney general.

As Lewis also said in his testimony on Tuesday:

It doesn’t matter whether Sen. Sessions may smile or how friendly he may be, whether he may speak to you. We need someone who will stand up and speak up and speak out for the people who need help, for people who are being discriminated against. . . . We all live in the same house, the American house. We need someone as attorney general who is going to look out for all of us, not just some of us.