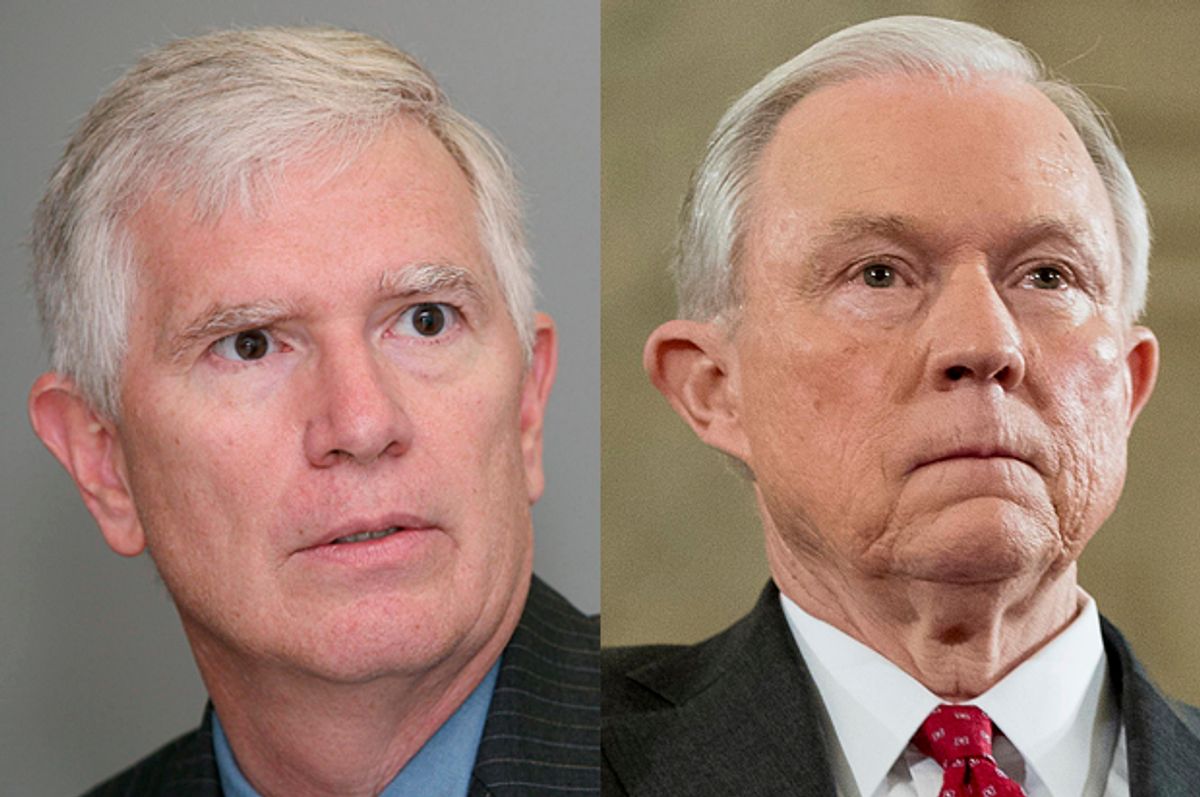 Rep. Mo Brooks, a Republican from Alabama, is claiming that Democratic criticism of Donald Trump's nominee for attorney general, Sen. Jeff Sessions of Alabama, is part of a "war on whites."

"It’s really about political power and racial division and what I refer to, on occasion, as the ‘war on whites,’" Brooks said Wednesday on WBHP 800 Alabama radio. "And the Democrats are not shy about lying in order to achieve their political goals."

Brooks later added, "And if they have to besmirch the reputation of a good man, Jeff Sessions, in order to achieve their political goals, they, as a group, are not hesitant to do so."

Finally, Brooks argued that Democrats only discuss racism because they wish to earn African-American votes against Republicans.

"They are trying to motivate the African-American vote to vote bloc for Democrats by using every Republican-is-a-racist tool they can envision, even if they have to lie about it," Brooks said.

In addition, Sen. Tom Cotton, a Republican from Arkansas, tried to dismiss Wednesday's anti-Sessions testimony from Sen. Cory Booker, D-N.J., as "far-fetched." To do so, he made a reference on his Twitter account to T-Bone — a joke that could be construed as racist, although more likely a reference to an allegation that Booker had fabricated a story about a drug dealer who had threatened his life.

Some might call the very notion that whites can be an oppressed group in American society inherently racist, but Brooks also glided over Sessions' alleged history of attempting to suppress African-American voter turnout. (Based on these allegations, Coretta Scott King had written a letter opposing his appointment to a federal judgeship in 1986.) They also prompted Booker to make the unprecedented move of testifying against one of his Senate colleagues.

"Sen. Sessions has not demonstrated a commitment to a central requisite of the job: to aggressively pursue the congressional mandate of civil rights, equal rights, and justice for all of our citizens," Booker told the Senate Judiciary Committee on Wednesday. "In fact, at numerous times in his career, he has demonstrated a hostility towards these convictions and has worked to frustrate attempts to advance these ideals."

Sessions' controversial record also includes criticizing the Voting Rights Act of 1965, criticizing the Justice Department for promoting and protecting minority voting rights, and supporting racially discriminatory immigration policies, which was cited by Senate Minority Leader Chuck Schumer as one of the main reasons for his decision to oppose Sessions' confirmation.