Hollywood activism: What is it good for?

When Meryl Streep spoke out against Trump, she joined a long tradition that a lot of people hate 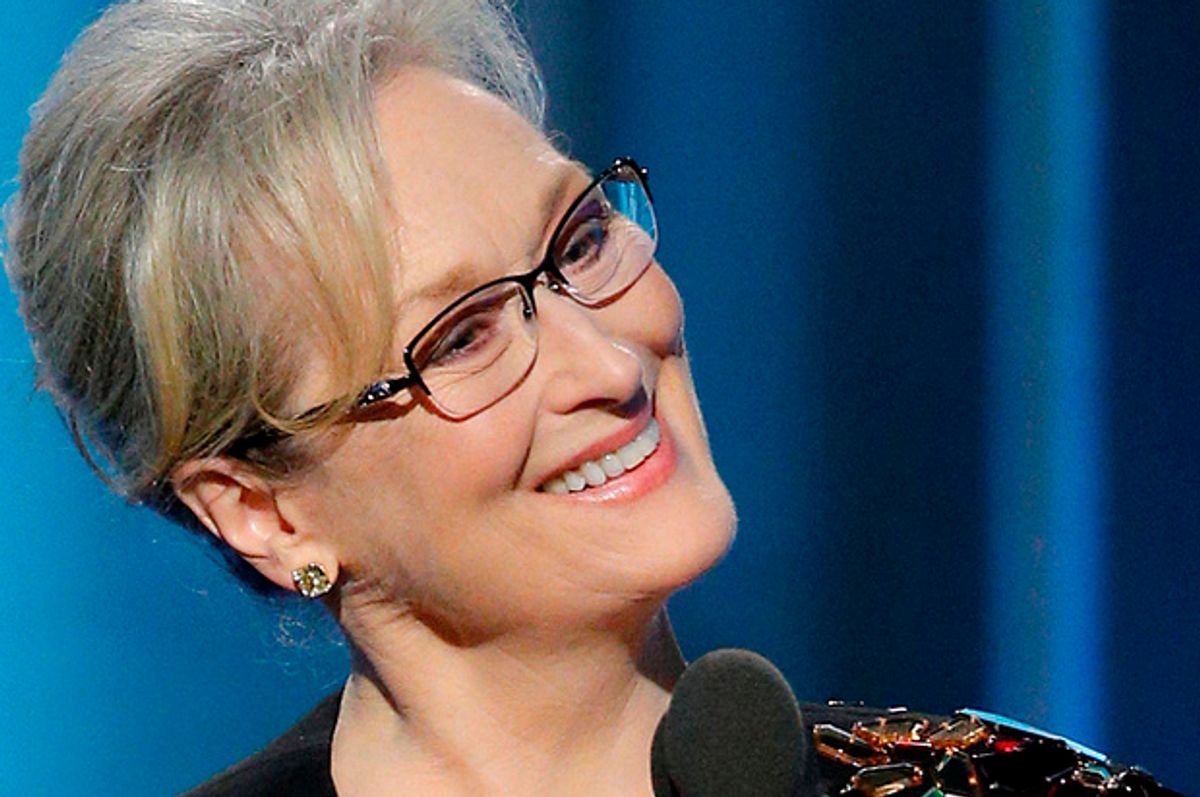 Blue hearts melted last Sunday night when Meryl Streep gave a wry and impassioned speech about the the rich diversity of Hollywood and her perceptions of incoming president Donald Trump's less appealing qualities. Streep already enjoyed a substantial following as an actress, but her eloquent address (“there was one performances this year that stunned me; it sank its hooks in my heart, not because it was good") brought her even more fans. The movie and television insiders gathered inside the Beverly Hills hotel laughed and clapped; Robert De Niro sent her a letter of praise soon after.

But outside the blanket of blue, Streep’s speech did not ring quite so sweetly. To many conservative news organizations, including Breitbart, the actress was offending and insulting half of America. To many Americans, she was “politicizing” an awards show. Some were angry; some just grabbed the remote, rolled their eyes, turned off. Sixty-six million Americans, after all, voted for the subject of her scorn. That’s a lot of negative reviews.

In any case, it’s fair to wonder: Just how effective is this sort of thing? Does someone like Streep — or English actor Hugh Laurie, who joked about how the name of the group putting on the banquet, the Hollywood Foreign Press Association, might resonate with Republicans — change minds? Or do they just help educated, left-leaning moviegoers and TV watchers feel like they are politically active? And just how much of this, and the #OscarsSoWhite equivalents, can we expect at next month's Academy Awards ceremony?

The appearance of politics at Hollywood gatherings, especially awards shows, goes way back. When a producer of the film “Hearts and Minds” spoke about the Vietnam War at the 1974 Oscars ceremony, Frank Sinatra read a letter from fellow presenter Bob Hope calling the protest out of line and inappropriate.

But whether it’s Marlon Brando sending an activist for Native American rights to accept his best actor trophy, Patricia Arquette speaking out about equal pay for women or Chris Rock lamenting Hollywood's "sorority racism," the tradition is not going away.

Chances are that the upcoming Oscars ceremony — following the election of a president who is hostile to the movie colony’s traditional political and social views and after the maturing of new civil rights movements that include organizations like Black Lives Matter — will not be particularly serene or apolitical.

And chances are that the Academy will respond, in fact, with more — maybe significantly more — political speeches and social-justice moments than we got at the Golden Globe Awards this year. Creative types at the Oscars event may focus more on racial matters like police shootings and the lack of people of color in Hollywood than on the new president in general.

But it's likely that this year's Oscar ceremony will be one of the most political ever. Liberals and lefties in Brentwood and Brooklyn, Brookline and Berkeley, will laugh and high-five and sip their kombucha approvingly. Red staters and rural people will decide to watch something else that night or will reach for the remote when the speechifying starts.

Trump voters may scream or sigh or turn off their sets. But if the man we've see fuming on debate stages — and at press conferences and in front of cheering throngs at jingoistic-rockabilly rallies — is not a fictional creature concocted by Philip K. Dick and is actually a real human being, it’s pretty clear that the words of people like Meryl Streep get under his skin.

Every political journal in the land — from The National Review to Mother Jones — could denounce this guy, and he'd just laugh it off. Who cares what those Beltway elitists think? But let an actor or musician attack him, and he blows his top.

Is that enough reason for Hollywood figures to bring politics into events that are purportedly devoted to artistry, aesthetics and cinematic careers? You betcha. Rave on, Meryl; you are getting under his skin, big time. This is the embattled 21st-century creative class's most enduring triumph. Why let up now?