HBO's "The Young Pope" makes high art for TV, but the result is less than divine 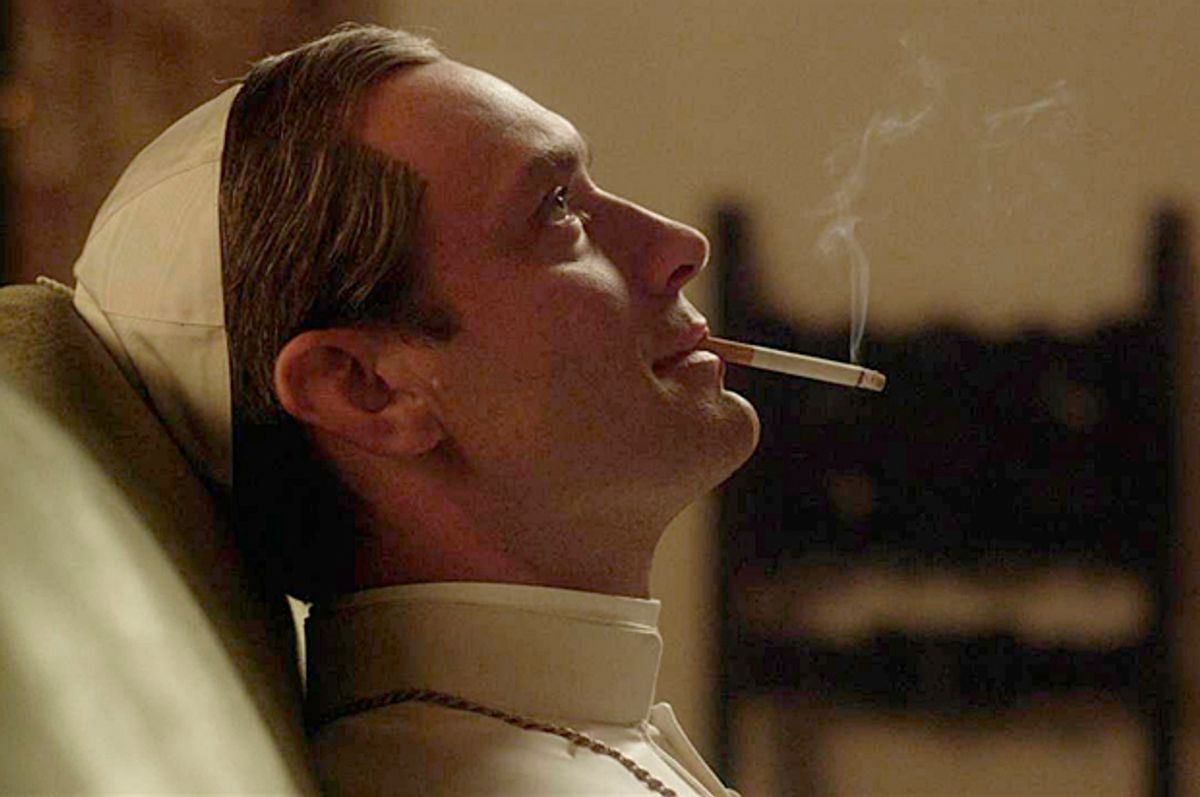 Prior to television’s so-called Platinum Age, referring to it as an art form might have gotten you laughed out of the most hoity-toity of rooms. Even nowadays some dismiss the stylistic strides that have been made in the medium, permanently relegating it to the realm of low culture.

Creating a quality television series is an art form, and that has long been the case. The medium’s most resilient frameworks are still utilized decades after their establishment, allowing talented auteurs to challenge, reshape and expand upon them. Formats exist to be shattered and rebuilt to accommodate innovation and cultural evolution.

Not all series rise to the level of great art, of course. Rarer still are series that effectively translate high art into the realm of television. And it is this second affliction from which Paolo Sorrentino’s limited series “The Young Pope” suffers.

There are 10 hours to “The Young Pope” airing over five weeks, beginning with its premiere Sunday at 9 p.m. on HBO, and followed by its second episode’s debut at 9 p.m. on Monday. The series will roll out in this way, airing on Sundays and Mondays until its run is spent. This enables HBO to briskly present it without relinquishing too much prime-time real estate — a wise strategy.  The idea of voluntarily enduring 10 hours of its gorgeous tedium brings on a headache.

“The Young Pope” deserves credit for allowing Sorrentino to experiment with the artistic possibilities of the medium. He brings a couture sensibility to his episodic approach from the opening scene, featuring an infant crawling over a mountain of other babies. Every frame and every shot with “The Young Pope” is crafted to maximize the crisp edges of its Vatican setting. The exquisite interplay of glorious brightness in stately rooms, the contemplative dimness within candlelit sanctums and the riot of colors in the Vatican’s gardens reflect a sense of spiritual jubilance and staid formality all at once.

In the same sense, the starched, unblemished white robes Jude Law wears gleam brightly in wide shots that accentuate his pope’s preference for physical distance. Separation is a tool his character Lenny Belardo, Pope Pius XIII, employs to affirm his position’s power and manipulate a sense of mystery to inflate the public’s sense of fascination and reverence.

Sorrentino further delineates Lenny’s penchant for order, and stratification, in his choice of extras and the look of the actors surrounding Law. Tight shots on the imperfect faces in the rabble gathered in Vatican Square — the plain nun with a prominent mustache, the child with small eyes lidded by deep epicanthic folds — make Law’s movie-star features take on a preternatural quality.

“The Young Pope” is a study in incongruity and contrast: A scene in which he dons his ornate robes, set to LMFAO’s ridiculous “Sexy and I Know It,” is as ridiculous as it is completely appropriate. Excess, as far as Lenny will take it, is only acceptable for God’s representative on Earth. It’s good to be the pope. And he knows it.

As visual art, “The Young Pope” has no peer. Punctilious cinematography and art direction does not make up for its conspicuous lack of a soul, however. The viewer may surmise that this is part of Sorrentino’s point, that the icy, egocentric cruelty with which Law infuses Lenny and the grim, unbending formality of Diane Keaton’s Sister Mary are reflective of the rigidity inherent to the institution.

But this slavish embrace of aesthetics, a philosophy that infects even the lacquered wooden delivery used by Keaton and other actors, fails to fulfill that very basic pact between a television creator and the viewer. That is, in exchange for our attention and time, we’ll get a story tailored to draw and hold our interest. Television can encompass an array of paradigms, but it is foremost a medium weighted toward the talents of storytellers.

The plot of “The Young Pope” portrays one possibility of what the papacy would become if it were to fall into the hands of a tyrant. Undoubtedly there are parallels to be made between Lenny Belardo, who takes the name Pius XIII, and America’s impenitent and churlish president-elect. Tough as it is to picture the next POTUS meditating on the transubstantiation of wine and a little cracker, it’s not beyond him to seethe over the conspicuous lack of Cherry Coke Zero in a massive feast prepared in his honor, as Lenny does.

Though the circumstances of Lenny’s election aren’t made explicit in the opening episode, it’s simple enough to imagine how and why the College of Cardinals would have chosen him. He’s the first American pope in history — youthful and handsome, the type of star that could reinvigorate a church perennially concerned about losing relevancy in a swiftly changing world.

But any assumption that Lenny’s youth would contribute to a modernization of the church is quickly blown to the winds. Lenny quickly establishes his aims to centralize the power of the Church, to control his image and re-establish a high wall between the Vatican and the masses. He is wholly unconcerned with good works, or fraternizing with the public, claiming that the church’s sole obsession should be with God, which leads to clashes with the old guard, led by Cardinal Voiello (Silvio Orlando).

Sorrentino contrasts Lenny’s perverse inflexibility with conversations and scenes that are outrageously surreal and contradictory. The order on the Vatican grounds is interrupted by the unpredictability of a kangaroo residing in its gardens. Smoking is prohibited inside its walls, but not for Lenny. His moods are malevolently transitory and mercurial, dams holding the libertine thoughts inside his head at bay.

“We are cement,” he tells his cardinals in one scene, “and cement doesn’t move.”

Sundry elements such as these yield extraordinary passages and moments which, in turn, have birthed a number of memes. They are frames, though, not scenes that hang together with enough flow or cohesion to make a viewer burn to spend 10 hours over five weeks in this miniseries’ pews.

Successful television efforts are the children of skill, discipline and inventiveness, and although their creators are devoted to realizing their specific visions, the best never forget the milieu or its audience. Sorrentino may not intend to cater to the habits of television viewers; the specificity with which he executes “The Young Pope” speaks to a brand of vision whose interest is the art as opposed to the venue in which it is presented. Consequently, it’s possible to appreciate the magnitude and originality of his extraordinary approach while admitting that it doesn’t effectively tell us the whole story, or the best one.