A retreat from the spotlight is as transformative as a death. Rush's retirement swan song will help fans let go 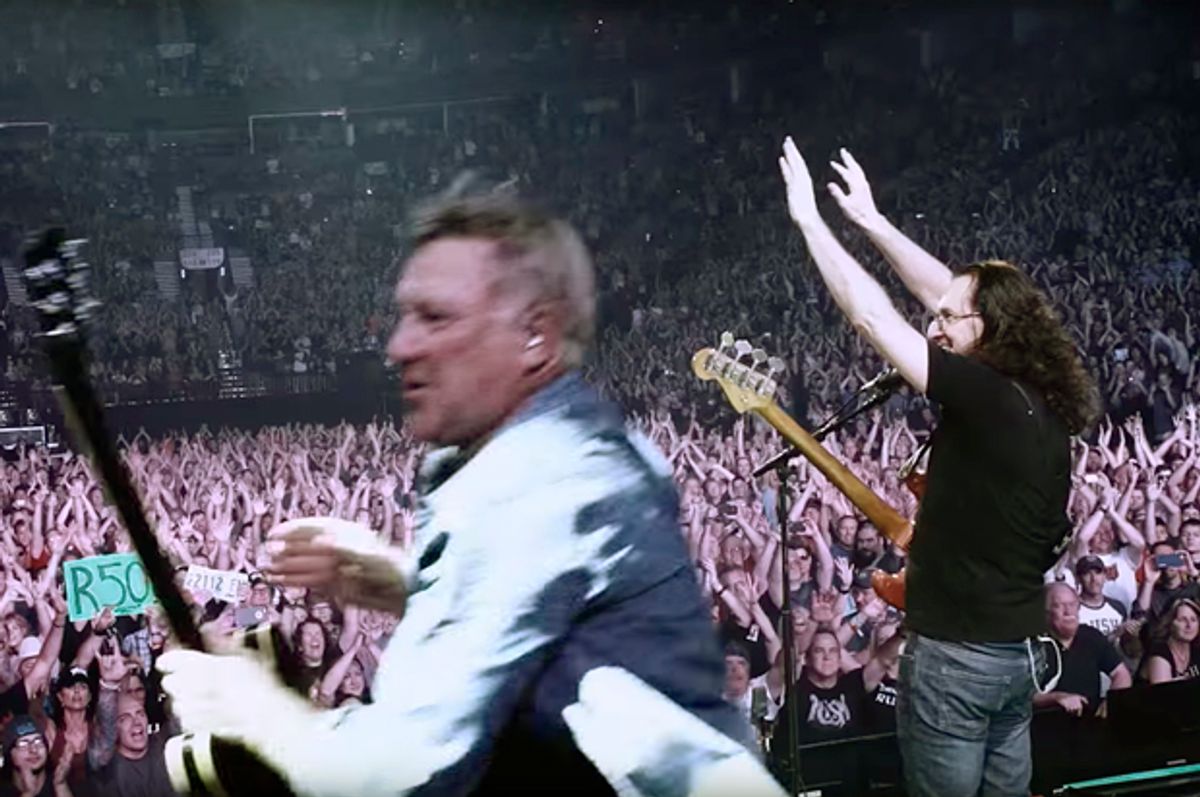 On Jan. 8, David Bowie fans around the world received a nice present for the Starman's 70th birthday: the "No Plan" EP, which contains three tracks from the sessions for Bowie's 2016 album "Blackstar" (“Killing a Little Time,” “When I Met You” and the title track) and the song "Lazarus" from the LP itself. A mournful video for the song "No Plan" also appeared. These releases were nevertheless tinctured with sadness: The unspoken subtext to the celebration was that the first anniversary of Bowie's death was looming two days later, on Jan. 10.

His sudden passing from cancer at the age of 69 kicked off a year when dozens of beloved musical icons died, many unexpectedly — Glenn Frey, Merle Haggard, Prince, Sharon Jones, Leonard Cohen and (on Christmas Day) George Michael, to name a few. Thus, "2016 was the year that public grief became a different phenomenon, somehow: more dense, more relentless, more urgent in its impact," Jude Rogers wrote in "Bowie, Prince, Cohen & The Quiet Power Of Public Grief," a trenchant article published on The Quietus. "It didn't help that deaths of cultural figures kept arriving like sudden storms, lightning striking from a recently clear sky, before the endless, low thunder."

The violent imagery is no exaggeration: At times the ongoing cavalcade of deaths felt like a boulder rolling down a mountain, accumulating dust and shaking loose other debris along the way. It's not like fans grew numb or accustomed to these losses either. Sure, people knew how to react — take to social media, share favorite songs and videos, maybe write something poignant — but the very act of mourning these artists never became easier. And the sour feeling that surfaced upon hearing of another death never went away. The map of grief kept being erased over and over again, its boundaries redrawn in unfamiliar ways.

One subsection of music fans — Rush aficionados — had a year's head start preparing for such goodbyes. That becomes crystal clear upon watching "Time Stand Still," a feature-length documentary about Rush that doubles as an instructive chronicle on how to navigate the loss of a favorite artist. Subtitled "The story of a band, its fans, and their 40 year relationship," the movie isn't about the death of a celebrity but focuses on the Canadian prog-rock trio's final lengthy run of concert dates, the R40 tour in 2015.

Along the way, the filmmakers interview all three band members (bassist-vocalist Geddy Lee, guitarist-vocalist Alex Lifeson and drummer Neil Peart) and profile several superfans — from Ray Wawrzyniak, who has an impressive, exhaustive room full of Rush memorabilia in his house, to Jillian Maryonovich, a graphic designer and the creative director of the Rush fan gatherings called RushCon.

"Time Stand Still" combines archival live footage of Rush (including scenes from the band's days as a scraggly group scrapping it out as an arena opener and touring in a rental car) with contemporary scenes from the R40 tour. Overall, however, the documentary doesn't try to cram in nuggets of band history, save for several amusing anecdotes about Rush's early tours with KISS. "Time Stand Still" instead explores the enduring relationships that helped the band amass such a vibrant career.

These bonds include the ones between Rush, management and crew (lead truck driver Arthur "Mac" McLear, for example, shares that he had held that position on tours since 1977) and between the three band members themselves. For example, at the final night of the R40 tour, Peart shocked Lee by coming out from behind his drum kit and taking a bow with the band.

"I call it the back line meridian; I stay behind my drums and cymbals [and have] for 40 years, never go out front," the drummer explains in the documentary. "Never. It's not my territory. And, meanwhile, I thought, 'Well, it would be really cool if I did, but I can't.' Eventually, l talked myself into it, but I wouldn't tell anybody because it was up to me to screw my courage to the sticking place, right, and go out and do it."

The push and pull required to even embark on the R40 tour is also retold in an amusing but pointed way in "Time Stand Still." In the film Peart is reluctant to head back on the road but acquiesces to doing more concerts after Lifeson mentions that his arthritis might make it difficult for him to tour going forward. The drummer only agrees, however, after a hotel-room bout with what he jokingly calls "the worst attack of Tourette's you have ever heard," which allows him to reconcile the prospect of more tour dates with the fact that his long-time friend wants one more round of doing something he loves.

By focusing on the bonds that kept Rush on the road (and the band together as a creative unit, even during times of separation or mild disagreement, "Time Stand Still" provides something tangible for fans to focus their mourning on. That doesn't make the band's ending any easier, but it does make the grief less abstract and easier to hone in on. And it's a technique applicable to dealing with musician deaths: By focusing first on healing from the severing of a relationship — and the loss of spontaneous surprises, such as Peart's tapping Lee on the shoulder — mourning's messy map at least has a starting point.

"Time Stand Still" presents an imperfect parallel to celebrity deaths, of course. Rush is simply retiring from the road; its members aren't necessarily giving up music or creating art. Plus, fans knew in advance that the R40 tour was likely going to be the end, so they could buy tickets for shows and say their own unique goodbyes. And from the very beginning of "Time Stand Still," the members of Rush aren't coy about the band's status; they speak in the past tense and wax philosophical about the idea of endings.

"The ending never feels like it's the right time to end, and for all the reasons that I'd like it to be over — which are almost exclusively physical things — in my heart and in my mind, I'm not ready," Lifeson says in the first few minutes of the documentary. "We haven't really known another life." Adds Peart, speaking right after him: "I don't think there is really an end. I have no fear of the future, no regret. It's a fantastic thing we've done, and I feel great I was able to sustain my prime for a long, long time and keep improving to the level I wanted to get to."

The documentary's impact isn't diminished by a viewer's knowing the narrative arc in advance. By the end of watching the film, I was growing teary along with all the fans in attendance at the final R40 show in Los Angeles. In fact, several of them were filmed visibly losing it as Rush ran through its breakthrough U.S. single, "Working Man," one last time.

It might seem like an overly dramatic reaction to become misty-eyed when a rock band finishes a show, even if this is reportedly the act's last concert ever. A retreat from the spotlight, however, is as transformative as a death, and fans have every right to feel bereft at the end of experiencing Rush's music in a certain way. Going forward, the fan-band relationship will be irrevocably transformed. It's perhaps less communal and more individual, for instance, and intimate rather than grandiose and immersive.

In a sense, that's how things are in the first place when someone starts loving a musician. "When Prince or Leonard Cohen or David Bowie dies, we mourn what they did to us when we first heard them, on a deep, cerebral level," Rogers wrote for The Quietus. "We mourn the second time we heard them, and then when we heard them again. We mourn the support that they gave us during fundamental emotional experiences in our everyday lives, and how their voices sang into our ears, and our ears alone — we allowed them to come in, and be ours."

"Time Stand Still" illuminates the deeply personal relationship between Rush fans and the band but also takes great pains to convey that such a connection is stronger than any ending. That's a lesson 2016 taught music fans, over and over again. But it's also how people move forward: holding those experiences tight and treasuring the joy, beauty and solace they have provided.