The "La La Land" backlash: Will it last until the Oscars? 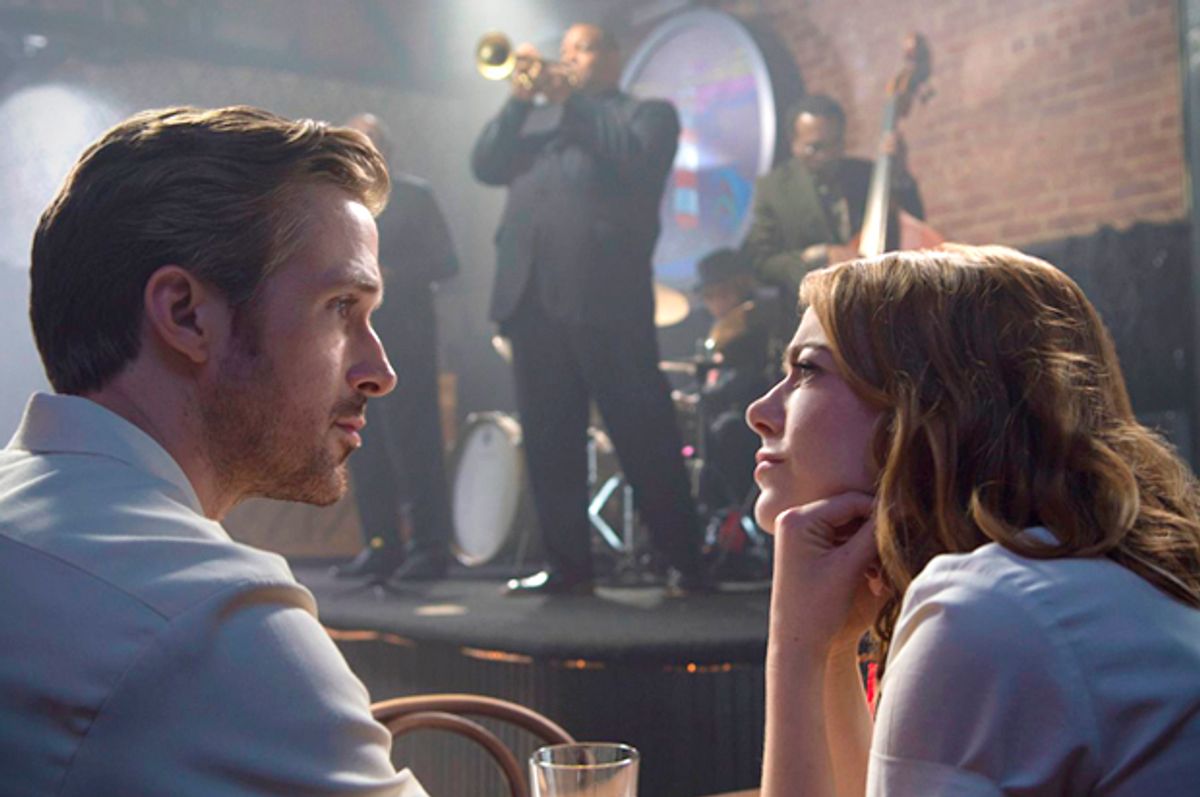 What happens when a scrappy little movie about two lonely dreamers who love solitude, dying art forms and (perhaps) each other becomes a heavily armed juggernaut prepared to crush all who stand in its way? Well, we’ll see how this plays out over the next few weeks.

That’s what appears to be happening with “La La Land,” the sort-of-musical, sort-of-movie-about-jazz, sort-of-underdog tale that has gone from being a low-budget indie with no superheroes or action figures (or even nudity or violence) to becoming the Best Picture favorite at next month’s Academy Awards.

Hollywood buzz around “La La Land,” which stars Emma Stone and Ryan Gosling, goes back to before the film itself, and it impressed people at the Venice Film Festival. It was reviewed enthusiastically around its December release, and word of mouth was strong, if not the ecstatic you’ve-got-to-see-this chorus that greeted “Moonlight” and “Manchester by the Sea.”

And “La La Land” was also an awkwardy titled movie with a petite $30 million budget — and one directed by a 30-ish kid from Rhode Island best known for a movie about a sadistic jazz teacher that only a few people saw and many of those disliked.

So why is it now very smart, very clever, very contrarian to jeer at or publicly dislike "La La Land"? Part of the reason, of course, was its record seven wins at last week’s Golden Globes.

And part of it is as simple as the strong reviews and buzz accumulating, along with some popular support, to lead to the usual backlash. (Oh, that’s too popular; it can’t be any good.) It’s less simple snobbery than the logic of the Internet: Any film or book or album getting near-universal praise becomes a magnet for a fresh “take” from online commentators or smart “rethinking” by serious critics and scholars. Imagine standing around a cocktail party and wanting to get noticed: Do you concur that yes, despite some flaws that this was mostly a very good, deeply felt film, or do you find a way to announce that this box-office hit marching toward an Oscar sweep is actually emotionally mawkish, a betrayal of the tradition of the musical, retrograde in its vision of jazz, shallowly nostalgic, and perhaps even deeply (if subtly) racist?

Of course, “La La Land” may be all (or none) of those things. But there is now an incentive for the boor at the soirée to pronounce that the movie has shallow characters, unexamined assumptions, the structure of a white-savior complex, unpersuasive singing, and whatever else will get him noticed.

This is certainly not the first time a film has come out of indie-land or nostalgic Francophile obscurity (Chazelle’s family is French Canadian) to become the biggest movie in the world (the black-and-white silent movie “The Artist” moved along a similar groove a few years ago).

But the sweep at the Globes — increasingly, as goofy and drunken as it can be, a harbinger for the Oscars — puts “La La Land” in its own category. The awards, the film’s reviews, its working in (or around) a cinematic tradition (the Hollywood musical) that has a kind of New Model Army around it, its racial dynamic (the Caucasian lead character loves old jazz and geeks out to Thelonious Monk played on vinyl) all work together to put a large target on the film’s back.

The saddest thing about all of this is that now — post-Globes, post-hype — no one will be able to go to this movie and really see it. It has become like the barn in Don DeLillo’s novel “White Noise.” DeLillo’s rustic farmhouse, announced on a sign as "The Most Photographed Barn in America," becomes — thanks to tour buses and mobs of people and countless cameras — impossible to see. With all the clicking shutters, you can’t even hear yourself think when you stand near it. It exists in plain sight, near the apple orchards and white fences, but it has simply disappeared.

Is “La La Land” any good? Is it racially or musically or emotionally patronizing? Will it hit as hard at the Oscars as it did at the Globes?

Difficult to say. What is becoming clear is that many think pieces, reconsiderations, bitter Tweets and smart-person denunciations will appear between now and then. If you go to the kind of parties where educated people talk about culture, you can be pretty sure what you’re gonna hear.