The new American exceptionalism: How the Russian connection to the 2016 election signals the destruction of our nation’s ideals

Our nation has a long history of fighting over what American exceptionalism means. It's about to get even uglier 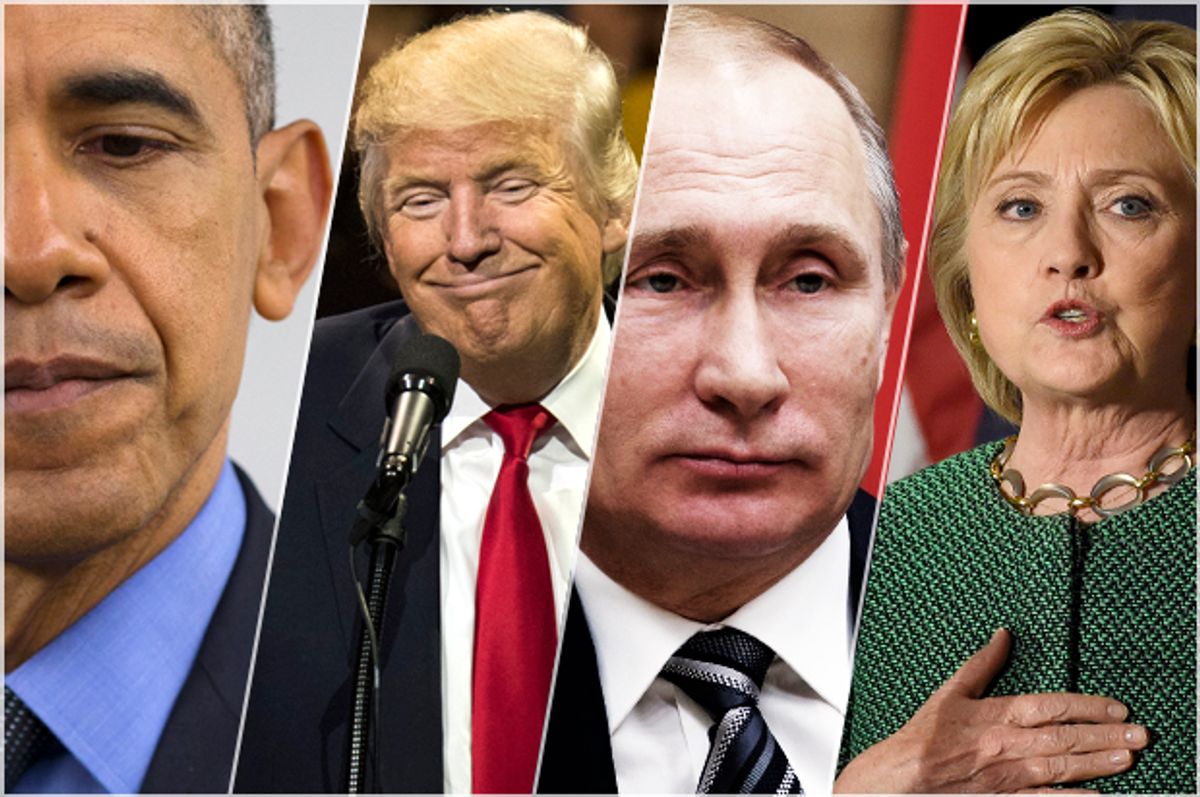 Amid a new slate of disturbing and unsubstantiated reports about the connections between President-elect Donald Trump and Russia it is easy to become distracted by lurid allegations about hotel rooms and possible blackmail. And yet, concerns over whether Trump was or wasn’t briefed, was or wasn’t colluding with the Russians are only a symptom of a larger problem. At the heart of the story are serious questions about what U.S. state power and American ideals will look like in the wake of the 2016 election.

It is not the questions about Russian interference in our election that signal a new threat to our state; it is the U.S. response to these reports that should cause us to worry. Perhaps even more troubling, both the pro-Trump and the pro-Hillary Clinton responses signal new and disturbing directions for how we understand the role of our nation in the world order.

The Trump camp’s dismissal of the reports is a sign of a neoliberal corporate mentality that simply can’t grasp the value of notions like sovereignty, democracy and election integrity. Trump’s profit-driven vision ignores the idea of a citizen or the benefit of a civic community, but more important he can’t appreciate the geopolitical realities of allies and security threats.

He brings the perspective of a global capitalist to the White House, not a state leader of a global power — and that distinction has critical effects on how he understands what makes America great. His CEO mentality, thin skin and narcissistic personality turn issues of national security into petulant rants and personal vendettas. He is more interested in attacking his detractors on the left and in the media than in defending our nation from outside interference.

On the other side of the political fence, the response to the allegations of Russian interference are not much more encouraging. Pro-Clinton supporters freak out over the possible role of Russia in our election but show no awareness of the fact that the United States has done far worse meddling in the elections of many other states.

The deep hypocrisy of these responses signals a uniquely American hubris. Dov Levin, a professor at Carnegie Mellon University, has documented more than 80 times that the United States has tried to influence the outcome of another country's election — and that is only from 1946 to 2000.

The irony of the U.S. outrage over the Russia hack was captured brilliantly in one tweet:

As Marc Trachtenberg explained on Yahoo, the outrage over the supposed Russian hacks evinces a widespread double standard: “Since 1945, America has intervened in the internal political affairs of other countries as a matter of course. Our basic attitude has been that free elections are great — as long as they don’t produce outcomes the U.S. government doesn’t like.”

Trachtenberg explained that some examples of countries where this has occurred are well known — Indochina, Congo, Chile, the Dominican Republic — but others like Guyana are less so. He also reminded us that “the United States felt free to intervene, sometimes massively, in the internal political affairs of our democratic allies.”

Even more ironic, many of these interventions took place while Hillary Clinton was secretary of state.  And despite our penchant for historical amnesia, we need to remember that the 2013 Edward Snowden leaks revealed widespread National Security Agency surveillance programs both within and beyond our country’s borders.

But there’s more. As news continued to break of the extent of Russia’s cyberattacks aimed at political institutions across the West, there was another side of the story — that of the U.S. doing the exact same thing on a far greater scale.  As Hugh Eakin wrote for The New York Review of Books: “Far less noted, however, has been the extent to which the US itself has coordinated with Sweden and other allies to develop hacking and surveillance tools that are far more advanced than the e-mail ‘phishing’ strategies used in the recent Russian attacks. A major target of this technology is Russia itself.”

To make matters worse, the Clinton camp has yet to seriously address the fact that the recent leaks revealed a shady underbelly to her campaign that left many disgusted. The Clinton camp’s response to the claims that Russia interfered in the 2016 election highlights a deep hypocrisy, an aggressive unilateralism and a complete disregard of our own history.

The 2016 election may well have put our democracy on dangerously thin ice, but it has also revealed a new version of American exceptionalism, one that promises to unravel the best of our nation’s ideals.

Our nation has a long history of fighting over what the concept of American exceptionalism means. In his book "The New American Exceptionalism," Donald Pease, a Dartmouth College professor of American studies, has argued that one critical turning point came during the Cold War when the United States had to redefine what made it exceptional.

Pease said that one of the keys to understanding Cold War exceptionalism is the fact that the ongoing state of fear caused by the U.S.-Soviet dynamic and the national security state transformed the myth of America. The odd irony is that the Cold War ushered in an era when many of the ideals of America were limited so as to protect the very notion of them. Free speech was curtailed in order to protect the idea of free speech, just as the defense of American freedoms led to their greater regulation and control.

Pease explained that another key turning point was the feud between former president Bill Clinton and former House speaker Newt Gingrich, who each argued that they offered the true, definitive version of American exceptionalism. The defining characteristic of that moment is the division of the U.S. into two social constituencies whose ideas of America were radically opposed and mutually unrecognizable. It was during this period that the right-wingers began to viciously claim that they and they alone knew what it meant to be American.

The events of 9/11 and the George W. Bush presidency combined the fear-based exceptionalism of the Cold War with the deep partisanship of the Clinton-Gingrich era. By then anyone who didn’t agree with the Bush-era exceptionalism was characterized as a traitor to the nation.

President Barack Obama tried to reverse those trends, offering a new version of American exceptionalism, one that was not grounded in hubris, historical amnesia or a notion of national superiority. Obama attempted to counter the jingoism of the Gingrich and Bush years by emphasizing the exceptional nature of a nation that is always striving to be more democratic and more true to its ideals.

The right responded to Obama’s idealistic and pragmatic vision by accusing him of hating his country.

Obama was repeatedly questioned about his belief in America’s greatness. And he continued to try to adapt the idea of exceptionalism to a more tempered, nuanced, less unilateral view. In a 2009 interview he explained, “I believe in American exceptionalism, just as I suspect that the Brits believe in British exceptionalism and the Greeks believe in Greek exceptionalism. And so I see no contradiction between believing that America has a continued extraordinary role in leading the world towards peace and prosperity and recognizing that that leadership is incumbent, depends on, our ability to create partnerships because we can’t solve these problems alone.”

He was later attacked by the right for daring to compare U.S. exceptionalism to the national pride of other nations.

He also explained his view of American exceptionalism in a global context: “Rivals like Russia or China cannot match our influence around the world — unless we give up what we stand for, and turn ourselves into just another big country that bullies smaller neighbors.” That, of course, is exactly what both the Clinton and Trump camps have been up to — each in its own way.

While we can and should debate whether Obama’s rhetoric matched the realities of his administrations, the more pressing concern is whether his idealistic, pragmatic and visionary version of American exceptionalism is a thing of the past.

Between the hawkish hypocrisies of the Clinton camp and the neoliberal hubris of Trumpland, we may be witnessing an era when many of the ideals that once defined our nation wither away.

We might still be learning about the exact details of the Russian role in the election, but one thing is clear: The Russians managed to expose a new bipartisan trend in our national identity, one that threatens our founding ideals. And that’s why the hacking of our nation that we should be worrying about is not coming from Russia; it’s coming from our very own political leaders themselves.