From startling insight to random insult: A guide to the uses and misuses of "fake news"

A term that barely existed before last fall, meant to describe deliberate lies, has itself become an obfuscation 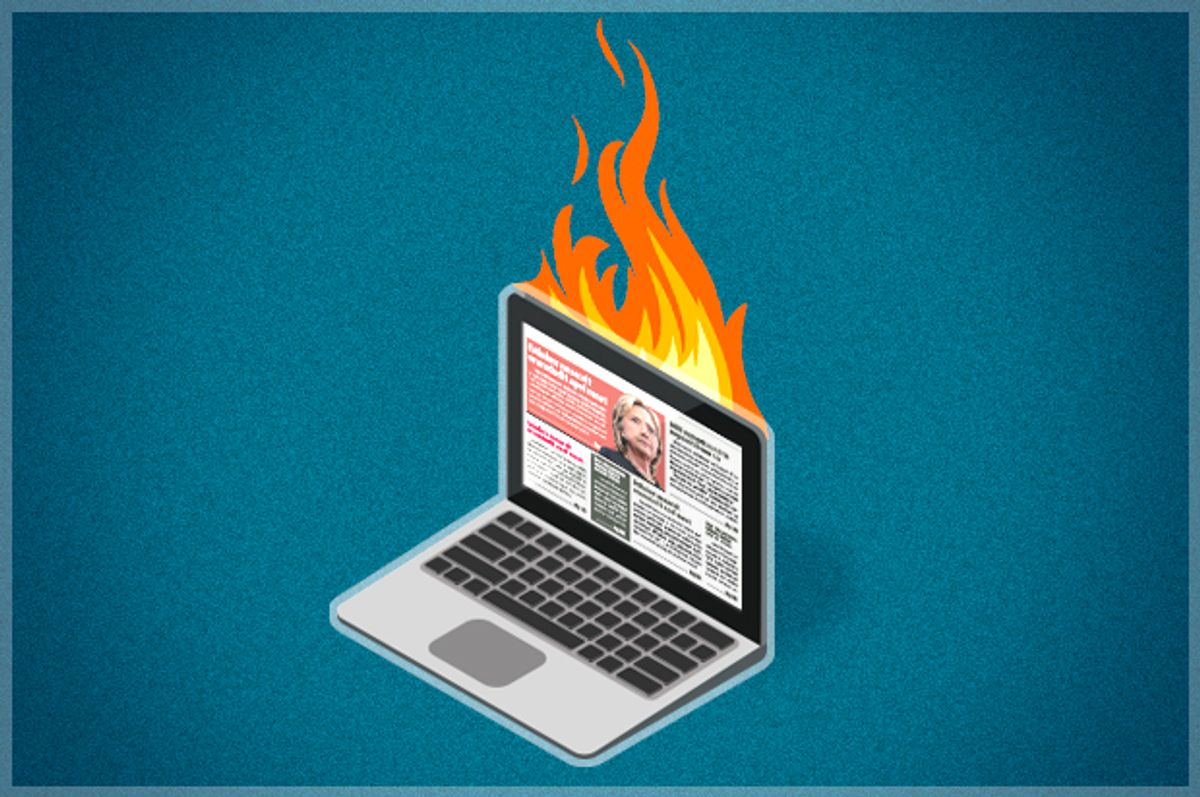 "Fake news" has become a ubiquitous buzzword among pundits, politicians, news media and bloggers. A Google Trends search finds that the term was virtually unknown until late October, just before the presidential election, at which point it underwent a sudden and significant spike. Stories like those about Hillary Clinton running a child sex ring from a Washington pizzeria, or about Democrats wanting to impose Sharia law in Florida were widely shared among conservatives. Reports also continued to suggest that Russia ran a disinformation campaign to get Donald Trump elected, a claim that Trump stubbornly rejected until his first press conference.

There is, indeed, good reason for Oxford Dictionaries choosing “post-truth” as word of the year, defining the term as “relating to or denoting circumstances in which objective facts are less influential in shaping public opinion than appeals to emotion and personal belief.”

Now, in Orwellian fashion, the term “fake news” itself is being stretched and deformed into its semantic opposite. Consider that on Jan. 11, Fox News ran the front-page headline: “Fake News? Trump blasts Russia dossier report …” after a press conference in which Trump explicitly dismissed a CNN reporter by saying “You are fake news!” A day earlier, Breitbart posted an article titled “Fake News: Gizmodo Falsely Claims Trump Sacked Heads of Agency That Maintains Nuclear Weapons,” and the New York Post published a piece the same day called “Buzzfeed’s Trump report takes ‘fake news’ to a new level.”

For the sake of intellectual clarity — that is, to disentangle this knot of obfuscation — let’s take a moment to consider what fake news really is.

Take the “pizzagate” conspiracy theory. This started when 4Chan users noticed that John Podesta had exchanged emails with the owner of Comet Ping Pong, a Washington pizzeria, and concluded that they were using the word “pizza” as a cryptic code word for pedophile sexual activities.” (Seriously.) A white supremacist then tweeted the following: “Rumors stirring in the NYPD that Huma’s emails point to a pedophila [sic] ring and @HillaryClinton is at the center. #GoHillary #PodestaEmails23.” From there, numerous right-wing websites picked up the story and presented it as reliable information. One man from North Carolina became so convinced that the story was true that he drove to the pizza shop with an AR-15-style gun to “self-investigate” the story.

Or take the assertion that Florida Democrats voted to impose Sharia law on women. This false headline originated on “a blogging platform for conservative, libertarian, free market and pro-family writers” called Western Journalism. As the post’s author put it, “Anyone who isn’t certain that Democrats are devoted to destroying America need only take a look at their despicable conduct in the Florida Senate. In a vote that never should have had to be taken, every single Democrat voted to force Sharia law on the people of Florida. By doing so, they placed women and children in very real danger. The vote was 24 votes for America and 14 votes for al-Qaida and the Taliban cast by loathsome Democrats.” Once again, this turned out to be demonstrably false: it confuses, and then exaggerates, a law that enables judges “to apply foreign law as long as it doesn’t contradict public policy in the U.S.”

These are unambiguous instances of dishonesty and foolishness, not unlike some of the central claims made by Trump and his supporters, including that Barack Obama was born in Kenya, that the 2016 presidential election was going to be “rigged,” that millions of "illegals" voted for Clinton, that U.S. intelligence agencies are wrong about Russian hacking and that Obama is “literally” the founder of ISIS — to cite only a few egregious mendacities.

But what about Gizmodo and BuzzFeed? Do charges that they propagated “fake news” hold any weight? Taking these in turn: Gizmodo recently published an article that reported,

According to an official within the Department of Energy, this past Friday, the President-elect’s team instructed the head of the National Nuclear Security Administration and his deputy to clean out their desks when Trump takes office on January 20th.

This report even made it onto "The Late Show with Stephen Colbert" as a source of anxious laughter.

Another NNSA official, speaking on background to Gizmodo and Defense News, has disputed this report as "inaccurate" while confirming that "there have been no discussions between the president-elect’s transition team and any of NNSA’s political appointees on extending their public service past Jan. 20.”

Gizmodo further clarified: “In other words, the Trump transition team has not asked the top two NNSA officials to stay on until they can be replaced.”

Does this constitute fake news, as Breitbart asserts? I would strongly urge an answer in the negative. Here’s why: It constitutes bad journalism, and bad journalism should be called out as always unacceptable. But the folks at Gizmodo also displayed a degree of intellectual honesty: They made a mistake and then posted a correction.

Global land temperatures have plummeted by one degree Celsius since the middle of this year — the biggest and steepest fall on record. … But the news has been greeted with an eerie silence by the world’s alarmist community. You’d almost imagine that when temperatures shoot up it’s catastrophic climate change which requires dramatic headlines across the mainstream media and demands for urgent action.

This is a wildly inaccurate account of what’s really going on — so inaccurate, in fact, that the Weather Channel published a frustrated response titled “Note to Breitbart: Earth Is Not Cooling, Climate Change Is Real and Please Stop Using Our Video to Mislead Americans.” According to this article, which cites actual experts who understand actual science, Delingpole’s argument is “a prime example of cherry picking, or pulling a single item out of context to build a misleading case.” So how did Breitbart react to this opprobrium? Did its editors add a correction to the article like Gizmodo? Did they apologize for reinforcing false beliefs widely held by their largely uneducated audience? No. As of this writing, the article remains undisturbed in its original form.

As for BuzzFeed, a now famous post from Jan. 10 went viral because it links to a dossier claiming that Russia has “compromising information” about Trump. There are two reasons such information could be important: First, it would further confirm that the Kremlin wanted Trump in the Oval Office, and second, it suggests that Russia could manipulate Trump through the mechanism of blackmail.

Why did BuzzFeed release this dossier? In short, because John McCain — who Trump once said isn’t a war hero — gave this information to the FBI. This led to a report by CNN that both Obama and Trump had received the information, some of which had been “circulating as far back as last summer.” Once the CNN report went live, the door was opened for other media to take the extra step and make the entire dossier so readers could, in BuzzFeed’s words, “make up their own minds.”

Once again we can ask: Is this an instance of fake news, as the New York Post claims? And again the answer is a resounding “No!” Consider the subtitle of BuzzFeed’s article, which explicitly states that “The allegations are unverified, and the report contains errors.” The article itself states that the dossier “includes specific, unverified, and potentially unverifiable allegations of contact between Trump aides and Russian operatives, and graphic claims of sexual acts documented by the Russians,” and that it “was prepared for political opponents of Trump.”

Such caveats — made multiple times throughout the article — are symptoms of intellectual honesty, not fake news trickery. BuzzFeed is clear that the information in the dossier is unproven, and may not be true. The point of the article was to make known that such material is circulating at the very highest levels of government (which CNN did as well), and then to provide the dossier for readers to see for themselves.

People are free to make their own judgments about the ethics of BuzzFeed's decision. (Salon, for instance, chose not to publish the contents of the dossier or to recycle its allegations except as they affected the political news cycle.) This dissemination of potentially explosive information into the public sphere is not even close to Breitbart reporting that climate change isn’t real, that Clinton was running a child sex ring, or that Democrats in Florida attempted to implement Sharia law. Lumping all of these under the category of “fake news” is completely disingenuous.

I strongly recommend that people think hard about the epistemological underpinnings of the term “fake news.” Fake news is not merely reporting a falsehood. Even the most honest and highly skilled journalists are susceptible to mistakes, because all humans are fallible. Rather, fake news is reporting a distortion of the truth either for ideological or commercial reasons, accompanied by total carelessness and/or a dogmatic refusal to acknowledge one’s mistakes once revealed as such. The fact that Gizmodo failed to double-check its reporting makes me trust the site a bit less, but the fact that it published a correction makes me trust the site a bit more. The fact that Breitbart, Fox News and other right-wing media outlets consistently refuse to admit when they distort the evidence, fudge the facts and disregard expertise gives me almost no confidence in anything they publish. And the same should apply to you.

How do we fix this multilayered mess of fake news and Orwellian doublespeak? The answer is that those of us who value truth must heed Glenn Greenwald’s exhortation to be extra-careful when it comes to our beliefs, the articles we share with others and the memes that we spread around social media. To date, seven academic studies have shown that Fox News viewers are the most misinformed audience in America. It is progressives rather than conservatives who have the intellectual and moral high ground. Moving forward, we need to ensure that intellectual integrity continues to be a value of paramount importance. If we do this, we might just be able to counteract the Zeitgeist of radical anti-intellectualism that has seemingly swept across the nation's media landscape.