What is to be done? How Democrats can rebuild and recover from the debacle of 2016

Abandoning core principles and refusing to fight is exactly the wrong lesson. There's hope! But it will take work 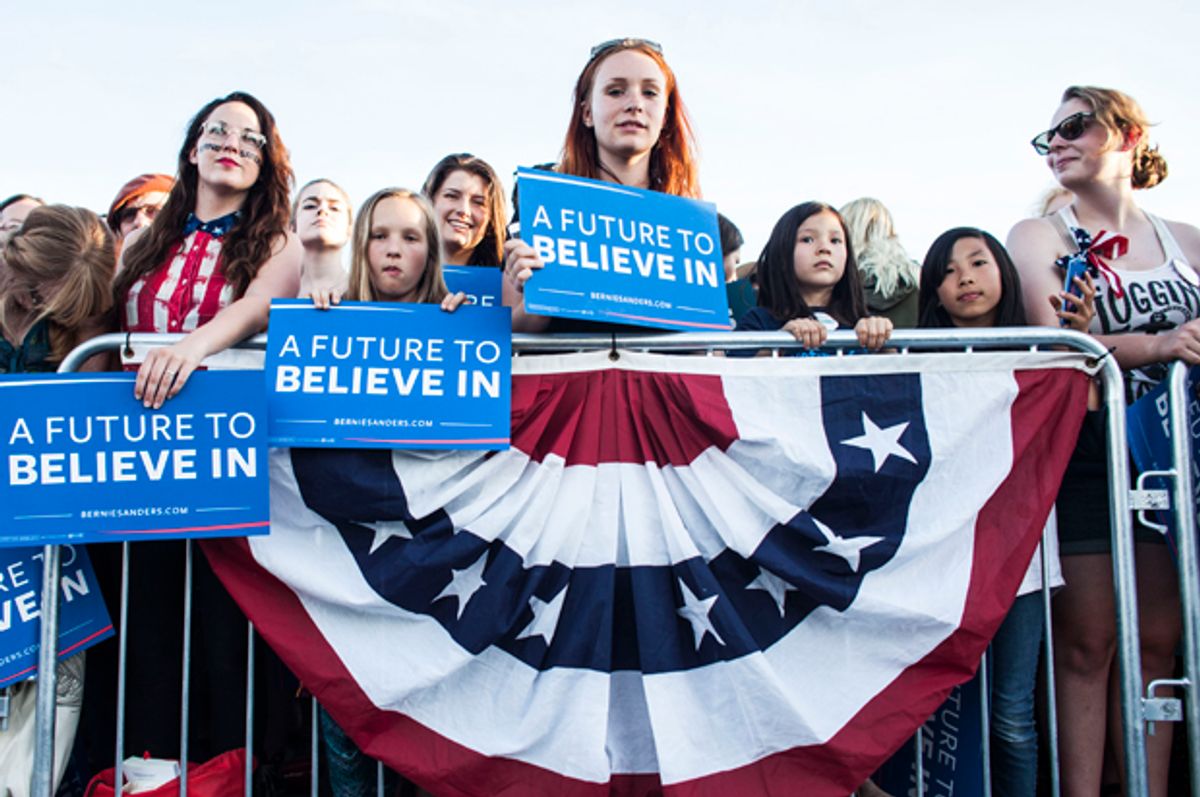 Last week I explored the three core failings of the Democratic party during the Obama era: a preference for perception over power, a desire for unrequited bipartisanship and a focus on the presidency over crucial state and local battles. Since Donald Trump’s election, Democrats have seemed keen to put some of these tendencies behind them, and many progressive leaders have promised to “resist” Trumpism. But what exactly this means is still nebulous -- and though tweets are great, they don’t change policy. There are several useful lessons Democrats could learn from the past.

Not All Right-Wing Tactics are Useful

There is a temptation for Democrats to draw lessons from reactionary political movements. In the wake of 2016, there have been numerous calls for a “Breitbart of the Left” or a “Tea Party of the Left.” Prominent thinkers to the left of center have called for the Democratic Party to abandon a commitment to racial justice to win voters. One prominent pundit has called for Democrats to adopt voter suppression as a tactic, and a Democratic senator (Joe Manchin of West Virginia) recently tried to shut down the government. Others have callously mocked people who might lose health insurance under Trump.

A “Tea Party of the Left” is a useful elevator pitch, but it’s important to distinguish which parts of the Tea Party are useful (independent grassroots power), which aren’t (escalatory tactics like government shutdowns; white racial solidarity) and which simply can’t be replicated (infusions of billionaire money). Many right-wing tactics and messages are inherently reactionary and cannot propel a progressive movement. While Democrats can study the right, they would also be wise to study the Moral Mondays movement in North Carolina, which offers important lessons for resisting Trump.

Every time they lose an election, Democrats feel they must sacrifice one of their constituencies to the centrist god whom they have failed. Will the centrist god be satisfied if Democrats sacrifice trans folks and Black Lives Matter, or must the interests of single women be abandoned as well? It’s not entirely clear that Democrats need to make many of these concessions. For instance, the current Republican position on abortion is radical, and is opposed by a vast majority of Americans, even many who lean Republican. Pat McCrory, one of the most prominent anti-trans Republicans, lost re-election in a state where other Republicans on the ballot won.

It’s also not clear that abandoning progressive priorities will inevitably win elections. For instance, the same state that elected conservative Democrats like Manchin and Gov. Jim Justice also sent Jay Rockefeller to the Senate for two decades, during which time he fought for a public option in the healthcare law and co-authored the Children’s Health Insurance Program law. In 2014, Democrats who ran on progressive policy platforms fared better than those who abandoned them.

Republicans who are successful in blue states often moderate on culture-war issues, but tend to stick to the Republican playbook on fiscal issues. The state-level Republican Party has also managed to create clear differentiations from the national party, branding its candidates in the Northeast mostly as fiscally minded technocrats. Democrats have struggled to replicate the strategy, mainly because the party apparatus has simply ceased to exist in many states and hasn’t run candidates, so they lack any local authenticity. Instead, Democratic candidates (if they run at all) look like Republicans, making it harder for groups that are centered around intersectionality to mobilize in support of them.

You Lose 100 Percent of the Battles You Don’t Fight

Far too often over the past eight years, the Democratic Party has run either comically unqualified candidates or no candidate at all in important (and sometimes winnable) elections. One reason why it’s difficult to know how Democrats can win elections is because in many states they’re not even trying. The party’s failure to run viable candidates in crucial elections, mostly in the South, creates several problems. First, it is a slap in the face of the black and working-class voters who form the backbone of their coalition and cannot even vote for Democrats for key positions in their states. Second, it hurts the ability of Democrats to pick up seats down-ballot. For instance, during the 2014 midterms in Nevada, the lack of a strong Democratic gubernatorial candidate (“None of These Candidates” won the Democratic primary, so the second-place candidate was chosen) contributed to a “down-ballot drubbing,” according to analyst Kyle Kondik.

Third, Democratic weakness down-ballot enables Republican extremism, because voters have no way to reject the GOP. It also means that in the case of a Republican scandal, an unpopular governor or another unforeseen event, Democrats cannot capitalize. It’s often difficult to tell a year or two out which incumbents will be weak. Republicans have been able to win gubernatorial victories in deep blue states like Vermont, Maryland and Massachusetts. Fourth, it means that state-level Democrats can’t create a coherent brand, which demobilizes potential supporters.

Finally, and most important, this shuts Democrats out of power in states where they have the most potential to improve people’s lives. A Democratic governor in a state that has not expanded Medicaid could almost instantly improve the lives of hundreds of thousands of people, as John Bel Edwards did in Louisiana. One problem is that Democrats perceive winnable races as impossible uphill slogs -- for instance, Gov. Larry Hogan of Maryland is seen in many Democratic circles as a politician who “can’t be beat,” even in a state Hillary Clinton won by 26 points. Democrats have failed to meaningfully contest far too many elections, to their long-term detriment.

One of the results of the Democratic obsession with the presidency is that the party has lost any vision for the possibilities of policy at the state and local level. As Republicans have shown, there’s an immense amount of policy that can be implemented at the state level. Under Trump, Democrats should begin creating successful state models, so that the residents of, say, Kansas can see the different policy choices they could enjoy.

The benefits of these policies would be immense. California, the world’s sixth-largest economy, has a Democratic governor and Democratic super-majorities in both chambers. In New York, Democrats control the assembly and the governorship, though the state senate is in Republican control because a group of moderate Democrats has allied with Republicans. (It’s a long story.) Though Democrats control depressingly few states and cities, these states and cities house a large share of the nation’s population and economic activity.

California has already implemented the most progressive environmental policy in the country (though New York has the potential to surpass it). But there is more to be done. California could pioneer a Universal Basic Wealth program, in the form of a baby bond, which could help eliminate the racial wealth gap. California could lead the way on mass decarceration, immigrant protection, green energy, universal healthcare and affordable housing. Democrats need a defined policy blueprint at the state level, which could help them build long-term power and benefit their constituencies.

They Have the Money; Get the People

Having worked in progressive spaces nearly all of my adult life, I’ve heard the phrase, “they’ve got the money, we’ve got the people,” or some variant thereof, hundreds of times. To some extent that is true: A far larger proportion of Americans identify as Democrats than as Republicans, and after 2016 Democrats have won the popular vote in six of the last seven elections. They have consistently fallen victim, however, to structures in American politics that are designed to prevent a multiracial working-class coalition from wielding power.

That phrase wrongly implies, however, that Democrats are also more organized. The reality, as extensive research by political scientists Theda Skocpol and Alex Hertel-Fernandez has shown, is the opposite. The Koch brothers have created a state-level network so extensive, organized and well-funded that it rivals the two major political parties. During the past eight years, state-level Democrats have been deprived of resources. Traditional bases of progressive organizing like unions and community organizations have been demolished by the right while the Democratic Party has looked on in disdain or actively aided in their destruction. Since 2012, five states have adopted right-to-work laws, and a newly conservative Supreme Court could crush public-sector unions.

At the same time, Republicans have pioneered new grassroots organizing movements like the Tea Party (while Democrats have muzzled theirs) and used primary challenges to keep Republicans in line. About half of all eligible Americans don’t vote in presidential elections, and a majority don’t vote in midterms. Among young people, working-class people and people of color, voting rates are even lower. As my research has shown, these nonvoters are younger, less wealthy and more diverse than the voting population. Democrats should prioritize a combination of automatic voter registration, same-day registration and early voting, which could ease mobilization.

Democrats can’t fall into despair, but they also cannot afford too much optimism. For too long, Democrats have taken victory for granted as an inevitable product of demographic change coupled with Republican obstructionism and unpopularity. Many have advanced a hydraulic theory of American politics, in which Democrats will inevitably bounce back following Republican gains. But voter suppression, gerrymandering, the increasing influence of money in politics, the Democratic Party’s dwindling talent pool and a difficult electoral map could in fact leave Democrats in the wilderness for a long time.

But if Democrats can wise up, they have the potential to lay the groundwork for a progressive future. The arc of history may bend toward justice, but it does not bend without force. Progress is not inevitable. The fact that our first black president is being succeeded by a man who would have refused to rent him an apartment is a testament to that.