Art imitates life: Can't bear to watch the Inauguration? Check out these political dystopian films instead

The dark and cynical "A Face in the Crowd" won't make you feel better about politics, but at least it's fiction 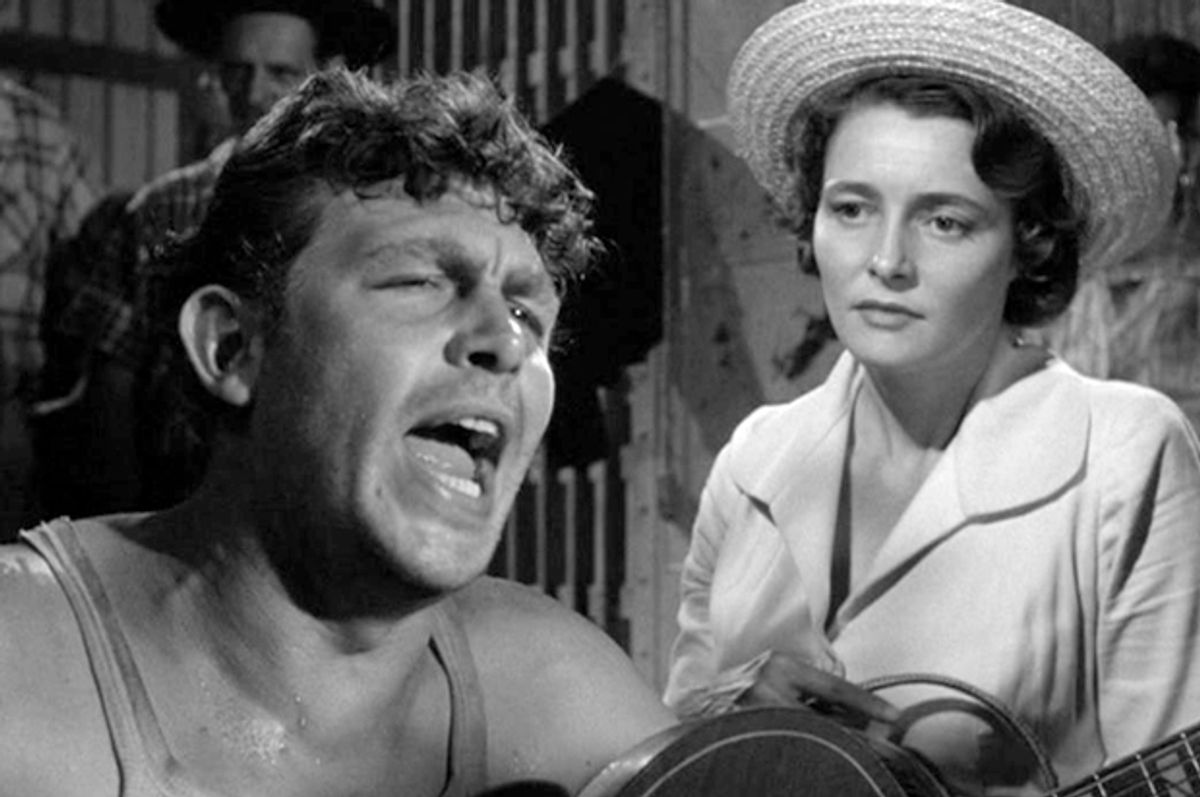 During inauguration weekend, the Anthology Film Archives in New York City is featuring a timely, cogent (and bitter) film series entitled “Inauguration of the Displeasure Dome: Coping with the Election.”

Jed Rapfogel, who co-programmed the film with his colleagues, said that the series came together quickly, “It was something we did out of necessity. When Trump won, we had to mark that weekend. The films reflect the sense that a dystopic, alternate reality has come to pass.”

There are numerous films that could have been screened, but the selection of “A Face in the Crowd,” “It Happened Here,” and “Punishment Park,” as well as Robert Kramer’s “Ice,” Stan Brakhage shorts, and other titles provides AFA the opportunity to present “radical, progressive, politically-engaged films” that reflect on the current political climate.

“A Face in the Crowd,” Rapfogel noted, “came first to mind because of how its hero, Lonesome Rhodes (Andy Griffith), is a celebrity and a demagogue who rises to political power. It is relevant in so many ways.”

He continued, “‘Face’ as well as the other films in the series are going to look different now, coming at a time when we don’t have that benefit of thinking of it as dystopic. The perspective has changed, and these films are all interesting and useful in some way: How do we deal with this situation?”

For those not able to get to Anthology Film Archives, the titles reviewed below are available on DVD and/or online. Folks not wanting to watch Trump’s inauguration are urged to check out these essential classics instead.

“A Face in the Crowd”

Elia Kazan’s electrifying 1957 film, written by Budd Schulberg (who adapted his own story), is about a “gentleman loafer” (hobo) named Lonesome Rhodes (Andy Griffith, in his debut) who becomes a media sensation when his grassroots wisdom connects with the common people. He can say anything to sway the listeners of his radio and TV shows — and he sure does. Marcia Jeffries (Patricia Neal) is a radio host who discovers Lonesome in an Arkansas jail. She follows him from local radio to a TV gig in Memphis and ultimately a national program in New York. Lonesome raises ad revenues and gets high ratings because he is able to guide the masses with a strong hand. However, marketer Macey (Paul McGrath) is fearful of Lonesome using TV to persuade the general public and calls the media sensation “a risk, uncooperative and unpredictable.” [Sound familiar?]

It is no surprise that Lonesome doesn’t care who he walks over as his success grows. He wants love, not respect, and soon finds work as a political consultant for a right-wing presidential candidate. TV writer Mel Miller (Walter Matthau) sees through Lonesome, observing, “He’s got the courage of his ignorance,” a fact that Lonesome proves when he sounds off in a hotel room to Marcia, “This whole country’s just like my flock of sheep! . . . Rednecks, crackers, hillbillies, hausfraus, shut-ins, pea-pickers . . . I own ’em! They think like I do. Only they’re even more stupid that I am, so I gotta think for ’em . . . I’m gonna be the power behind the president . . .” Marcia’s expression can only be described as terrified at hearing his abuse of the public confidence.

“A Face in the Crowd” is dark and cynical, and the acting is as superb as the script. When Mel says at the end of the film, “We got wise to him, that’s our strength” it is a rallying cry for those who can’t endorse a Trumpian world.

This remarkable film, made in 1965 by Kevin Brownlow and Andrew Mollo, eerily feels like a documentary, it seems so real. The filmmakers came up with the idea — a “fantasy” imagining a Nazi-occupied Britain in 1944 — when they were teenagers, eventually shooting it eight years later on film stock donated by Stanley Kubrick.

The film’s heroine is Pauline (Pauline Murray), an Irish nurse who is evacuated from the British countryside and sent to London where Nazi propaganda posters line the Thames. She decides to join the Party to be helpful by working as a nurse, only to be told by a clerk, “We don’t accept your decisions. You accept ours.” While Pauline observes that the Party has a “faintly military flavor,” National Socialism offers a new way of life, one that is “backed by the people of Britain” to outlaw Bolshevism, establish a corporate state, help solve the “Jewish problem,” and conquer unemployment with a labor front. A highly disturbing sequence in the film — one that was censored by the studio — involves Pauline participating in a discussion that claims “Jews are parasites” and they will be sent to Madagascar.

As Pauline slowly awakens to the perils of the Party, “It Happened Here” gets more intense and more alarming. A pivotal scene has Pauline meeting her friend Dr. Richard Fletcher (Sebastian Shaw), who berates her for being a Party member. She admits to being ignorant, stating, “I know as much about politics as a lamppost.” Pauline’s innocence and her desire for “law and order” contrast with Richard and his wife’s struggle for freedom, which include harboring a partisan in their apartment. Pauline may believe that resistance is futile, and she calls Richard’s activism out as a response to his guilt for doing nothing before then.

Yet Richard chides Pauline in the film’s most quotable (and prescient) line, “The appalling thing about fascism is that you’ve got to use fascist methods to get rid of it.”

The last act of “It Happened Here” gets even more frightening as it presents a funeral that looks like a Klan rally, and an extended sequence set in a medical hospital that is revealed to be performing “cleansing” operations.

The fantasy of “It Happened Here” is scarily Trumpian; this forceful drama will still cause viewers to bristle more than 50 years after it was made.

This is Peter Watkins’ gripping (and grim) 1971 pseudo-documentary film in which the McCarran Act is invoked. The Act — which was enacted in 1950 over President Truman’s veto, and in force until the early 1970s — enables the president to declare an “internal security emergency” and “apprehend and detain persons who may cause sabotage.” In the film, groups of subversives — draft-dodgers, conscientious objectors, black militants, feminists and the like — have been apprehended and detained. They are sentenced at a tribunal where they are given two options: years in a federal penitentiary or days in “Punishment Park.”

However, Punishment Park may be worse than jail. As one fatalistic female prisoner states quite bluntly, “It’s win or die.” The park is a section of the Bear Mountain National Park in Southern California, where the criminals must walk 53 miles in the 90+ degree desert without water for three days to a designated location marked by an American flag. They must also evade capture by the police and national guardsman on call to keep the prisoners in line. If the prisoners fail to complete the course, they must serve out their sentence in federal prison, unless they die (or are killed) first.

A documentary film crew (led by Watkins) follows the prisoners’ efforts, and also captures scenes of the law enforcement officers conducting target practice as well as the heated exchanges at the various tribunals.

In the intense, exciting courtroom scenes, non-professional actors improvise their roles as defendants. They complain about being detained for months without knowing why, are denied a “jury of their peers,” and are argumentative and combative in ways that will make every liberal viewer proud. They testify against the violence in society, the repressiveness of the government, and the immorality of war (the film makes connections to the Vietnam War and Nixon). They champion ideas of freedom, uphold moral values, and emphasize the importance of thinking for themselves. These “disruptive outbursts” are the most stirring in the film.

Watkins shrewdly intercuts the three storylines for maximum impact. A defendant’s tribunal speech about violence is juxtaposed with the military’s gun lessons, and scenes of brutality experienced by the prisoners who are running for their lives. The film may feel almost too on the nose with its messaging, but “Punishment Park” was a timely response to Kent State, the Chicago 10 Conspiracy Trial and other real-life events. That said, when a radio announcer recounts a senator resigning his position because “he refused to participate in dismantling basic freedoms and repressive legislation” (e.g., immigration reforms, stop-and-frisk measures, etc.), it’s eerily prescient of contemporary politics. How is that for art imitating life?