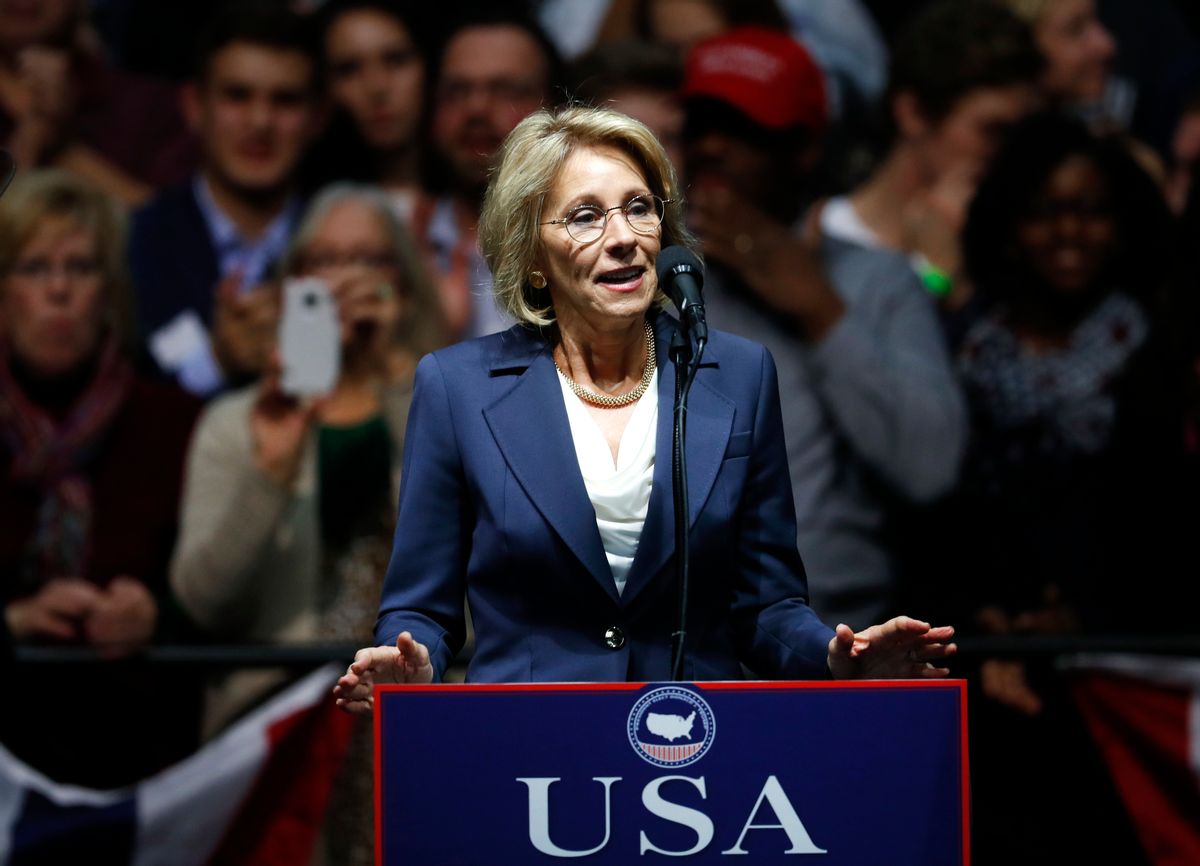 WASHINGTON — Charter school advocate Betsy DeVos is widely expected to push for expanding school choice programs if confirmed as education secretary, prompting pushback from teachers unions. But Democrats and activists also are raising concerns about how her conservative Christian beliefs and advocacy for family values might impact minority and LGBT students.

The wealthy Republican donor's financial and political clout will be on display on Tuesday as she goes before the Senate Health, Education, Labor and Pensions Committee, which has members who have benefited from her largesse. Committee Chairman Sen. Lamar Alexander, R-Tenn., said in a statement that DeVos "will work tirelessly to ensure every child has access to a high quality education."

Critics say the choice of DeVos belies President-elect Donald Trump's promises to "drain the swamp" and bring new faces to politics and policy in Washington.

"He is basically proposing a bunch of people to be in the Cabinet that are political insiders with lots of money and have used that money to buy politicians and DeVos definitely fits that description," said Carmel Martin, executive vice president of the Center for American Progress, a liberal think-tank.

DeVos has long taken pride in her political and financial activity.

"I have decided . to stop taking offense at the suggestion that we are buying influence," DeVos wrote in a 1997 column in Roll Call. "Now I simply concede the point. They are right. We do expect something in return." She said wants to foster a conservative governing philosophy and respect for traditional values.

DeVos, a former Michigan Republican Party chairwoman, heads the American Federation for Children, an advocacy group that promotes school choice and voucher programs. She and members of her family have given millions of dollars to Republican candidates over nearly three decades, according to the Center for Responsive Politics.

She grew up in Holland, Michigan, one of four children of Edgar Prince, an engineer who made a fortune in an auto parts company. She met her husband Dick DeVos, an heir to the Amway marketing empire, while attending a Christian liberal arts college. Dick DeVos unsuccessfully ran for governor of Michigan in 2006. During that campaign he suggested that schools should teach intelligent design, a theory that holds that life was created by a higher force, along with evolution. The couple has four children, none of whom attended public school.

Her brother, Erik Prince, founded Blackwater, a private security company that the U.S. employed in the Iraq war and came under scrutiny when its guards were prosecuted in the deaths of 14 civilians in Baghdad in 2007.

DeVos has donated to the political campaigns of at least four committee members, according to the financial questionnaire she filed with the committee. Sen. Patty Murray of Washington, top Democrat on the committee, said she worries about DeVos' "extensive financial entanglements and potential conflicts of interest."

In response, Trump's transition team said teachers unions have donated to Democratic senators on the committee and DeVos has given money to members in both parties who support her education goals. Republicans also point out that Penny Pritzker was a major donor to Democrats and President Barack Obama before he picked her as commerce secretary.

DeVos spent the past two decades advancing charter schools — institutions that are run privately but financed with taxpayers' money. Her husband started an aviation-oriented charter school in Michigan. She also has pushed for providing low-income families with publicly funded vouchers to enable them to send their kids to private and religious schools of their choice.

Randi Weingarten, president of the American Federation of Teachers, said DeVos has an obvious antipathy to public schools and has "fought against any regulation that protected against cronyism and corruption."

DeVos supporters counter that injecting healthy competition into the public school system will be to everyone's benefit. "The ability to shop around for education options that work best for your child is really key here," said Mary Clare Reim, a research associate with the conservative Heritage Foundation.

Labor unions and civil rights groups also question whether DeVos' traditional beliefs may prevent her from championing the interests of LGBT students and other minorities.

DeVos has donated to a number of conservative groups, including Focus on the Family, which calls homosexuality a "sin" and supports "sexual orientation change efforts." Her record prompted five openly gay senators to write to the committee saying she's repeatedly tried to undermine LGBT rights.

But Greg McNeilly, a long-time aide to DeVos, said DeVos supports same-sex marriage and last donated to Focus on the Family many years ago, when the group was involved in character-building for children and "absolutely never" supported conversion therapy. McNeilly is gay.