Love, sex and death: What my fiancé's death taught me about the afterlife

"He isn't dead, he's right beside me" doesn't go over well, but this isn't grief-induced delirium, it's a full life 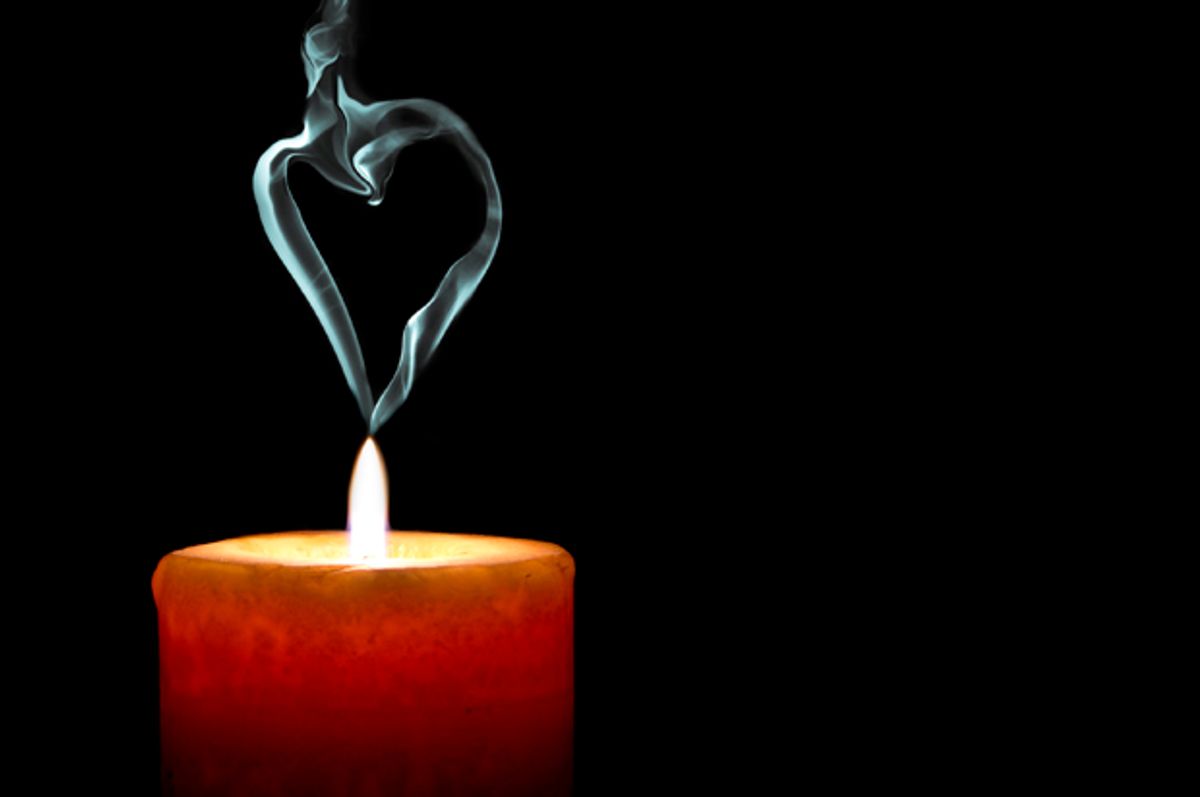 Seeing the spirits of the dearly departed didn't bode well for me living a normal childhood. While it felt entirely natural to me, my toddler conversations with long-dead relatives didn't do much for my mother's nerves, and my introversion didn't win me many friends. Rare is the kid who loves to be weird, and as a pupil in a convent school in Catholic Ireland, I wasn't one of them. So I ignored my visiting relatives until they stopped coming and became a normal teenager, arrogant undergrad and atheistic adult.

That changed when I met John.

I never shared other people's idea of romance — finding the right man and having kids and a house in the suburbs — not even when I moved to New York and met John, who was handsome and smart, artistic yet vulnerable, generous of spirit yet deeply wounded. When, after some unconventional and tumultuous years, he suddenly said we should get married, it hit me. In that moment I had a visceral remembrance of something I was born knowing but somewhere forgot — I was always meant to be with him.

Two months later, he took his bicycle out for his regular Saturday morning bike ride. By noon, he was dead.

Rare are the people who can actively listen, hold space and let the bereaved just be. Most people tried to fix my grief, make me better and offer platitudes and unsolicited advice: "He's in a better place" (without knowing that) or "You're young, you'll meet someone else" (without asking if I wanted to) or "These things happen for a reason" (implying he was meant to die). It was as if, having lost a leg, telling me "You can get a walking stick" would make me right as rain. People were unwilling or unable to see where I was to avoid doing harm. Many had an unconscious need to appease their own discomfort or project their inadequacies onto my perceived deprivation. Throngs lined up, eager to reassure me that grief takes a year (or two), which meant I'd be trolling singles bars in stilettos by summer and restored to wholeness once I found a new man. Pariahs are we widows and singletons, living outside a socially acceptable box.

But I had concerns beyond people's inability to let me grieve. Electronics had begun to turn on randomly, the radio turned on when a song he liked was playing, furniture creaked, black figures appeared before me, my arms and face were being touched and shoulders squeezed, and I could smell him.

Decades had passed since my last otherworldly visitations, and their memory seemed vague and unreal. Thinking I'd gone mad, I ended up sitting in the local priest's rectory (a place I hadn't been for 20 years), sobbing into a teacup. Father Michael quoted St. Dominic and explained how our loved ones send us signs to let us know they're OK. He inspired me to search for remotely plausible theories of the afterlife.

A week later, I slinked into a pew at the back of a Spiritualist church service, striving for anonymity and expecting fraudulence. I got neither. The pastor turned to me. "There's a man beside you," she said. "He's young, tall, blond, recently passed to Spirit. Seems to love cycling. He's very protective of you. Do you know who he is?"

It took some time to get past "how did she know that?" But with continual strange events and an increasing awareness of a presence, the evidence was soon overwhelming: Death was something more than decompiled atoms en route to cosmic reabsorption. Consciousness couldn't be an emergent property of the brain; it clearly survived in some form. But what?

Someone, presumably versed in the signs the priest spoke of, suggested he might send me a butterfly. I balked. "He had the driest sense of humor. I'd never associate him with something as dainty as a butterfly." After that, butterflies appeared everywhere: flying alongside me down the street, three or four sitting on the windows of every room I was in. One crashed into my head, another sat on the arm of my chair as I drank morning coffee. Hundreds, all told, had fluttered around me before the penny dropped.

"Are you sending me butterflies?"

A butterfly landed on my foot.

People asked me later if that was like an epiphany, but it was more like holy shit! This wasn't some abstract heavenly concept; his sense of humor was unmistakable. In that moment, everything I thought I knew about life and death was upended. We weren't separated by space and time; we were united in something bigger than ourselves. I couldn't get on board with a lot of the New Age theories I encountered, so I devoured every word in search of explanations, turning first to science, Raymond Moody, Eben Alexander, Stuart Hameroff, even Robert Lanza, then to the Bible, Vedanta, and Eastern spiritual teachings.

In the ensuing days and weeks, my childhood ability to communicate with the dead returned rapidly. I found a renewed excitement about life as John and I learned to speak a new language that relied on sharing images in my mind's eye, sensory perception and intuitive whispers.

As my ability to communicate with the dearly departed increased, my ability to communicate with the living declined. Saying, "he isn't dead, he's right beside me" didn't go over well. People thought it was grief-induced delirium and warned of the alleged dangers of not letting him go: I was holding him back, or I was keeping him out of "the light" or I was disturbing his peace. That he had chosen to awaken me to the continuity of life, to my part in something far greater, was crushed beneath boundless biases.

The challenge of the unseen is that it can't be proved or disproved. But people's conjecture became my fear. His death stripped me of my desire to live, and then his survival inspired me to be and do something more. Now, after losing him once, fear of harming him meant I had to let him go again and return to the wretchedness I had so recently known. I told him if he would be happier elsewhere not to be with me when I woke the next morning, not to share images, or thoughts or feelings as he had been. Then I cried myself to sleep.

The next morning, just as I woke, an oversized pink Gerber daisy filled the field of vision in my mind's eye. Emotionally drained and confused, I dressed and went for coffee. En route to the deli, I saw the local florist stacking buckets of bright pink Gerber daisies on his outdoor shelves. John had answered. I am here.

Needless to say, I became unwilling to share my existential revelation again. I had no desire to proselytize but didn't want to be judged and sentenced by those whose superstitions were harmful or who wouldn't or couldn't understand that I had abundance in ways they couldn't fathom.

That's what blending with John became: a fusion of atoms, a merging of thoughts, an understanding of the children we'd been, the wounded adults we became and the spirit that didn't die. I was making a wholehearted leap into what Thich Nhat Hanh calls "inter-being" with another, to surrendering to another my perception of myself as separate from all things. From this, I had my first true ecstatic experience.

Surrender is easier said than done. It demands, I found, the courage to accept and heal ego issues, old wounds and self-perceptions. Every pain and issue I'd long since buried was dragged out of the dark: the shame hiding behind my arrogance, the inferiority behind my perfectionism, the unseen child behind my self-absorption. As an ugly cast of characters trod the boards in need of forgiveness and release, I feared he would leave. Yet, he witnessed the healing of these horrors that I'd done well to hide. He stayed and soothed, and I cried and experienced the most complete feeling of love and belonging. When he died, I thought I couldn't live, but he taught me that I never lived before he died.

Today, to the chagrin of many who don't or won't understand, I choose to remain with John and to grow in this relationship that has awakened me to my inherent worth and eternal nature. I strive to give others what he has given to me: the knowledge that we are never alone and that love, like life, never dies. I strive to balance the rational and the mystical to help people understand the nature of the afterlife and to refute the superstition and closed-minded skepticism that robs us of undying love. In this awakening, we learn we are part of something greater, and are greater in ourselves than we ever dreamed we could be.

Karen Frances McCarthy is a published author and former political journalist and embedded war correspondent. She is an accredited Spiritualist medium, is writing her second book about science and religion and is preparing for a PhD in Religious Studies.