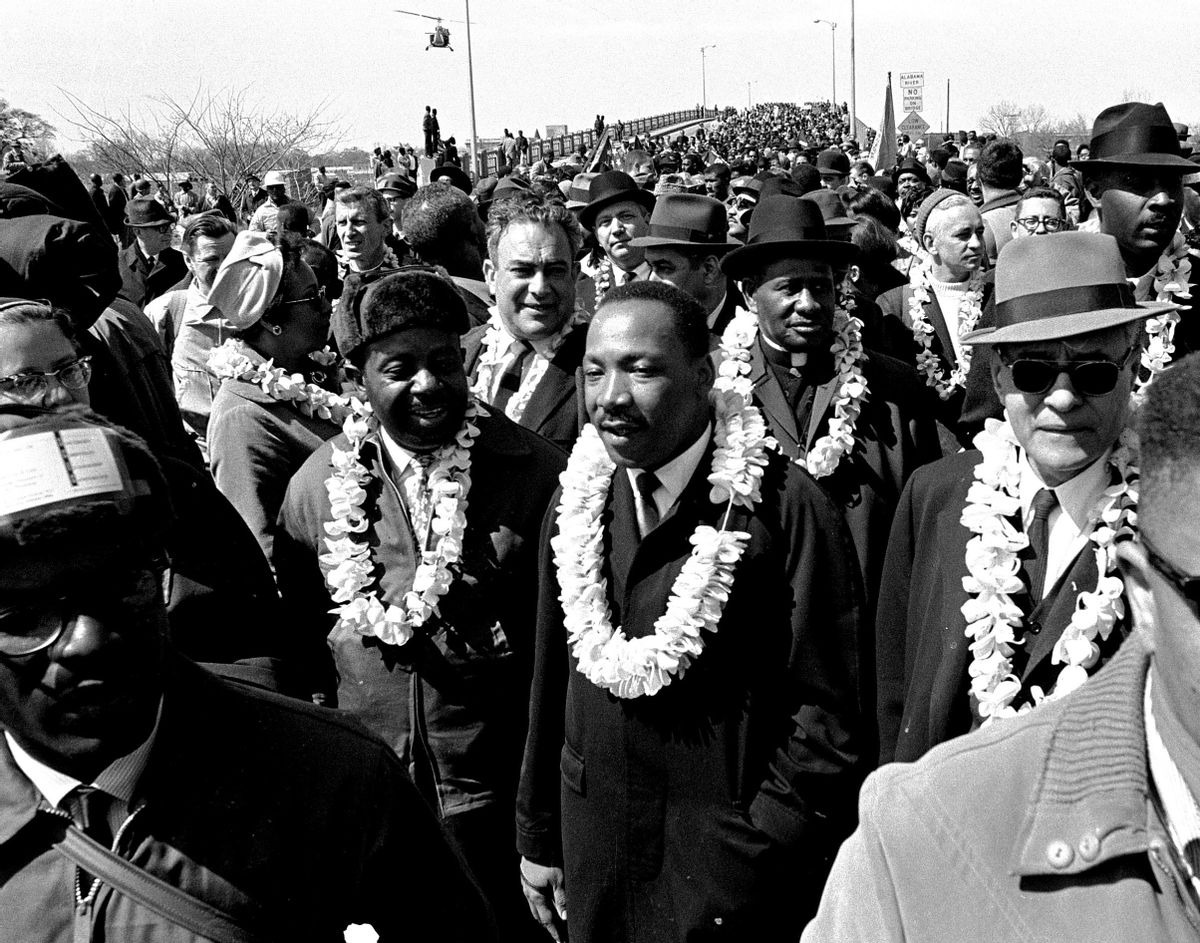 The Martin Luther King Jr. who is cynically trotted out every time racial unrest erupts in our cities is the MLK who can be conveniently used to prop up the status quo. He is MLK reduced to “I Have A Dream,” used in conservative political ads to scare-monger about invading, job-stealing Mexican immigrants. He is the almost wholly fabricated MLK whom the modern GOP claims would today be one of their own, presumably standing alongside them as they vote against the poor, people of color and women of every race at every opportunity. He is MLK reimagined as the passive figure the facist, racist elerising in this country wants us to be as they lean into the boot on our necks.

In reality, those examples rely on half-truths and half-reveals of who MLK truly was. In real, big-picture life, MLK was far more radical than the cherry-picked lines from his speeches and books would suggest, a man who moved further left over the course of his long and weary fight for African-American civil rights. By 1966, MLK had become an outspoken opponent of "liberal" white complicity in white supremacy, of American imperialism and warmongering, of the capitalist system itself. Modern right-wingers’ use of quotes from MLK (here are a few examples) twist and misuse his words in ways that belie much of what he ultimately came to stand for.

The next time you see MLK corrupted and misused as a tool of capitalism, racism, unchecked white supremacy and war, recall that MLK said “a riot is the language of the unheard.” Here are several more examples of MLK’s most radical statements.

1. “Why is equality so assiduously avoided? Why does white America delude itself, and how does it rationalize the evil it retains?

The majority of white Americans consider themselves sincerely committed to justice for the Negro. They believe that American society is essentially hospitable to fair play and to steady growth toward a middle-class Utopia embodying racial harmony. But unfortunately this is a fantasy of self-deception and comfortable vanity.”

2. “I contend that the cry of "Black Power" is, at bottom, a reaction to the reluctance of white power to make the kind of changes necessary to make justice a reality for the Negro. I think that we've got to see that a riot is the language of the unheard. And, what is it that America has failed to hear? It has failed to hear that the economic plight of the Negro poor has worsened over the last few years."

3. "But it is not enough for me to stand before you tonight and condemn riots. It would be morally irresponsible for me to do that without, at the same time, condemning the contingent, intolerable conditions that exist in our society. These conditions are the things that cause individuals to feel that they have no other alternative than to engage in violent rebellions to get attention. And I must say tonight that a riot is the language of the unheard. And what is it America has failed to hear?...It has failed to hear that the promises of freedom and justice have not been met. And it has failed to hear that large segments of white society are more concerned about tranquility and the status quo than about justice and humanity."

4. “When machines and computers, profit motives and property rights are considered more important than people, the giant triplets of racism, extreme materialism and militarism are incapable of being conquered.”

5. “Again we have deluded ourselves into believing the myth that Capitalism grew and prospered out of the Protestant ethic of hard work and sacrifice. The fact is that capitalism was built on the exploitation and suffering of black slaves and continues to thrive on the exploitation of the poor – both black and white, both here and abroad.”

6. “A nation that continues year after year to spend more money on military defense than on programs of social uplift is approaching spiritual death.”

“Whites, it must frankly be said, are not putting in a similar mass effort to reeducate themselves out of their racial ignorance. It is an aspect of their sense of superiority that the white people of America believe they have so little to learn. The reality of substantial investment to assist Negroes into the twentieth century, adjusting to Negro neighbors and genuine school integration, is still a nightmare for all too many white Americans…These are the deepest causes for contemporary abrasions between the races. Loose and easy language about equality, resonant resolutions about brotherhood fall pleasantly on the ear, but for the Negro there is a credibility gap he cannot overlook. He remembers that with each modest advance the white population promptly raises the argument that the Negro has come far enough. Each step forward accents an ever-present tendency to backlash.”

8. “The evils of capitalism are as real as the evils of militarism and evils of racism.”

9. "First, I must confess that over the past few years I have been gravely disappointed with the white moderate. I have almost reached the regrettable conclusion that the Negro's great stumbling block in his stride toward freedom is not the White Citizen's Counciler or the Ku Klux Klanner, but the white moderate, who is more devoted to "order" than to justice; who prefers a negative peace which is the absence of tension to a positive peace which is the presence of justice; who constantly says: "I agree with you in the goal you seek, but I cannot agree with your methods of direct action"; who paternalistically believes he can set the timetable for another man's freedom; who lives by a mythical concept of time and who constantly advises the Negro to wait for a "more convenient season." Shallow understanding from people of good will is more frustrating than absolute misunderstanding from people of ill will. Lukewarm acceptance is much more bewildering than outright rejection."