Paul Ryan's empty moral core: Fight against Obamacare shows a man on a mission to win at any cost

Bill Maher was right about Paul Ryan; now Ryan's willing to work around the truth to defeat the ACA, no matter what 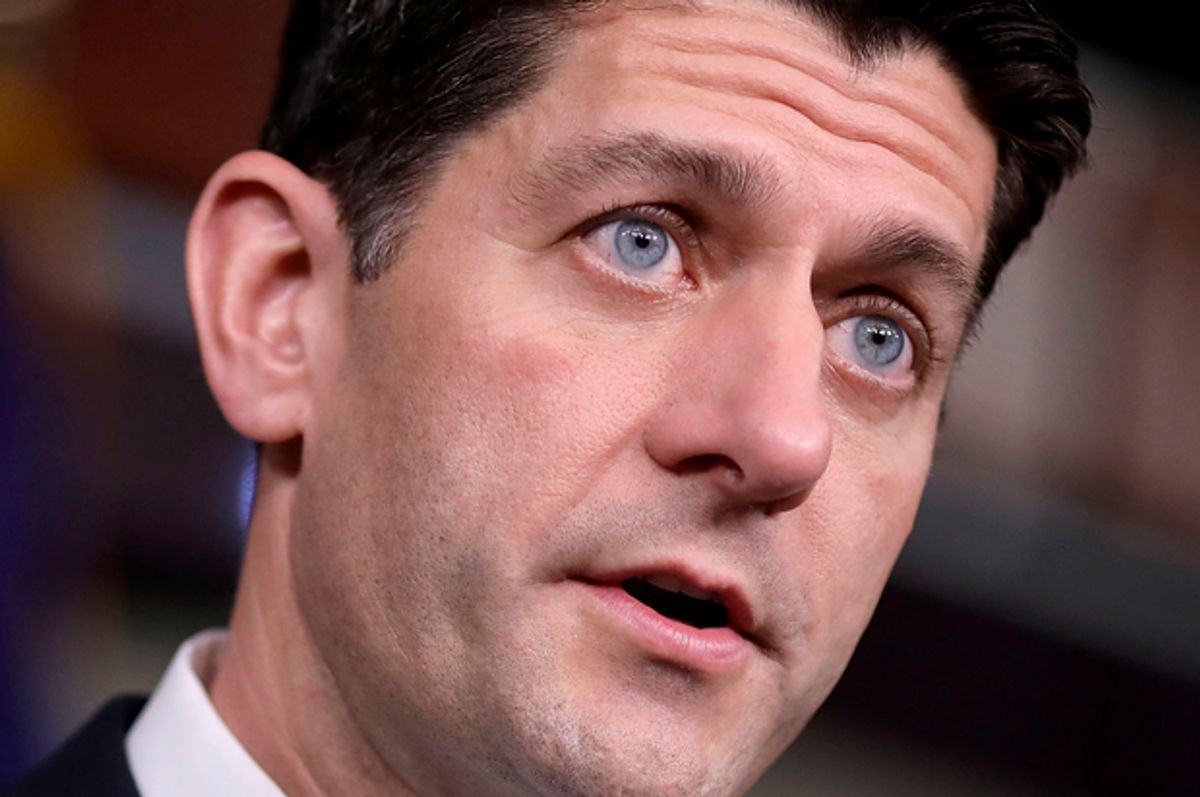 You ever meet that annoying person who talks, talks and continues to talk? They talk to hear themselves talking, until their mouth hurts, their lips chap and bleed, as they utter loads and loads of B.S., always making up stories, exaggerating and lying just for the sport of it? That’s Paul Ryan. Bill Maher summed it up best when he told Larry King that Paul Ryan "has the moral core of the pimp from ‘Taxi Driver’."

This is a guy who will just say anything, I mean . . .  wow. I thought Mitt Romney was a facile liar. This guy, you know, he even lies about his marathon times, you know. . . . He’s just one of those people who when he’s speaking, he’s lying.

Like many Americans, I first heard of Paul in 2012 when Mitt Romney selected him to be his running mate in his failed presidential campaign. The eager young congressman from Wisconsin hit the stump with a rich collection of lies like I’ve never heard before. I mean, Ryan was like an X-Man whose special power was spewing bulls**t -- and Professor Xavier trained him well. If Fake News were a person, it would be him, because that boy has a wild imagination, from claiming during the 2012 election that Obama was essentially stealing money directly from taxpayers and that Obama's health care plan is bankrupting the country to saying he finished 113th in a marathon that he really placed 1,919th in.

So I spoke to God about this. I said, “God, please take this delusional fool Romney and his lying little reject of a sidekick Ryan away from politics, away from my TV screen, and banish them from my timelines. I know I don’t pray much, but I can’t take them anymore.”

And even though God didn’t speak back directly to me, the duo disappeared right after the 2012 election. They both were basically out of the conversation until Paul popped up again two years later in 2014 with fresh new lies. He probably never stopped lying; people just stopped recording them due to lack of hard drive space.

This time in a 2014 interview with Bill Bennett, Ryan said, “We have got this tailspin of culture, in our inner cities in particular, of men not working and just generations of men not even thinking about working or learning to value the culture of work, so there is a real culture problem here that has to be dealt with.” Error! Hyperlink reference not valid.

That had to be one of the most disrespectful comments I've ever heard. Every black man I know has 10 jobs — even me.

Forget racism, because I guess Ryan thinks that doesn’t exist. He probably thinks black people want to break the law because jail is cool and you get free meals. And I’m sure Ryan has a great reason for ignoring the multiple studies that show qualified black applicants have been denied jobs simply because they have black names, or the reports that prove white people use and sell more drugs even though African-Americans are doing more time for their sale and use. I guess the narrative of the guy who didn’t get a call back for a job because of his black name, so he had to sell drugs — that white Americans wouldn’t go to jail for buying — in order to survive, only to be arrested, serve time, exit and come home to apply for jobs that don’t call back felons or people with black names is not a real thing to Paul Ryan, who was born rich. He probably doesn’t really know any black people — at the very least, he seems grossly unqualified to speak on any issue affecting black people — but he does anyway, because just like in his miraculous marathon time and Obama critiques, facts, research, intellect and experience don’t matter.

And then the clown disappeared from my reality again until he made headlines for not endorsing Donald Trump, which shocked me when the little guy finally found his spine and decided to put our country first. That only lasted a month or so. Soon after, he got on his knees — like Ted Cruz, who apparently has proven to be both spineless and chinless, and Chris Christie — accepting Trump as his master. Ryan even said that Donald Trump’s win was “the most incredible political feat I have seen in my lifetime.”

Like being elected black in a country that discriminates against black people around the clock, as Obama did, is easy?

Just when I thought Ryan had reached an all-time low, he went lower — really low, like under the dirt that’s under the gum stuck to the bottom of your sneaker low.

Ryan held a town hall — the most uninspiring town hall I’ve ever seen in my life — last Thursday, where he touched on a number of issues, including health care. Jeff Jeans, a man who has identified as a lifelong Republican who worked on the Ronald Reagan and George Bush campaigns, told Ryan that he opposed the Affordable Care Act for political reasons until it saved his life. Jeans continued, "I want to thank President Obama from the bottom of my heart because I would be dead if it weren't for him.” Ryan didn’t clap with the crowd. He just sat there with a dumbstruck look on his face, gave a trash response — citing premium increases for insurance customers using Obamacare in Arizona, Jeans' home state, that lacked very important context — proving to be just another hack who cares about nothing but himself and his trash political agenda. Wisconsin should be ashamed.