Premiums may spike 25 percent, but GOP complains that its (nonexistent) replacement plan is being ignored 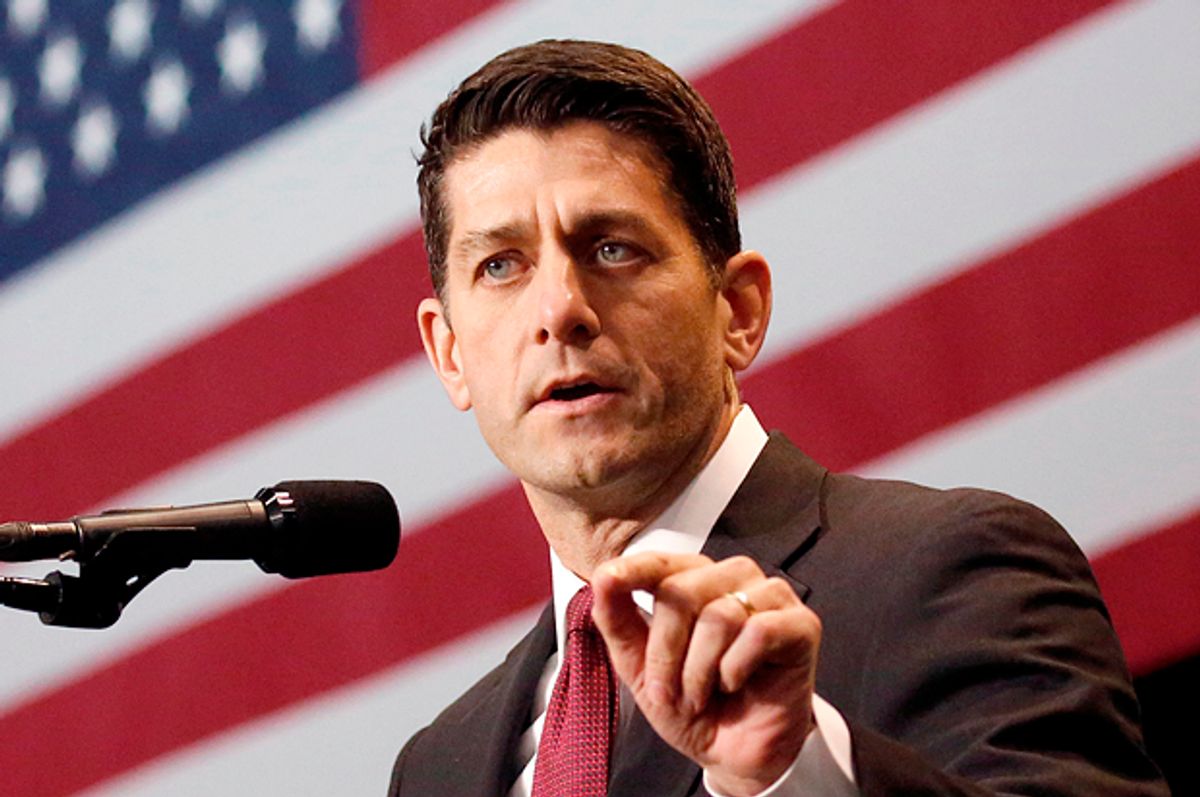 The congressional GOP's messaging on Obamacare repeal does not make sense. It’s completely incoherent, self-defeating and ridiculous. I will allow House Speaker Paul Ryan, R-Wis., the honor of explaining to everyone just how utterly disjointed and preposterous his party’s position is on health care, since he has been the point person on this issue and is largely responsible for crafting the House GOP’s message on Obamacare repeal.

Pop on over to Ryan’s website and you’ll see that he posted some excerpts from a recent talk-radio interview he gave where the Affordable Care Act came up. There are two quotes highlighted by Ryan's office that sum up his position on Obamacare. The first is “This [Obamacare] thing is collapsing under its own weight, and we have to step in and save people from this.” The second is “The rug’s not going to be pulled out from under people [post-repeal] . . . There’s going to clearly be a transition period.”

This internally inconsistent gibberish is the foundation upon which the GOP’s health care strategy rests. Republicans are politically obligated to repeal the ACA but have never come close to any agreement about what comes next. So they punt on that question and try to argue that passing a repeal bill will both rescue America and also maintain the status quo while they figure out something else out.

Obviously the problem here  is that they can’t have it both ways. Repealing Obamacare will have consequences, and the Congressional Budget Office issued a report onTuesday that laid out what those consequences will be. Per the budget office, pushing forward repeal legislation like the 2015 bill that passed via budget reconciliation by congressional Republicans (and then was vetoed by President Barack Obama) will wreak havoc both in the short and long term.

Starting in 2018, the number of uninsured people in the United States would jump by 20 million. Let's pause for a moment and repeat that: Twenty million people, a bit more than 6 percent of the population, would lose health insurance.

“Later, after the elimination of the ACA’s expansion of Medicaid eligibility and of subsidies for insurance purchased through the ACA marketplaces, that number would increase to 27 million, and then to 32 million in 2026,” the report noted. Insurance premiums will also spike as a consequence of repeal, increasing “20 percent to 25 percent — relative to projections under current law — in the first new plan year following enactment.” And premiums will only continue to rise as time passes, the Congressional Budget Office found.

The coverage losses will stem partly from people choosing to go without insurance but will also be driven by insurers' exodus from certain markets that will leave many Americans who want insurance without options. “Roughly 10 percent of the population would be living in an area that had no insurer participating in the nongroup market,” the budget office noted. Premiums will go up because healthy, younger people (no longer obligated to purchase insurance by the individual mandate) will opt to go without health insurance, leaving insurers with a customer base of sick, older people who are more expensive to cover.

Obviously, Republicans object to this finding. But in objecting, they’ve made clear just how hollow all their promises of “repeal and replace” or “repeal and delay” are. House Majority Whip Steve Scalise, R-La., tweeted that the budget office screwed up since it didn’t take into account the Republican replacement plan that doesn’t exist.

Likewise, a spokesperson for Paul Ryan complained that the Congressional Budget Office failed to incorporate into its analysis what the incoming Trump administration has said about health care policy.

If there were an actual replacement plan that the budget office could have factored in, it might have produced different numbers. But Republicans have been resistant to producing such a plan precisely because the office would almost certainly find that it will cover fewer people than the Affordable Care Act.

Notably, the reaction by Republicans has not been to become serious about producing a coherent health care bill. Rather, they have sought only to bewilder, obfuscate and attack agencies like the Congressional Budget Office that produce these meddling estimates.