"People don't expect you to be Oprah": Author Emily McDowell on empathy for amateurs 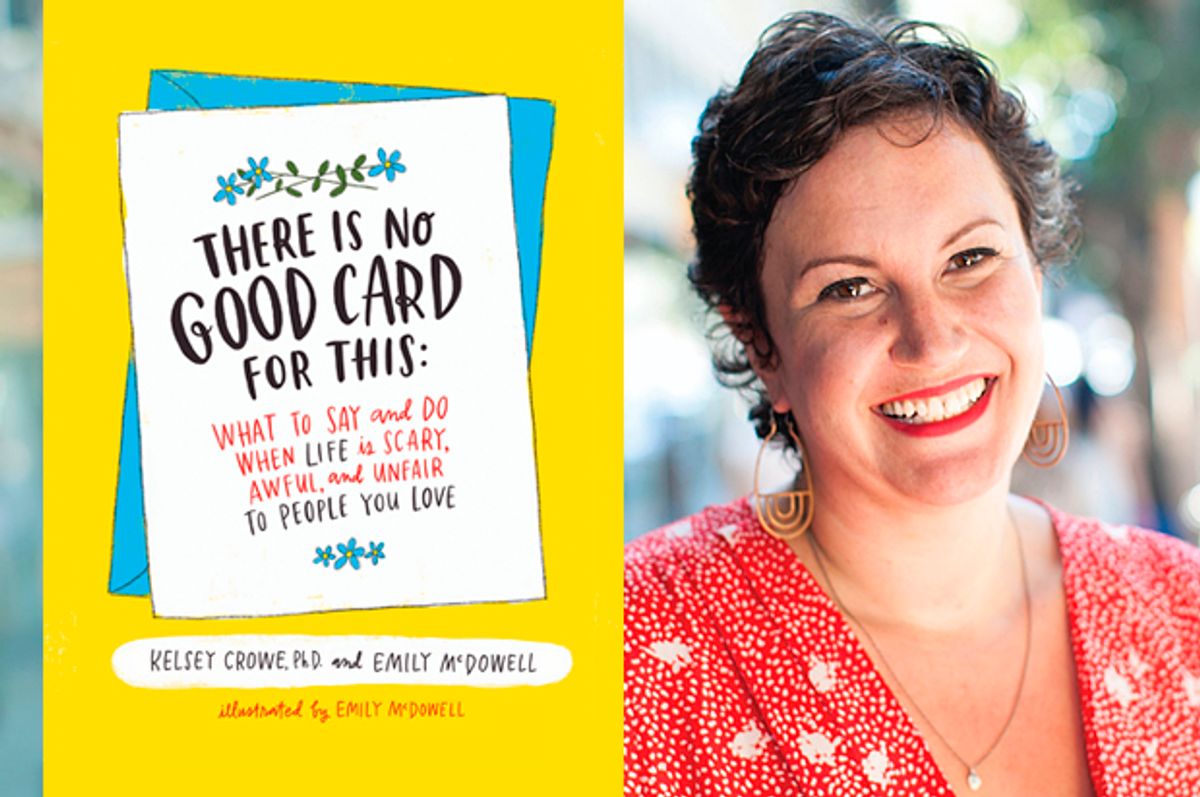 Emily McDowell does not aspire to be your Oprah. To give you an idea how not like Oprah the Los Angeles illustrator is, I first discovered her a few years ago via her hilariously four-letter-worded tote bags. Two years ago, she gained international attention for her funny, heartfelt line of "empathy cards," a series of greetings she designed for those inevitable life moments that Hallmark just doesn't seem to cover. (Sample sentiment: "I know this day really sucks for you.") Now she and co-author Kelsey Crowe, Ph.D., have teamed up to create the new, self-explanatory guidebook titled "There Is No Good Card for This: What to Say and Do When Life Is Scary, Awful, and Unfair to People You Love."

These two women, like all humans, have had personal experience with very difficult life events. They know what it's like to endure illness and grief, and they know what it's like to watch the people in their lives endure them as well. They know we don't all always rise to the occasion heroically. We want to be helpful and kind, but we fear saying the wrong thing. So sometimes we say nothing at all. And they're here to help us get over it, with concrete advice, actions and their own real life experience about how to be better at stepping up for others through life's storms.

Salon spoke recently to McDowell via phone about what to say when there are no words and why we all sometimes need an empathy boot camp.

I was thinking of you and this book because I recently had someone say something to me that was just so powerfully ignorant that I wanted to educate her. Then I thought, That's not my job but maybe someone will give her this book. So tell me a little bit about the evolution of this. Two years ago you started with the empathy cards. How did you turn that into a book and how did you partner with Kelsey Crowe?

I knew that when I released [the cards] that they would really strike a nerve with people who had been through something like this — either on the caring for side or the patient or somebody who's been through that stuff side. But I had no idea that it was so pervasive and cross-cultural and something that so many people were going to be able to relate to and appreciate.

After that some publishers reached out and said, "Would you do a book?" I said, "Well, yes but I think that the book that needs to happen is something that picks up where the cards leave off, written in a way that's accessible and relatable and doesn't feel like a self-help book and doesn't feel preachy and that's not religious or spiritual. It's just basically, in the same tone as the cards, a guide to showing up, because this is a tremendously huge problem."

Then the second part of it was I am not personally qualified to write that book. I wanted that book to be real and research driven. I know enough to be able to do cards and to have conversations with people, but I'm not a researcher and I don't have a scientific background in empathy. I really think that this deserves some real information and material.

Kelsey had actually gone to school for public policy, had been working in policy and then got breast cancer and ended up shifting her field of study based on her own experiences. She had started this nonprofit called Help Each Other Out where they do these empathy boot camps. She goes around and basically teaches a room full of people, like, how to show up.

She did a ton of research and spent a few years just talking to hundreds of people and reading and giving herself an education on all of this stuff, and that's now her primary field of study. A mutual friend said, "Oh, you should meet my friend Kelsey; this is what she does and you guys are, like, very similar in your sensibility, so you should meet." It was really like the two skill sets just came together and we're really perfect for each other in terms of balancing the needs of the book and it was very much a 50-50 project.

They don't know what to say or do either most of the time, and so the thing that's really valuable is for you to just show up as your own flawed self and try. It's the act of the trying that is really the most meaningful thing. Then what we try to do in the rest of the book is to help give some guidelines for making people more confident about trying.

I appreciate that you really identify the ways that we try and maybe screw up. I love when you identify the different types of empathizers and how they will relate. You're the optimist or you're the doom and gloomer, for example. You can look at it and see OK, here's where maybe you're not maximizing your helpfulness and here's where you can use that in a way that's actually effective.

Most people who love you are going to try and they're going to step on your toes and they're going to do the wrong thing, but can you look at that and say, "This is coming from a place of real love and compassion" and then try to do better with it and meet each other halfway. So what do you want people to do with this book? What's your goal for it?

My goal for it is for people to be able to use it to help them feel more confident in showing up — however they want to show up. This book isn't going to try to turn you into a spiritual guru or turn you into someone you're not. It's really about using the skills that you already have to be able to feel confident showing up as yourself in situations when previously you might not have known what to do.

I think it's also about sharing the fact that we all have these experiences, that it's universal. And we live in a culture that really does make us feel ashamed of that.

Well, and it's just so interesting, the one thing we all have in common is that we're all going to die. All of us will die and that's the one thing that we don't talk about.

My best friend and I used to talk about this all the time like, "So when do you say that you survived?" My oncologist once said, "You say you're a cancer survivor when you die of something else." And the shame of divorce or losing a job or getting sick is that, I think, culturally, we equate all those things with failure. I always feel that a big part of the reason that people are so not great at helping other people is because there's a sense that someone has failed somehow and we don't want to embarrass them.

Right! Like if we bring it up then it's going to make it worse or we should pretend this didn't happen.

As opposed to having that empathy and being able to say, "Hey, something like this has happened to me too! It happens to everybody! How can I see you and recognize this and not be scared of it and not see it as failure, but see it as a human condition? Whatever it is, it's just the common human experience."

It's so funny the way that our brains work around that stuff because we think if we don't bring this up, then this person isn't thinking about this 24 hours a day. The person's reality is that they're thinking about it all the time and that it is a relief to have someone else bring it up because it makes them feel understood. It makes people feel like "Oh, yes. Thank you for understanding that this is my reality now. Thanks for understanding and being willing to go here with me instead of just trying to pretend that it's not a thing."

The book really uses these real-life conversations and examples of that and also really makes it clear that the people who step up for you are not always the people you expect. People who you thought would be there in a heartbeat maybe won't be. But the other thing is other people who you never imagined will become stars in your life.

If you're going into it with expectation, you'll always be disappointed and sad because it's never going to match up with your expectations of who's going to do what. It's about being open to connection coming from someone else and support coming from somewhere else besides maybe your friend who isn't able to show up for you the way that you had expected. If you're not open to those connections, it makes it so much more difficult.

It's just about kind of relearning so many things and you just wind up in a new place. It's like the show of your life gets recast and suddenly someone who wasn't the star before is suddenly the star and someone who had a really major role now is an occasional guest character.

Right. One hundred percent of humans will experience this.

One hundred percent of humans experience illness and disappointment and sadness and loss and then ultimately death and grief. Just kind of acknowledging that that it's not some rare, weird unusual thing, that it's part of the human experience is a big deal. How can we get through it in as loving a way as possible?

Our goal with this book was giving people the tools, but the context in which we created this book was we both really wanted to take a scary topic that freaks people out and bring it to a place that felt conversational and that felt relatable, no matter who you are. [We wanted it to be] something you'd want to read about versus "I have to buy this book because I know someone who's sick and so, like, crap, where's the section about XYZ?"

I wanted to write it in a way that was relatable to people and wouldn't turn off people who normally won't be into self-help books. What we would love is if it serves to normalize the conversation around this stuff. Like recognizing that this is a part of life that everyone is going to deal with, I wanted this to be an exception to the self-help genre. And so this is just like a guide to that part of life.