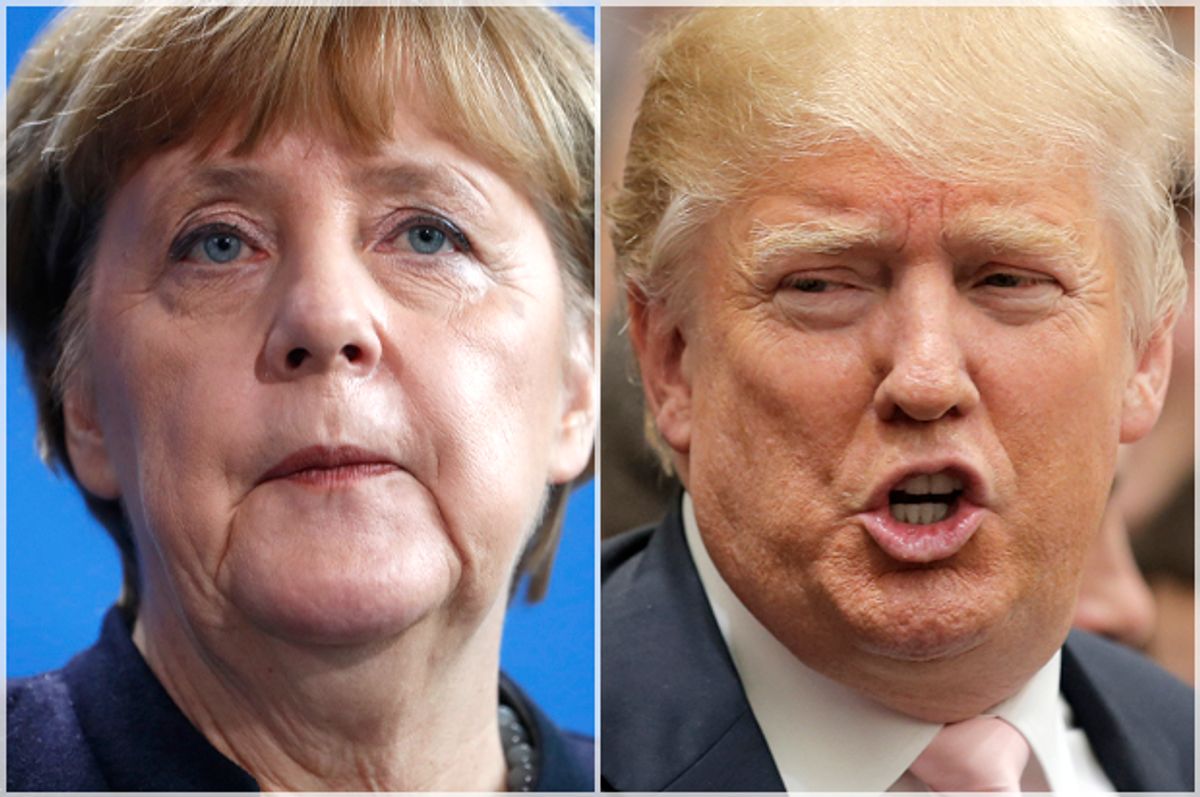 President-elect Donald Trump has alarmed America's European allies with proclamations against NATO and the European Union that are worrying for most of Europe — but are being applauded by Vladimir Putin's Russia.

"People want their own identity, so if you ask me, others, I believe others will leave," Trump said about the EU during a weekend interview with Germany's Bild and the Times of London. He added that, when it comes to the EU's future, "I don't think it matters much for the United States."

Furthering his right-wing talking points, Trump depicted the EU as "basically a vehicle for Germany" to control the markets of other nations and slammed German Chancellor Angela Merkel for making a "very catastrophic mistake" when she allowed refugees into Europe.

When discussing NATO, Trump dismissed the alliance as "obsolete" and "very unfair to the United States," even as he qualified his criticism by insisting that "NATO is very important to me."

Trump's comments received a resounding reception from Putin's Russia. "The systematic goal of this organization is confrontation," declared Putin's press spokesman Dmitry Peskov. Russia has also been blasted in the past by the European Parliament for spreading "disinformation and propaganda warfare" into European countries in the hope of dissolving the European alliance.

Meanwhile, Merkel tried to downplay Trump's comments by remarking that they're consistent with what he has said in the past and encouraging Europeans to feel more self-reliant.

"They have been known for a while — my positions are also known," Merkel told reporters in Berlin on Monday. "I think we Europeans have control of our destiny."

Danish Foreign Minister Anders Samuelsen was less diplomatic in condemning Trump's comments, telling the Associated Press that reality is "perhaps more difficult than what is going on on Twitter."

German Foreign Minister Frank-Walter Steinmeier was more worried, telling reporters, "I've spoken today not only with EU foreign ministers but NATO foreign ministers as well and can report that the signals are that there's been no easing of tensions."

The dangers of undermining America's alliance with Europe are difficult to overstate. Both NATO and the EU have helped the United States and Europe become one another's strongest military and economic allies in the seventy years following World War Two, as well as mitigating conflicts between European member nations by creating a climate of mutual financial self-interest. Perhaps most importantly, they have protected all of the concerned nations from Russian imperialist aggression, such as has been evident in recent years by that nation's invasion of Georgia and Ukraine.

“What Trump proposes is [American] geopolitical suicide,” wrote Daniel Nexon, a professor at Georgetown University, on the blog Lawyers, Guns, and Money. “Make no mistake: you should be very worried right now.”