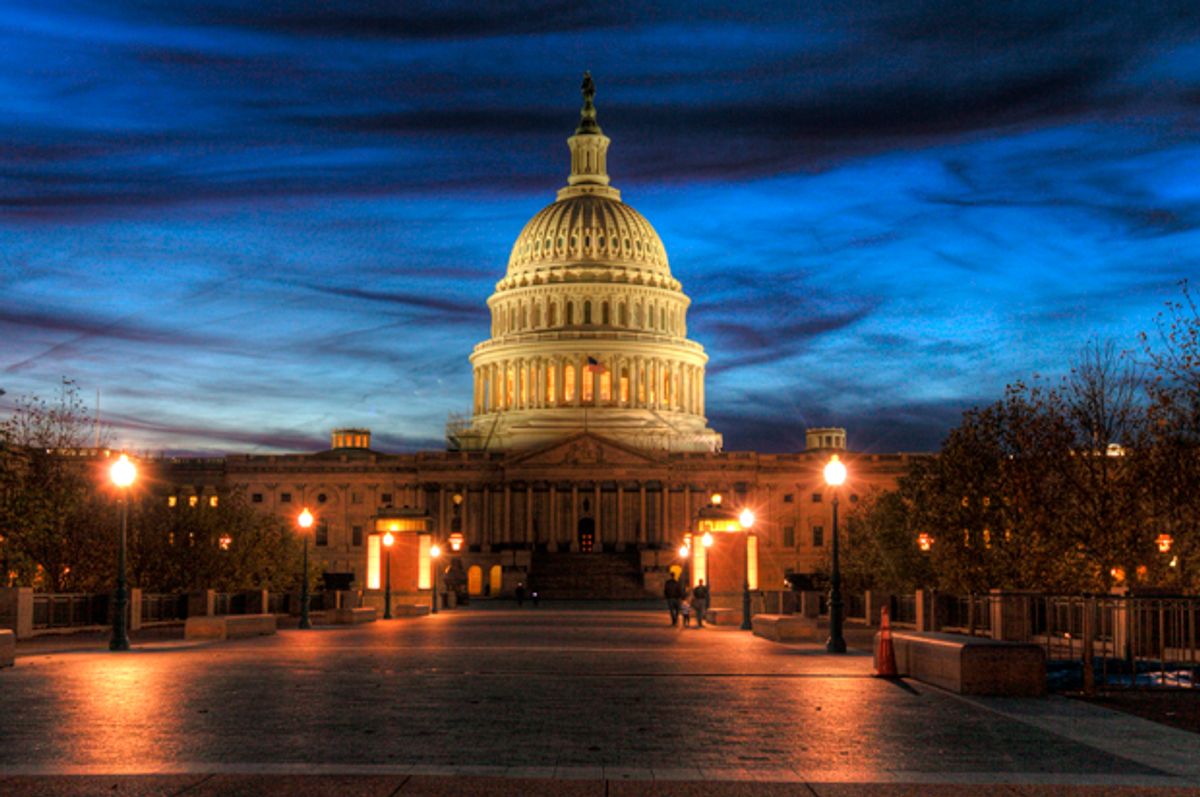 Among all the afflictions wreaking havoc in our nation, the most dangerous may be our collective inattentional blindness, the psychological condition that makes it possible for us to ignore abnormal objects or occurrences within our field of vision.  We’re so busy paying attention to the blaring narrative — the barrage of insults being traded between “our” side and “theirs,” the dismissive denial of brewing problems — that we fail to notice the barbarians strolling into the castle in full view and lowering the portcullis behind them, locking out all but those they favor.

Frontline’s “Divided States of America,” airing 9 p.m. Tuesday and Wednesday on PBS member stations, isn’t the cure for this national ailment. Even if it were, it arrives too late. The nation long ago drifted into partisan schism. Only now are we beginning to understand the grave threat this polarization poses to the democratic principles we profess to hold dear.

This two-part series is an exercise in what Frontline does best, which is to rewind recent history to a major turning point and meticulously examine each significant step that brought us to where we are now.

“Divided States of America” is not at an exhaustive view of everything that transpired between the run-up to the 2008 election and the dumbfounding sight of reality-television star Donald Trump as the president-elect, shaking hands with President Barack Obama inside the White House. To effectively provide that would take much more than the four hours that the series’ director, producer and writer Michael Kirk allotted for this particular examination, one of several Frontline appraisals of the circumstances that catalyzed Trump’s rise to power.

Instead, “Divided States of America” sees our rift as a result of a combination of factors stemming from the Republican leaders’ calculated decision to obstruct Obama’s efforts as the nation sped toward a financial cliff, the far-right’s fostering of nativism and the impossible choices faced by America’s first black president when racial tensions came to a head.

In narrowing its focus to the political, economic and social flash points that intensified the electorate’s distrust of the federal government and shredded our “one nation” myth, “Divided States of America” cuts away the obfuscating headlines. In doing so, it shows us the splinters that led to the necrotizing infection weakening our government’s foundation.

Even the typical headline skimmer is aware of the maladies that brought us to where we are today: the terrifying financial crisis of 2008 that met Barack Obama as he came into office. The recession that dogged his first four years and the furor over the spending he championed to spark economic recovery. The Tea Party’s rise and the perpetuation of the birther lie. The eruption of gun violence, including the killing of Trayvon Martin and followed by the massacre of children and teachers at Sandy Hook Elementary, that has prompted America to confront the hypocrisy of its leadership.

Martin’s shooting by George Zimmerman, a private citizen who was subsequently acquitted, followed by Michael Brown’s killing by a police officer in Ferguson, Missouri, dispelled the fantasy of a supposedly post-racial America. More shootings of unarmed black men and women by the police followed, further exposing racial inequities within the justice system. Very little of the information presented in “Divided States of America” is news, but perhaps absorbing the sum of it over two nights may inspire some soul-searching.

Kirk pulls together voices from each side of the aisle as well as media analysts to bolster the framework of “Divided States of America. Ousted speaker of the House John Boehner, former House majority leader Eric Cantor, conservative pollster Frank Luntz, former GOP speaker Newt Gingrich and Trump counselor Kellyanne Conway have their say, as do former Treasury secretary Timothy Geithner, New Yorker editor David Remnick, Washington Post reporter Wesley Lowery, Obama administration senior adviser Valerie Jarrett and The Atlantic’s Ta-Nehisi Coates. Both conservative operative Grover Norquist and New Yorker contributor Jelani Cobb are called upon to provide context to the consequences of decisions made by President Obama and those who opposed him. The intention to give both sides a fair shake is obvious, and the views shared are bracingly candid.

Kirk’s list of Frontline projects includes the quadrennial election specials known as “The Choice,” the most recent providing gimlet-eyed biographies of Trump and his Democratic opponent Hillary Clinton, and he used the same sobering style employed in those works to penetrating effect here.

The measured pacing of the first and second parts enable the audience to view the moves that inflamed or resulted from each of the challenges with bitter clarity. But the docuseries also lets voters appreciate the exasperating conundrums faced by the outgoing president and the old-guard GOP for what they were: attempts to establish a foothold of power on a beach quickly eroding beneath both parties. Establishment Republicans rose to power in part by playing to the nationalist inclinations of the most extreme members of their base but were blindsided when their penchant for disruption and gridlock make them overwhelmingly unpopular. But concerted efforts by shrieking conservative commentators to paint Obama as a radical, and worse, also took their toll.

Whether Kirk’s treatment of each side can be considered fair depends on a viewer’s perspective, a matter over which he has no control and that, in truth, speaks to the point of this work.

It’s worth noting that “Divided States of America” steers clear of the presidential election season’s hideousness and barely mentions Clinton at all. To do so would draw focus away on the guiding thesis of the miniseries; besides, that aspect is bound to get a workout in Kirk’s next Frontline film, “Trump’s Road to the White House,” airing next Tuesday.

America is hours away from the inauguration of a man who has demonstrated his insistence on solidifying the nation’s divisions and using them to his advantage. Right now, we’re still negotiating the tumult created by the factors enumerated by “Divided States of America” and girding ourselves to contend with others speeding toward us. It stands as a warning about the ways that our baser fears and passions have been exploited to blur our view of looming crises. Perhaps it can also embolden viewers to face America’s expanding ideological and spiritual rift with open eyes and take action.