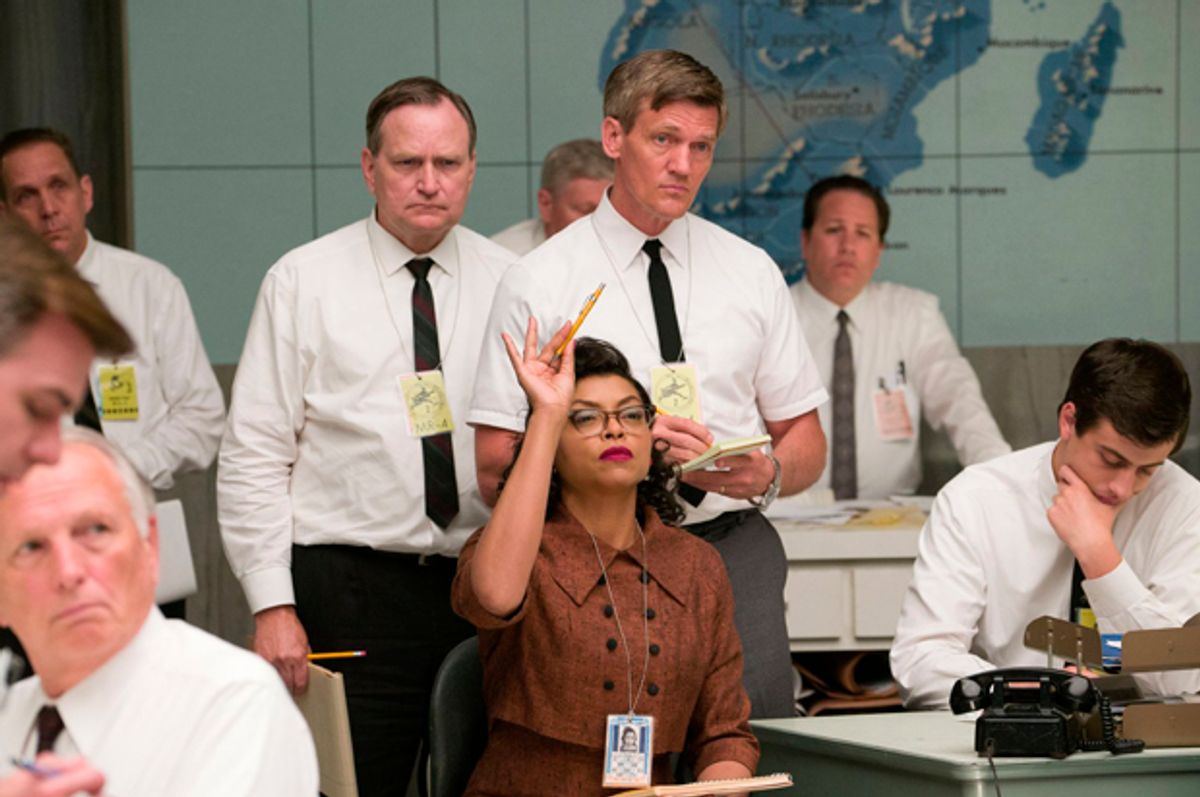 Can you imagine running half a mile in high heels just to go to the bathroom?

The most powerful scene in Theodore Melfi’s “Hidden Figures,” starring Octavia Spencer, Taraji P. Henson and singer Janelle Monae as three black mathematicians overcoming institutional barriers at NASA in the 1960s, powerfully underscores the horror of “separate but equal.” Because of her expertise in analytical geometry, Katherine Goble (Henson) is tapped to work on the mission to launch the Mercury craft Friendship 7 into space; her work on the project is about to make John Glenn (Glen Powell) the first man to orbit the Earth. Gobel, whose genius was apparent since she was very young, does all the calculations by hand.

There is a major impediment, however, to doing her work effectively: Langley Research Center, located in Virginia, doesn’t have a bathroom in the East Campus, the building that houses its space task group. To access the “colored bathroom,” Katherine has to jog back to the west campus, where the black employees work. To get back and forth between the two campuses is a 40-minute hike. She often has to jog in the rain to get there, returning to her desk soaked. The bikes at Langley, which would help ease her daily commute, are available only to men.

For anyone paying attention to the national debate over transgender people's use of bathrooms, that scene will seem awfully familiar. Fifty-five years later, we’re still fighting about the basic dignity of marginalized groups — how trans people are often forced to use facilities that are inconvenient, subpar and even unsafe.

This month Republican legislator Bob Marshall introduced a law in Virginia that would bring North Carolina’s House Bill 2 to his state. The legislation, known as HB1612, would force trans people to use bathrooms that correspond with what's on their “original birth certificate” not the gender they most closely identify with. During a press conference on the bill held last week, Travis Witt, executive director of the right-wing Virginia First Foundation, suggested that the bill could allow for a “third option.”

School administrators would then have the opportunity to provide reasonable accommodation for trans students who request access for facilities consistent with their gender identity.

But the locker rooms and restrooms that might be provided by faculty and staff under such guidelines might  be anything but affirming. Such facilities might be located in the faculty lounge or janitor’s closet, nowhere near students' classes or extracurricular activities. Asking trans students to use them could force individuals to miss class and further stigmatize them.

Daniel, a 17-year-old trans student, told Human Rights Watch that it takes a great deal of planning to use the only gender-neutral bathroom on his school’s campus, which is located in the nurse’s clinic. “It’s 3 minutes to walk to the bathroom, and then I have to pee, and then I have to go back,” Daniel, who lives in Texas, said during an interview with the international advocacy organization. “The teacher is like, where were you, and why were you in the clinic bathroom, and it’s awkward. I don’t pee during school, which is a very bad habit. Because I don’t drink [water] at school, and I’m dehydrated.” Like Daniel, many other students claimed that lacking safe, accessible options at school, they simply didn’t go to the restroom at all.

It’s easy to see why. With the help of the American Civil Liberties Union, Alex Wilson, a 25-year-old trans student who attended a technical college in Clearwater, Florida, filed a lawsuit against her school after she was allegedly forced to do her business in a storage closet. Wilson, who was studying nursing at the time, has claimed that the school had no issue with her use of the women’s facilities until a classmate outed her as transgender to administrators. School staff informed Wilson that if she continued to use the female bathroom, the college would take legal action against her.

These cases are fairly common. Damien Greenlee, a trans student at Columbus High School in Kansas, was blocked from using the men’s or the women’s restroom and instead offered an outdated bathroom with a leaky ceiling and a broken door. Greenlee told Pittsburg’s KOAM TV there are two other facilities but neither is convenient; one is located off-campus a block away, and the other is in the agriculture building, which is on the other side of the school.

Greenlee, who was a junior at the time, explained that this treatment exacerbates his feelings of isolation and alienation — from faculty members and his classmates. “The students don't see me as a person," he said.

What happens when students are forced to use facilities that make them feel “different,” as if being a teenager were not difficult enough already? Research has shown that if trans students decline to go to the restroom and instead opt to wait until they arrive at home, this can lead to long-term health issues, including kidney problems and urinary tract infections. For young people, this can negatively affect their mental health and suicidal ideation and self-harm among trans students is sky high. The Trevor Project has reported that, according to research, 40 percent of transgender youth have seriously considered taking their own life.

Mindy Fabian was forced to change for gym class in the janitor’s closet at Madison West, a high school in Wisconsin. As Milwaukee Magazine has reported, Fabian bounced between schools — looking for a place where she wouldn’t be bullied by other students or have to fight administrations just to do something as minor as use the locker room with other students. “For every reason, I hated myself,” Fabian said during a video message she recorded for a class project.

Students like these will face enormous challenges under the Trump presidency. Although the Obama administration advised schools in May 2016 to let trans youth to use facilities that have designations consistent with their gender identity, Mike Pence, the vice president-elect, has claimed that the incoming administration will undo those protections. In 2009, Betsy DeVos, Trump’s pick for secretary of education, gave $500,000 to the National Organization for Marriage as it sought to pass constitutional amendments barring same-sex marriage in several states.

“Hidden Fences” is an important reminder that separate is never equal — whether it is running to use the only bathroom made available for you or being treated with respect. When Katherine wants to use the coffee pot, no one will touch hers; instead her co-workers set aside a “colored” kettle for her.

In a stirring scene, Katherine’s boss, Al Harrison (Kevin Costner), rips the “colored bathroom” sign off the door — thereby enabling black women to use any restroom they like. Tearing down the color barrier in NASA’s bathrooms not only helped Katherine focus on doing her job effectively, but it also helped Langley’s best and brightest to make history. Fighting for basic dignity resulted in putting a man in space in 1962. Think of what we could do if we broke down those same divides today.