Can progressives make changes in the Trump era?

Things are not looking good for American progressives, who need to create powerful and unified vision 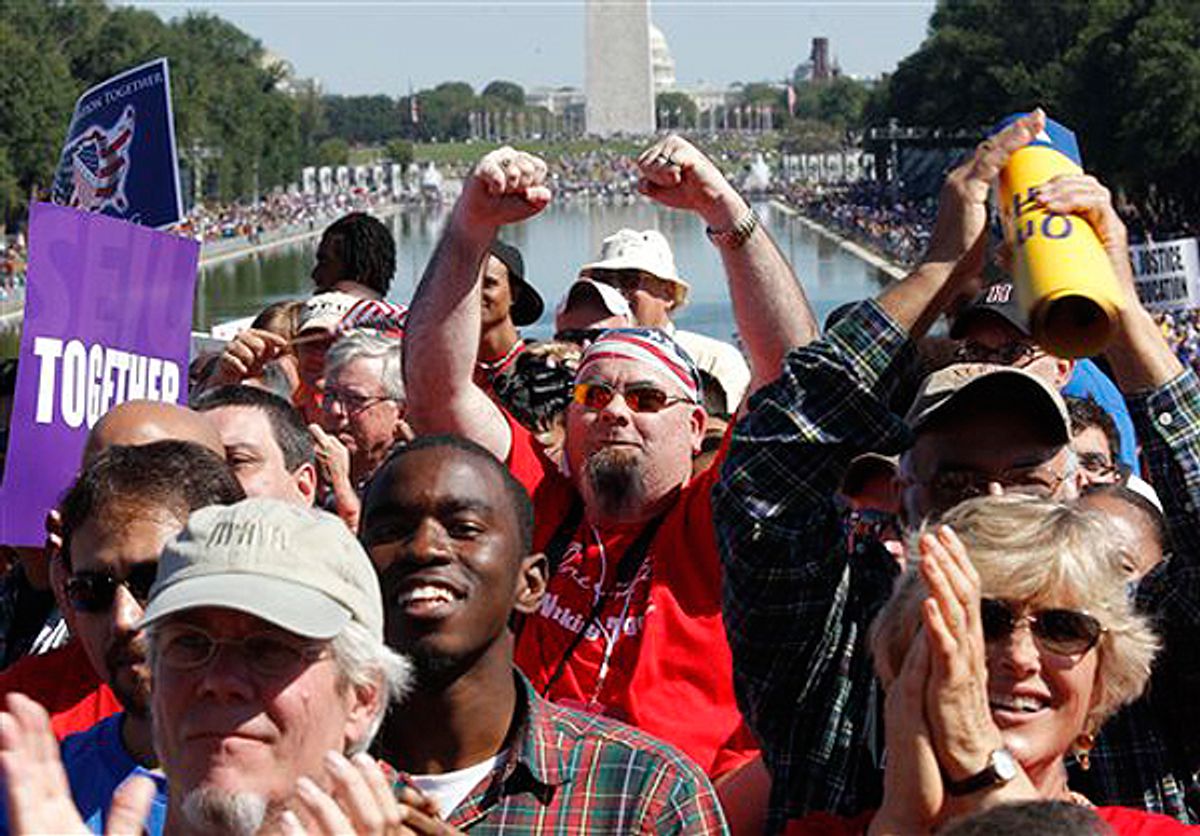 Things are not looking good for American progressives.

President-elect Donald Trump is poised to put in place many regressive policies in his quest to “make America great again” that are fundamentally at odds with what are generally considered progressive values such as transparency, inclusiveness, equity, fairness and dignity for all. Examples include his plans to build a wall on the Mexican border, deport undocumented immigrants or at least immigrants with criminal records, ban or severely restrict Muslims, deny climate change and repeal the Affordable Care Act, as well as his conflicts of interest and possible nepotism.

This situation is a stark reversal from only a few years ago when it seemed progressives were winning the battle of ideas on such issues as marriage equality – thanks to the Supreme Court’s 2014 decision – Wall Street reform and the passage of Obamacare, which extended affordable health insurance to millions of Americans.

Today, this progress appears to be in jeopardy, while other pressing issues such as widening income inequality and climate change desperately need addressing. With both houses of Congress and the White House now in the grip of conservatives – and the Supreme Court about to be steered to the right for potentially many years to come – where do progressives go from here?

My research on how to affect large system change offers some answers. It begins with realizing progressives have a story problem.

Here’s the thing: Conservatives have been remarkably effective at framing the debate and articulating what they stand for, as linguist George Lakoff explains in “The All New Don’t Think of an Elephant.”

For example, the notions of personal responsibility, limited government, free markets and free trade are all deeply embedded in our collective psyches. Along with the maximization of shareholder wealth as the primary purpose of the corporation, these are all key elements of the neoliberal economic agenda established in the ashes of World War II.

While Trump may not adhere to all of these ideas – most notably free trade – they remain core elements of the Republican vision and most of the voters who elected him.

In contrast, progressives have been entirely ineffective at crafting a narrative and can’t seem to agree on a core set of issues, values and supporting memes (in the form of phrases, images, words and symbols). Progressives act like what ecologist L. Hunter Lovins calls a “bucket of crabs.” Crabs, placed in a bucket, are said to fight each other, pulling back down any crab that attempts to escape. Progressives, Lovins argues, do much the same in their otherwise laudable effort to be inclusive, democratic and accepting of multiple perspectives.

Lakoff, who directs the Center for Neural Mind and Society at the University of California at Berkeley, finds that progressives come in at least six different “types,” each with a different focus: socioeconomic themes, identity politics, environmentalism, civil liberties, spiritual renewal and anti-authoritarianism.

Each type thinks its ideas are most important. That’s the bucket of crabs.

The big battles ahead

Problematically for progressives, the battles they face are only getting bigger, more complex and more challenging. Besides protection of the hard-won rights of recent years, unprecedented levels of inequality, the looming threat of climate change and an impending employment crisis are all on the horizon.

Work I’ve done with colleagues on large system change offers two considerations for progressives as they seek to find their footing in the current climate.

First, large system change takes place in a context of complex systems fraught with “wicked problems,” which involve intertwined issues with no obvious beginnings or ends and many stakeholders with different ideas about what the problem actually is, what should be done about it and what it would even mean to “solve” the problem. Climate change, inequality and the jobs crisis all fit this framework.

Sounds like the bucket of crabs, no? In such systems, change can potentially come from many different quarters and numerous actors. By its nature, large system change cannot be controlled or planned as many people might like. Such change becomes particularly difficult when the people in charge, currently conservatives, disagree with the fundamental premises of would-be change agents.

How in this context could progressive change occur?

The second consideration provides an answer: Successful large system change is best guided by a powerful, coherent and compelling narrative or story based on resonant core values and readily transferable memes. Such narratives, values and memes shape attitudes, beliefs and, ultimately, actions and policies. People respond to stories and compelling ideas (memes), not just long-winded policies, because stories not only explain what is happening but also tap into emotions and values.

Of memes and men

In other words, to counteract the forces that would reverse President Barack Obama’s policies to fight climate change or exacerbate income inequality by cutting taxes for the wealthy, progressives need to come together and find ways to clearly articulate what they stand for, while telling a simple and compelling story that shows how their ideas will help shape a better future.

Developing memes is an important part of that process. Memes are core units of culture and can be ideas like “free markets” or “maximize shareholder wealth,” phrases like “Make America great again,” symbols and images such as red baseball caps and pink “pussyhats,” pink hats with cat ears that symbolize resistance to misogyny. Such memes resonate broadly with people because they tap into and connect with their core values. They underpin and support a narrative and the way we relate to each other and the world around us. Their power and importance are frequently overlooked in system change.

Consider the resonance of “Make America great again” combined with the symbolism of red baseball caps. They created a collective identity and identifiable area of agreement among Trump supporters. Contrast that with the considerably less resonant and memorable “Stronger together” and “I’m with her” slogans of the Hillary Clinton campaign.

While it certainly lacks specifics, “Make America great again” sounds meaningful, presumably connects with something identifiable in supporters’ lives and clearly offers a vision of a different future. The vaguer “I’m with her” or “Stronger together” slogans, in contrast, seem to offer little guidance about what the vision is or how to create a meaningful collective identity.

For progressives to succeed, they need to identify the common values, ideas and goals that create common ground, the same way conservatives have used individual responsibility and free markets.

Howard Dean, former governor of Vermont, 2008 Democratic presidential candidate and then chair of the Democratic National Committee, powerfully pointed out in 2007 that people respond to and make choices on the basis of values and resonant supporting memes, not policy papers and positions.

Dean identified fairness, fiscal responsibility and strength/toughness as core progressive values. A group called ThinkProgress adds to the list freedom (e.g., freedom of speech, association and religion, and freedom to have a fulfilling life), opportunity (e.g., preventing discrimination and embracing diversity), responsibility (individual and shared) and cooperation (recognizing our interconnectedness).

In such a progressive context, the story for companies might be that they operate in fair markets (not just free markets) with collective value (not just profitability or shareholder wealth) as a goal.

Or something like that. The Leading for Wellbeing coalition, for example, is an initiative set up by Lovins and others to develop an economy that provides well-being and dignity for all, where businesses work to enhance life in all respects. This kind of shared process of values identification and articulation is clearly needed right now.

Only by building such a powerful and unified vision can progressives continue to push their agenda in the era of Trump and conservative dominance in Washington.