Betsy DeVos' family has contributed to right wing, anti-LGBT causes for years. LGBT kids will not be safe in school 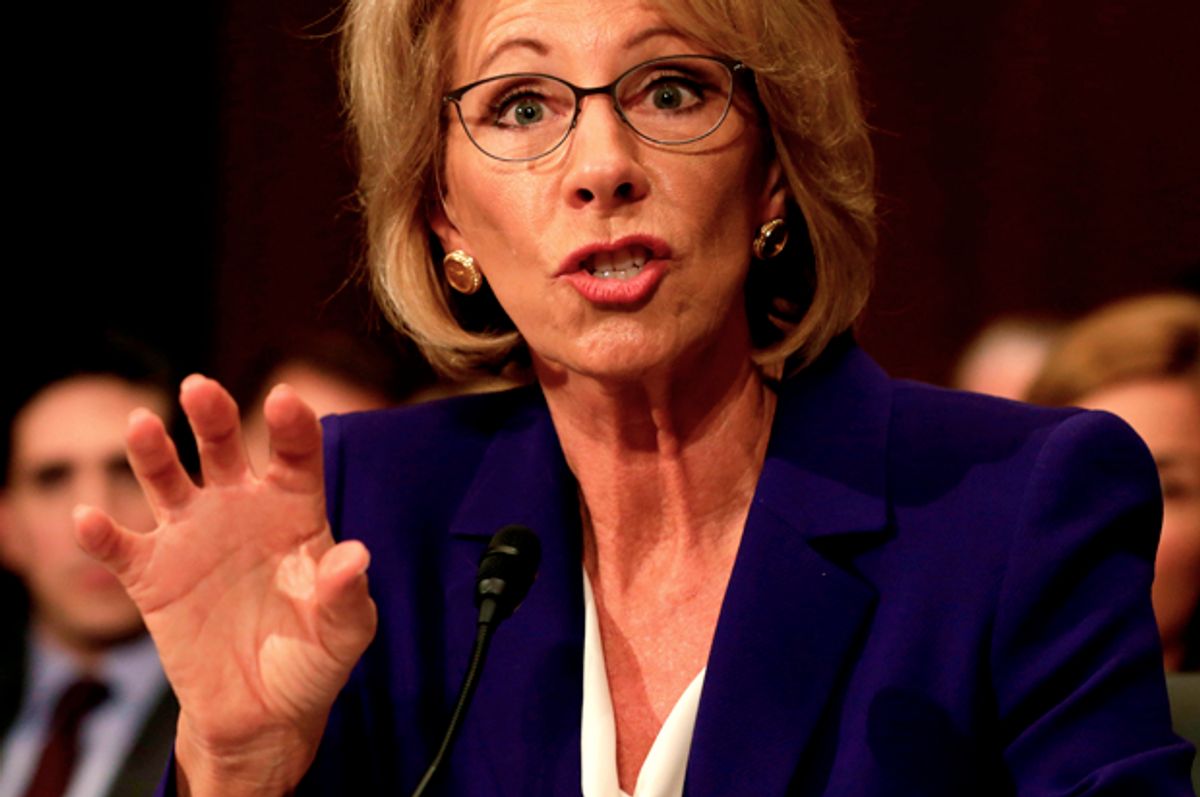 LGBT students have worse things to fear in public school than being attacked by a grizzly bear — and one of those dangers is Betsy DeVos. Donald Trump’s pick for the secretary of the Department of Education made headlines on Wednesday when DeVos said that she would not oppose carrying guns in schools, citing a Wyoming school where firearms are necessary to protect students and faculty from grizzlies.

But who will protect LGBT youth from Betsy DeVos? Although the charter school advocate defended her record on equality during the hearing, saying that she believes in “the innate value of every single human being,” LGBT rights advocates have strong concerns about what her appointment would mean for students around the country.

If appointed to Trump’s Cabinet, DeVos would be able to undo recent protections for trans youth enacted during the Obama administration — which would put the safety and well-being of countless students around the country at risk. In a press release, Mara Keisling of the National Center for Transgender Equality warned of the potential danger to LGBT students posed by DeVos.

“The Secretary of Education must have the interests of all students in mind, and everything we have seen from Betsy DeVos suggests that she will not,” Kiesling said. “The hundreds of thousands of transgender students around the nation deserve better than a Secretary of Education who has donated huge sums of money to organizations that have called transgender people ‘broken.’”

DeVos descends from an anti-LGBT dynasty; she's  member of an extremely powerful family that has donated millions to fight against equality efforts across the country. Her father, Edgar Prince, was one of the co-founders of the Family Research Council, an anti-gay group that believes homosexuality is “harmful” and openly supports the use of conversion therapy to "cure: LGBT youth of their same-sex attractions.

The president of the Family Research Council, Tony Perkins, pushed for the GOP to embrace the discredited practice, which has been condemned by nearly every leading medical group, in its platform at the Republican National Convention. Perkins got his wish. Meanwhile, her father-in-law, Richard DeVos, is a major donor to Focus on the Family, an extreme right-wing group that has spent decades combating LGBT rights.

Betsy DeVos' family, one of the wealthiest in Michigan, has continually put its money where its politics is. According to a letter co-signed by openly gay House representatives Jared Polis, D-Colo., and Sean Mahoney, D-N.Y., the DeVos clan gave $1 million to the Institute for Marriage and Public Policy, an organization that has claimed that repealing the Defense of Marriage Act in 2012 amounted to a gay rights “fatwa.” Family members have also donated more than $13 million to the Heritage Foundation, which has argued that legalizing marriage equality would result in the deaths of 900,000 unborn babies.

During her confirmation hearing  DeVos clarified  that the positions of her family do not reflect her own feelings on LGBT rights, and she is backed by the Log Cabin Republicans, the national gay GOP group.

Pride Source, a Michigan-based LGBT website, claims that DeVos and her husband, Dick DeVos, pushed to add an anti-gay marriage amendment to the ballot in 2004; the successful campaign ended up banning same-sex unions in the state. The couple personally contributed $200,000 of their own money to the effort. DeVos’ husband additionally gave $100,000 to Florida’s Amendment 2 campaign in 2008, yet another successful drive to ban marriage rights for gay people, according to Pride Source.

DeVos also donated to Andrea LaFontaine's campaign for the Michigan House. During her seven years in the state’s legislature, she pushed for legislation designed to  allow adoption agencies to discriminate against same-sex couples based on “sincerely held religious beliefs.” That bill passed in 2015.

On Wednesday DeVos further attempted to distance herself from her anti-LGBT history by claiming she had no role in the Edgar & Elsa Prince Foundation, another organization that has funded efforts to curb equal rights. While she has been listed as the vice president on the group’s tax forms until 2013, DeVos claimed this was merely a “clerical error,” one t being remedied with the state.

Although she has filed a “certificate of correction” to have her name removed from the documents, Sen. Maggie Hassan, D-N.M., who questioned DeVos during the hearing, dismissed DeVos’ assertion that this was a mistake.

“It is hard to believe that Mrs. DeVos could be listed as vice president of the Prince Foundation for 13 years and yet have no involvement with, or knowledge of, the millions of dollars in donations made to anti-LGBTQ groups that promote intolerance,” Hassan, claimed in an email to CNN.  “For Mrs. DeVos to try to explain away these donations by claiming that her title was simply a ‘clerical error’ is concerning, to say the least.”

Given the many questions about her anti-LGBT background, advocacy groups are concerned that DeVos would do little to defend recent guidance from the Department of Education and Department of Justice on protections for trans students.

In 2016, the two agencies penned a “Dear Colleague” letter advising schools to allow transgender youths in kindergarten through grade 12 to use the restroom and locker room facility whose designation most closely matched the gender they identified with. Those suggestions were based in the Obama administration’s interpretation of Title IX of the Education Amendments of 1972, which prohibits discrimination on the basis of sex, race, national origin and religion in places of learning. The office extended its understanding of the law to include gender identity.

Nathan Smith, the CEO of the Gay, Lesbian, and Straight Education Network, told Salon that a problem with the Obama guidance, which was opposed by 11 states, is that it is “not legally binding.”

“What that means is that just because the Department of Education currently under the Obama administration [interprets] Title IX [to mean that] trans students are protected doesn’t mean that’s gone through a formal rulemaking process to where that’s officially recognized as the interpretation,” Smith said. “We are concerned that guidance will be rescinded and that it will be rescinded early in the administration. Betsy DeVos has not expressed any support of the ‘Dear Colleague’ letter.”

Because the Department of Justice had jointly penned the resolution, that agency could serve as a bulwark against amending the current understanding of Title IX. The trouble is, however, that Jeff Sessions — Trump’s pick for attorney general — has shown little indication that he will do anything to protect trans students. Sessions, a Republican senator from Alabama, has fought against every single LGBT issue that has come across his desk. He opposed nondiscrimination protections for LGBT workers and adding sexual orientation and gender identity to national hate crime legislation.

In addition, Vice President-elect Mike Pence — who supported conversion therapy in his 2000 run for Congress — has already claimed that reversing protections for trans students will be the incoming administration's agenda.

“It seems like there’s no significant barrier to her being able to rescind the guidance,” Smith added.

Rachel Tiven, the CEO of Lambda Legal, has said another concern is DeVos’ support for charter schools and voucher programs, which could further undermine the federal government’s ability to act on behalf of trans students. If all kindergarten through grade 12 classrooms in the nation were privatized, for example, it would fully “exempt students from the protections of federal law.” And Tiven said, “That will have direct ramifications for the protection of all students from discrimination, including LGBT students.”

But even without a friend in the Department of Education, a great deal of legal precedent supports equal access for trans students in schools — and it won't disappear with the arrival of a new administration. The upholding of these protections will likely be decided by the Supreme Court, which is set to hear legal arguments this year on G.G. v. Gloucester County School Board. Plaintiff Gavin Grimm, a trans high school student in Gloucester, Virginia, sued his school after being denied access to the restroom he sought to use. He is being represented by the American Civil Liberties Union and the ACLU of Virginia.

In the meantime, 14 states and the District of Columbia still have nondiscrimination laws in place to protect trans students. Groups like GLSEN are working with legislators to pass further laws at the state and local level to ensure that all students can attend school without the fear of being targeted for who they are. Those protections are extremely important. LGBT youth are four times more likely than their heterosexual peers to attempt suicide and most likely to do so in places where they have little legal support.

Tiven, who said she receives dozens of calls every day from trans students worried that they will be subjected to federally mandated conversion therapy under Trump, wants young people to know that organizations like GLSEN and Lambda Legal will keep fighting for them.

“No matter what Mike Pence says,” she said, “it is not open season on trans kids.”