Trump will take office as the most unliked president in four decades, but there's more to the story 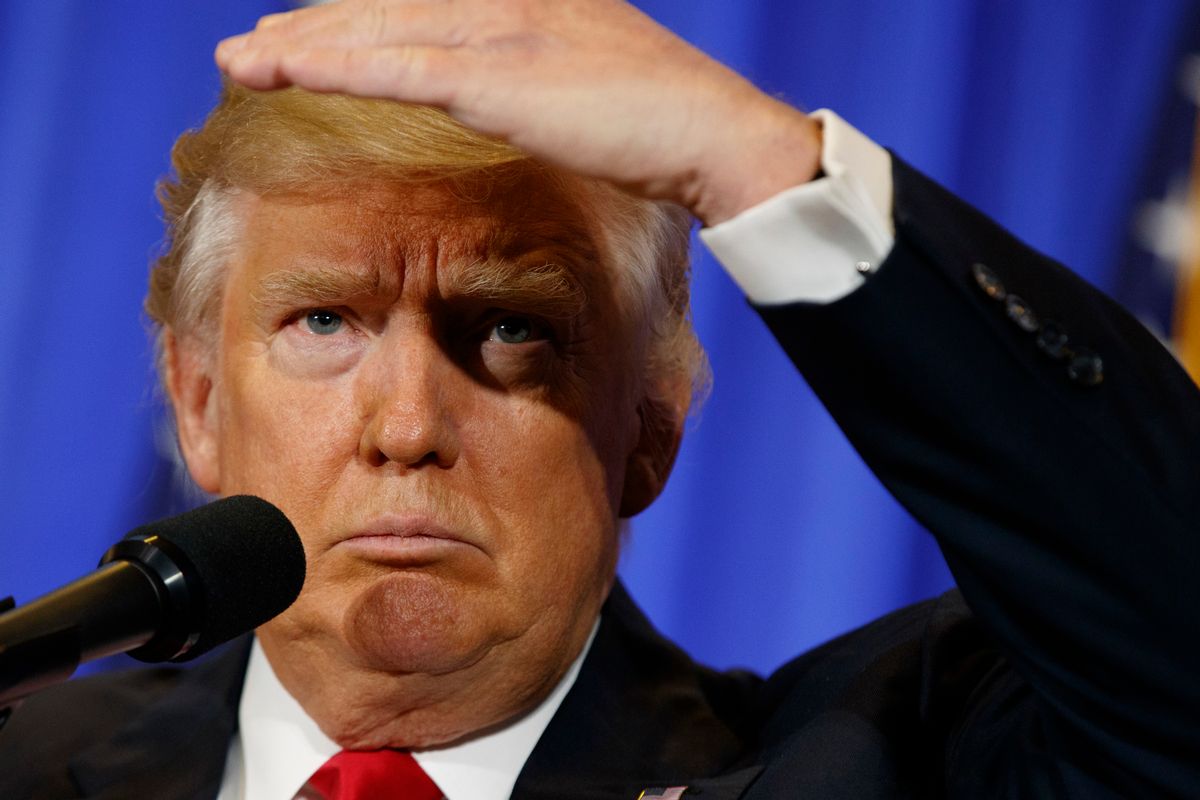 Most of the attention given to a new Washington Post/ABC News poll has centered on the finding that Donald Trump will take office as the most unliked president of the last four decades, making him historically unpopular. The survey finds 54 percent of Americans have an unfavorable view of Trump, while 40 percent view him favorably. Just a day earlier, Gallupreleased almost identical numbers, with Trump’s unfavorable/favorable split at 55/40. Compared to Gallup’s November numbers, Trump’s favorables are on the decline since his election. CNN also found that Trump’s numbers have dropped by 6 points since he beat Hillary Clinton in November, and that his favorables are less than half those of incoming president Obama, which stood at 84 percent at around this time in 2009.

Trump responded to the polls in the most Trumpian way possible: by re-whining the story of how the system is rigged against the racist, misogynist white male trust fund kid-turned-adult billionaire who, despite no previous experience in government or the military, and a lack of coherent policy proposals, was elected president. “The same people who did the phony election polls, and were so wrong, are now doing approval rating polls,” Trump tweeted Tuesday morning. “They are rigged just like before.”

It’s unlikely Trump has really dug into the numbers, which show it’s not just about popularity. Americans overwhelmingly think poorly of Trump on a whole host of issues. Here are 4 interesting findings from the Washington Post/ABC Survey.

1. White people are the only group that have a favorable view of Trump at anything near 50 percent.

Trump spent the long Martin Luther King weekend tweeting racialized insults at civil rights icon John Lewis, who was marching and getting mercilessly beaten by racist cops while Trump was racking up Vietnam deferments because his feet hurt just until the moment the war ended. That was fully in character with the guy whose entire presidential run was launched by assuming the role of Birther-in-Chief, and who spent 18 months co-signing his angry followers’ ludicrous belief that Muslims, blacks and immigrants are stealing a country that rightfully belongs to them. It follows that just 17 percent of African Americans, 24 percent of Hispanics and 21 percent non-whites polled overall rated Trump favorably. In contrast, a whole 50 percent of whites polled think Trump is pretty cool.

2. Most Americans think Trump is unqualified to be president.

Fifty-two percent of respondents to the WaPo-ABC poll responded in the negative to the question, “Do you think Donald Trump is qualified to serve as president, or not?” As with a lot of the questions, divides are most glaringly observed along lines of party affiliation, race, and class. A whopping 90 percentof conservative Republicans said they think Trump is fully prepared to take on the task ahead of him, which only proves their ability to overlook every egregious failing a president can make unless he (and yes, emphasis on “he”) is black. Just 21 percent of Democrats agreed. White evangelical protestants, a segment that worships a lord and savior who apparently wanted a man who brags about sexual assault to be president, have the most faith among white religious groups. Seventy-five percent stated Trump is qualified for his new job.

3. Three-quarters of Americans want Trump to release his taxes.

Last week, after waiting long enough to ensure there wouldn’t be enough time for him to respond to all the questions begging answers, Trump finally held a press conference. Between attacks on the media and con games about his business conflicts, he insisted that “the only one[s] that care about my tax returns are the reporters.” Today, we are all reporters, I guess. Or at least the near 75 percent of us who want to see whatever Russian shenanigans and account overdrafts he’s hiding in those tax documents.

Most Americans, 65 percent, believe the 17 intelligence agencies that report Russia hacked the DNC. No one reason got a majority of votes, but the largest of respondents, 45 percent, believe the cyberespionage was undertaken to help Trump beat Hillary Clinton. This bodes poorly for that huge back tattoo Trump has that reads, “It Coulda Been China.”