Trump's attack on a civil rights hero was outrageous; it was also another media spectacle meant to distract us 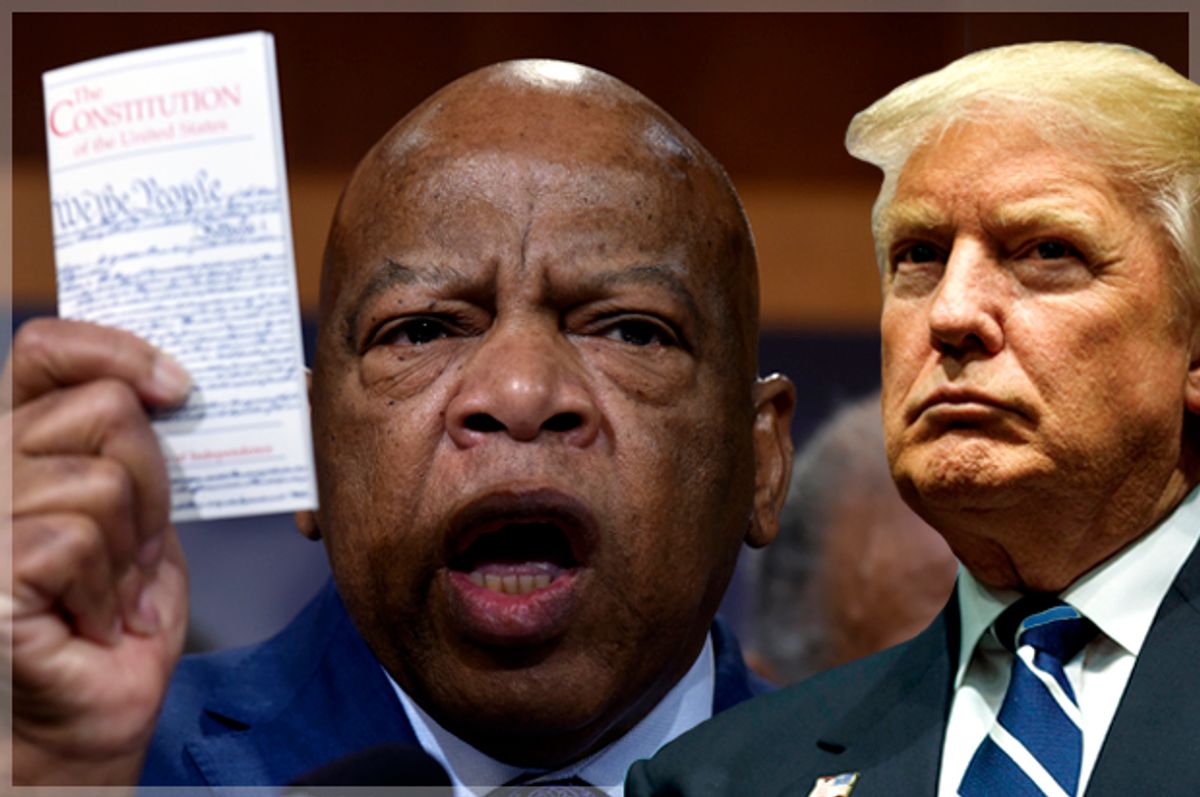 During an interview with Chuck Todd on NBC's "Meet the Press," Rep. John Lewis of Georgia, the venerable hero of the civil rights movement, announced that he would not be attending Trump's inauguration. Lewis explained:

I don’t see this president-elect as a legitimate president. . . . I think the Russians participated in helping this man get elected. And they helped destroy the candidacy of Hillary Clinton.

In response, Donald Trump used Twitter to issue the following rebuttal and characteristic barrage of insults:

Congressman John Lewis should spend more time on fixing and helping his district, which is in horrible shape and falling apart (not to mention crime infested) rather than falsely complaining about the election results. All talk, talk, talk - no action or results. Sad!

Congressman John Lewis should finally focus on the burning and crime infested inner-cities of the U.S. I can use all the help I can get!

Trump's claims are, as usual, ridiculous. Moreover, they are but one more example of how fascist authoritarians attempt to twist reality to their will.

John Lewis suffered grievous physical injuries while marching with Dr. Martin Luther King Jr. in the 1960s. After his work as a pioneer of the civil rights movement, Lewis remained committed to a life of public service and activism.

Despite Trump's racist slurs to the contrary, all black and brown communities are not dystopian hellscapes. Lewis' district is affluent and contains several of the leading universities in the United States.

As expected, Trump's critics used this latest controversy to highlight the president-elect's shortcomings and his unfitness for office. Lewis' stand against Donald Trump has encouraged other Democratic members of Congress to boycott Friday's inauguration. Some observers have even suggested that Trump's attack has served to anoint John Lewis as the de facto moral leader of the growing people's movement against the incoming president.

Unfortunately, this wave of condemnation, principle, righteous anger and disgust at Donald Trump's attack on a civil rights hero — on the weekend before Martin Luther King Jr. Day, no less — will in all likelihood not damage or hurt the incoming president's popularity.

Trump's voters will continue to support him: He was elected largely because of white racial resentment. His supporters believe that white people are "victims" of "reverse racism" in America, and insulting a black American hero is an act of ugly defiance against the so-called bogeyman of "political correctness" that Trump-thuglicans are so obsessed with.

One should not overlook how many of the white bigots who assaulted John Lewis and the other freedom fighters of the 1960s are still alive — and the overwhelming majority of them likely voted for Donald Trump.

The outrage about Trump's attempt to lecture and insult Lewis is essentially a distraction from other more critical matters — concerns that Lewis highlighted in his explanation for why he will not attend Trump's coronation.

The last few days and weeks have brought a series of confirmation hearings for Trump's nominees that further demonstrate how the latter are, at best, incompetent or, at worst, dedicated to destroy the very agencies they would be tasked with leading. Some of Trump's nominees. such as secretary of state-designate Rex Tillerson and health and human services secretary-designate Tom Price, have serious conflicts of financial interest in relative to the agencies they would lead.

There is additional evidence that President-elect Trump may be susceptible to blackmail or manipulation by Russia's intelligence agencies because of compromising financial and personal information in their possession.

James Comey, director of the FBI, chose to not make a public announcement about whether members of Trump's staff were being actively investigated for their ties to Russia. No such scruples prevented him from sharing information about Hillary Clinton and the faux email "scandal" — a decision that likely swayed the election in Trump's favor.

Marine Le Pen, leader of the far-right French National Front, recently attended a meeting at Trump Tower. This meeting is part of a broader pattern: Trump's representatives have been in contact with several right-wing extremist organizations in Europe, including groups with neo-Nazi and white nationalist affiliations.

Trump continues to disparage and undermine the American intelligence community and their findings about Russian interference in the 2016 election, while making public statements of support and praise for Russian President Vladimir Putin.

In total, Trump has continued to exhibit behavior of a person who is actively working to advance the interests of a foreign power at the expense of his own country.

Ultimately, the media and the public's obsession with Trump's exhalations on Twitter is precisely what cognitive linguist George Lakoff warned against in a recent interview with Salon:

The second use of [Trump's] tweets is diversion. When something important is coming up, like the question of whether he is going to use a blind trust, the conflicts of interest. So what does he do instead? He attacks Meryl Streep. And then they talk about Meryl Streep for a couple of days. That’s a diversion.

Outrage at Donald Trump is also part of a deeper psychological and emotional dynamic. For The Point, Kathryn Lofton explained:

Staying shocked at the Donald keeps us all in it, eroticized by our own disgust. What a drag it would be to cease being shocked by his ascendancy, and pursue instead an explanation of how we contributed to it, contributed to it by our very knowing: mine, theirs, ours. . . .

In her recent excellent account of Trump supporters in West Virginia, Larissa MacFarquhar goes further, saying that when Trump’s enemies criticize him for his gaffes, this pushes his followers to him. As one of her informants says, “When [voters] see that the media elite is driven out of their mind at the success of Donald Trump it makes them want to root for him. It’s like giving the middle finger to the rest of the country.” The offense of the media elite at Trump shows that their secularism has specific rules of engagement, and Trump is in violation of them. Yet they also need his offensive behavior in order to demonstrate their reason: to show again what they know relative to what he doesn’t. . . . Observing that Trump voters might be less educated than Clinton voters may seem to many to be a simple sociological observation. But for Trump voters, this is akin to telling a Biblical literalist that the text called the Bible is an amalgamation of a vast number of texts assembled by human editors and written by human authors.

Those who oppose Donald Trump and the threat to American democracy he represents would be wise to manage their energy and selectively choose their battles. This may involve a disturbing revelation: You cannot shame the shameless. By implication, you cannot shame Donald Trump or his hard-core supporters.

Trump's presidency will feature (seemingly) childish pronouncements on Twitter, a concerted campaign of lying and disinformation by his spokespeople and the right-wing news media, and threats of violence and intimidation from his supporters. This is an effort by the "Great Leader" to condition the public to his moods with the goal of creating a condition of fear, anxiety, confusion and vulnerability. Such a strategy is also a feature of authoritarian regimes.

The American people must not surrender to such a political feedback loop. Resistance in this moment must involve careful long-term planning and organizing. We cannot afford to be sidetracked or distracted by every ludicrous pronouncement of our Wormtongue-like president.