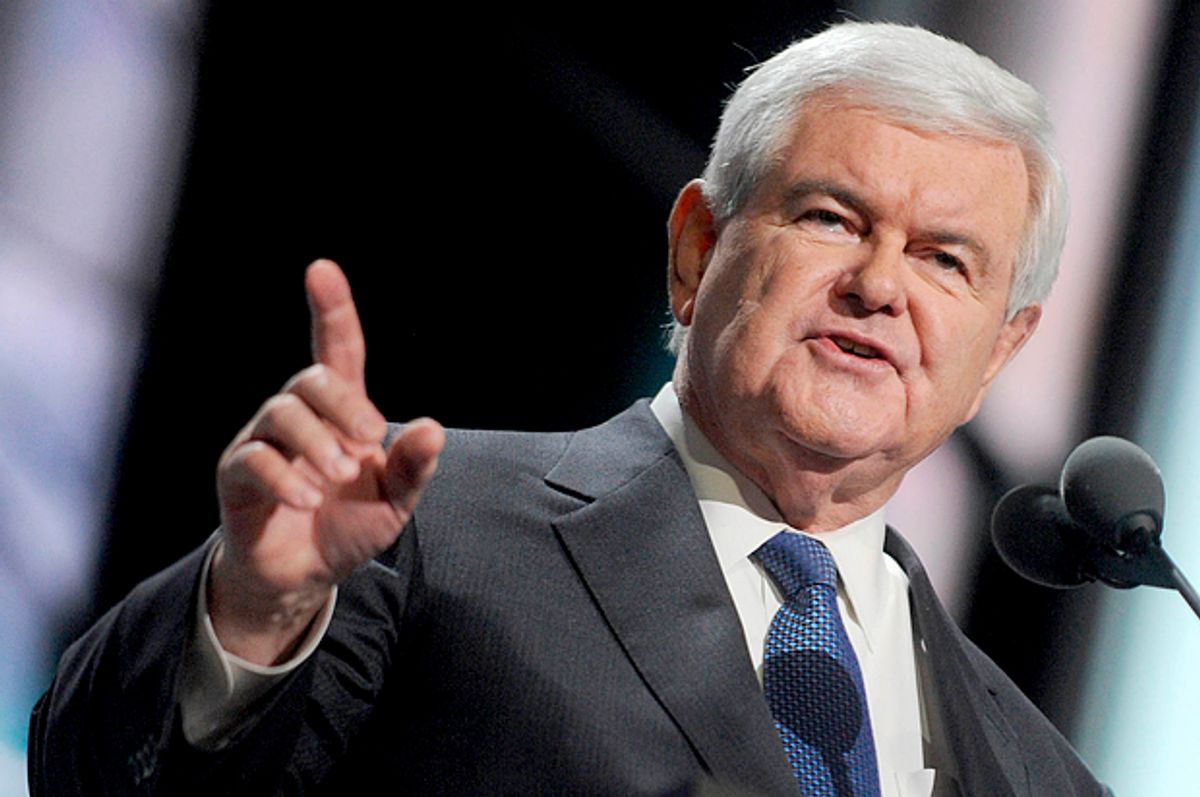 President-elect Donald Trump is set to assume control of the White House in a manner of hours, and his longtime adviser Newt Gingrich is giddy about reported plans to cut $10.5 trillion out of the federal government over 10 years by gutting federal agency budgets by as much as 10 percent while slashing 20 percent from the federal workforce.

The Trump transition team has reportedly met for months with career officials in the White House to outline a plan for massive cuts to the federal workforce. The plan, modeled after a budget championed by the ultra-conservative Heritage Foundation, essentially calls for cutting nearly all of the government’s discretionary spending.

Former House Speaker Newt Gingrich is so excited by the prospects that Trump will finally be able to deliver the extremely right-wing restructuring of the federal government he's championed for decades.

“I would say by one week after the inaugural, it will be very interesting to look at how many things have changed,” Gingrich recently said at a Heritage Foundation event. Gingrich predicted that "Trumpism produces a balanced budget largely as a consequence of its policies rather than by focusing on the balance itself.”

The only risk, Gingrich later noted to the New York Times, is that entering the White House and instantly slashing a federal agency’s permanent staff will likely lead employees "to find ways to sabotage each new cabinet secretary as soon as they walk through the door.”

Offering perhaps the most nakedly political argument for firing federal employees, Gingrich said, “all those bureaucrats overwhelmingly voted for Clinton. There won’t be any real cooperation until we change federal law so we can fire them.”

African-Americans account for nearly 20 percent of the overall federal workforce -- a proportion larger than their population size of 13 percent. Gingrich's cynical political play is likely very cognizant of this fact. After all, only two (and a half, when counting the Maine split) states out of the 20 most dependent on federal funding did not vote for Trump.

Gingrich's vengeful suggestion comes days after he released an open letter calling for the abolishment of the Congressional Budget Office.

“The Congressional Budget Office (CBO) is simply incompatible with the Trump era,” Gingrich wrote, arguing that “it is a left-wing, corrupt, bureaucratic defender of big government and liberalism.”

Gingrich complained that the only independent scorekeeper of congressional and executive budgets "is the opposite of [Trump's] commitments" to Make America Great Again.

Since the Congressional Budget and Impoundment Control Act created it in 1974, CBO has been the most legitimate and successful part of the federal budget process.

Led by Speaker Gingrich, Republicans in Congress applauded the CBO and its then Democratic director during the Clinton administration when its analysis determined that the president’s proposed health care plan would balloon the deficit.

Now, Gingrich says the CBO's "scoring of Obamacare was not just wrong, it was clearly corrupt":

CBO literally brought in the architect of Obamacare to be the adviser on scoring the very Obamacare legislation that he helped write. The score was a lie. It was so wrong it was totally indefensible. A year later the CBO produced a new score that was so much more expensive that it was clear Obamacare would have been defeated if it had been the original score.”