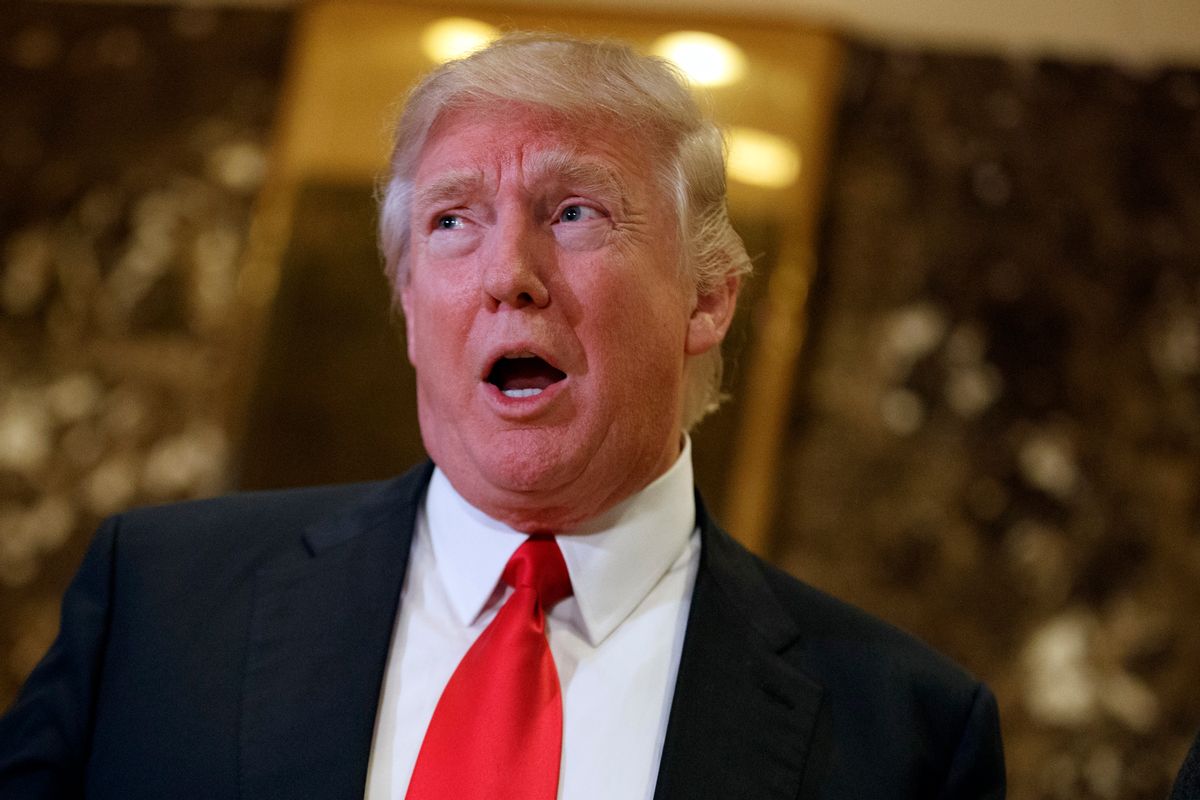 In this Jan. 13, 2017, photo, President-elect Donald Trump speaks with reporters in the lobby of Trump Tower in New York. Trump’s meetings this week with CEOs seeking federal approval for major mergers are raising red flags for ethics lawyers concerned that about the possible erosion of a firewall between the regulators tasked with approving the billion-dollar deals and the White House. (AP Photo/Evan Vucci) (AP)
--

The FBI is leading a multi-agency investigation into possible links between Russian officials and President-elect Donald Trump.

The bureau will be joined by the CIA, National Security Agency, and the Treasury Department's financial crimes unit, according to The New York Times on Thursday. They will reportedly be looking into intercepted communications and financial transactions involving Paul Manafort, Trump's former campaign chairman; Carter Page, a former Trump foreign policy adviser; and Roger Stone, a Republican political operative and Trump confidante. One official told the Times that intelligence reports based on some of the wiretapped communications were provided to the White House.

The report did not say whether Trump himself or his presidential campaign have been directly implicated in these investigations or whether they involve the alleged Russian hacking of the Democratic National Committee. All that is known for sure is that they at least partially encompass Trump's past business dealings with Russia, as well as Manafort's previous work in both Russia and Ukraine (when the latter state was controlled by a Putin puppet). Sources also told the Times that some of Manafort's contacts were under surveillance by the National Security Agency because of possible links to Russia's Federal Security Service, the successor to the infamous KGB.

The legal standards for opening one of these investigations are not very high, and as a result prosecutions are uncommon. Because Trump will soon oversee the agencies conducting these efforts, he will have the power to hinder or even outright squelch them.

"We have absolutely no knowledge of any investigation or even a basis for such an investigation," said Trump spokeswoman Hope Hicks. Manafort was even more defiant, emailing the Times on Thursday evening that claims he had interacted with the Russian government were a "Democrat Party dirty trick and completely false."

There are numerous connections between Trump and Russia that are beyond dispute. It is a fact that Manafort worked for pro-Putin politicians in Ukraine (his denials notwithstanding), that Trump advisers like Rex Tillerson and retired Lt. Gen. Michael Flynn are also connected to Putin, that Trump took little interest in the Republican Party platform except to make sure that it wasn't too harsh on Russia, that he openly encouraged Russia to hack Clinton's emails, and that he had to turn to Russian financial interests tied to the Putin regime to fund his business ventures when major banks stopped lending him money.

That said, if the FBI has been aware of these investigations since before October, it will raise serious questions about why FBI Director James Comey didn't disclose them to the public when he did choose to disclose a warrant into Hillary Clinton's emails, which were ultimately about "nothing at all."