Weapons in the interagency wars include leaks, threats of prosecution and bureaucratic sleight of hand 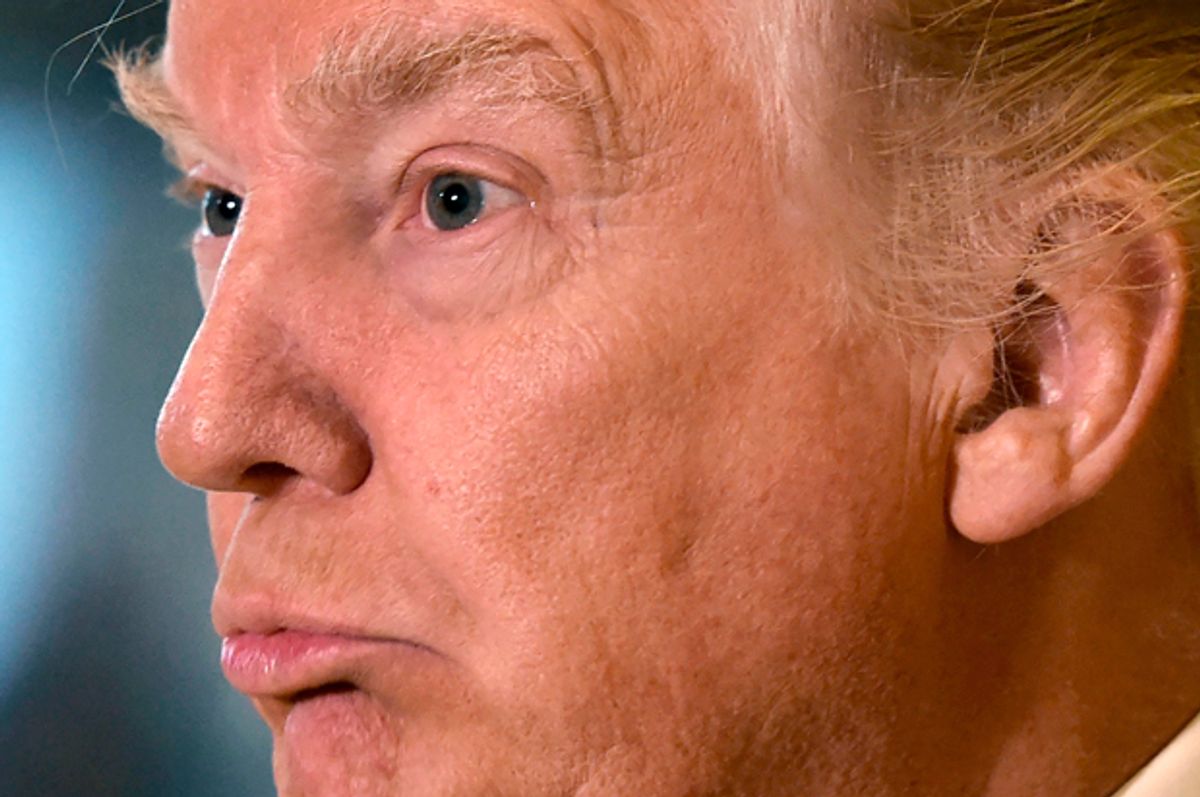 “You take on the intelligence community and they have six ways from Sunday of getting back at you,” said Senate Minority leader Chuck Schumer to Rachel Maddow last weekend. “So even for a practical, supposedly hard-nosed businessman, he’s being really dumb to do this.”

Schumer’s candid comment was a rare admission of how things really work in Washington. If a president crosses a powerful agency, that agency’s officials may fight back with a diverse playbook of "off-the-record" tactics. Weapons in the interagency wars include leaks, threats of prosecution, bureaucratic sleight of hand, and “slow-walking” urgent directives.

(One would have to be, in Schumer’s words, “really dumb” to dismiss the more sinister possibilities—violence, black bag burglaries, and blackmail—but they occur far more often in Hollywood screenplays than in Washington reality.)

The point is that Schumer, like Trump, has abandoned the usual discretion surrounding the politics of the CIA in Washington. The norms that have governed the CIA-White House relationship for decades have evaporated, laying bare a clash between clandestine service and the commander in chief that is unprecedented in the 60-year history of the agency.

“The relationship is the worst of any incoming administration ever,” said Paul Pillar, a former senior CIA official, in an interview with AlterNet. “You have to go back to Nixon to find a president with as strong negative views about the agency. But the agency did not get this kind of public disparagement from Nixon.”

The increasingly naked power struggle pits the incoming president who shows little respect for the traditions of the CIA-White House relationship and a $15 billion-a-year agency that depends on those traditions for its global influence and power.

What Trump will actually do is anyone’s guess. Trump’s nominee for CIA director, Mike Pompeo, is a West Point graduate and Republican congressman from Kansas who favored conspiratorial interpretations of the Benghazi terror attack that were, to put it politely, unfounded in fact. (Pompeo admitted to the Daily Beast he had no "smoking gun proof" that Hillary Clinton was to blame.)

At his Senate confirmation hearings last week, Pompeo did not echo his boss’s disdain for the Agency. Indeed he seemed to go out of his way to affirm current CIA positions on torture (forbidden) and Russia (a threat) that conflict with Trump’s statements.

No surprise there. One of the un-sinister ways the CIA prevails in power struggles is to win over its adversaries with insider knowledge.

After President John F. Kennedy became disenchanted with the agency’s failed operation to overthrow Fidel Castro in Cuba in 1961, he assigned his brother Attorney General Robert Kennedy to ride herd on the agency. After a series of secret briefings, RFK became an enthusiastic supporter of the Agency’s secret operations in 1962 and 1963.

Perhaps the CIA leadership can win over Pompeo and Trump. Timely intelligence in a crisis can do wonders for a bad relationship. President Lyndon Johnson shut the CIA out of his deliberations for his first two and half years in office. Like Trump, LBJ saw Langley as a nest of nefarious liberals out to undo him. After the CIA delivered a prescient forecast about the Israeli-Arab war of June 1967, Johnson lunched weekly with director Dick Helms for the rest of his term.

Trump may seek to diminish the CIA by reorganizing the intelligence community. More than a few people in Washington think the current position of Director of National Intelligence, which supposedly oversees the work of the CIA and 16 U.S. intelligence agencies, should either be strengthened or abolished. But when transition officials floated the reorganization idea, Trump press secretary Sean Spicer said "these reports are false."

What seems certain is that the Trump-CIA struggle will continue both publicly and privately. On Sunday, outgoing CIA director John Brennan warned Trump about the folly of ignoring the agency’s work. Trump responded with another Twitter blast, accusing Brennan of leaking the wholly unverified dossier claiming Russia has compromising information on the president-elect.

As first reported by the Washington Post’s David Ignatius, Flynn called Sergey Kislyak, Russian ambassador to the U.S., on December 29, the day President Obama announced sanctions on Russia for its alleged interference in the 2016 campaign.

The veracity of the leak was confirmed when the Trump transition team hastened to tell Ignatius that Flynn and Kislyak had spoken that day, but not about sanctions.

The day after Flynn and Kislyak chatted, Putin announced he would not retaliate, prompting Trump to tweet, "Great move on delay (by V.Putin). I always knew he was very smart!"

Last Friday, another shoe quietly dropped. From the Reuters bureau in Washington, Jonathan Landay and Arshad Mohammed reported that three unnamed sources had told them Flynn had not one but five phone conversations with Kislyak on December 29. They noted:

The calls raised fresh questions among some U.S. officials about contacts between Trump's advisers and Russian officials at a time when U.S. intelligence agencies contend that Moscow waged a multifaceted campaign of hacking and other actions to boost Republican Trump's election chances against Democrat Hillary Clinton.

The Reuters story has not been independently confirmed. But I don’t see reason to assume the Reuters reporters are pawns in a Clintonian game to blame her election loss on the Russians and stoke a new Cold War. Of course, reporters can be manipulated by unnamed sources. In this case, I find it more noteworthy that the Trump transition team did not comment on, or even deny their reporting.

Landay and Mohammed’s sources made clear to Reuters that they did not know the nature of Flynn’s conversations, only the fact that they occurred. That could indicate that they knew about the calls from electronic surveillance records. Of course, it would be illegal to share such classified information with someone who was not authorized to receive it. But illegal leaks are the norm for the power struggles in Washington. (Only dissidents who seek to intervene in such power struggles from outside Washington—think Dan Ellsberg, Ed Snowden and Chelsea Manning—are likely to face prosecution for such violations of the law. Independent reporters working for big news organizations—think James Risenand James Rosen—may face legal harassment but not charges.)

Suffice it to say, the Reuters leaks came from enemies of Flynn, and perhaps from the CIA (where Ignatius seems to be well-sourced) and they are at least partially confirmed.

The leaks to thePostand Reuters are rather more important than the invective in Trump’s Twitter feed. They point us, like a GPS, to the terrain of the emerging Trump-CIA battle: pre-election contacts between Trump's advisers and Russian officials. Expect more leaks on that subject in coming weeks.

Just as the norms of CIA conduct have been overwhelmed by Trump’s hostility, so has traditional debate about the CIA.

As Trump has dumped on the agency, some once-critical Democrats have hastened to embrace the agency with a gusto that is ahistorical and embarrassing, as Slate pointed out.

At the same time, Glenn Greenwald and leftist critics have denounced CIA leaks against Trump as the work of an untrustworthy runaway agency out to undermine the elected-president. Like Trump, these critics invoke the CIA’s erroneous reporting on Iraqi WMD in 2002 as reason to discount the CIA’s reporting on Trump and Russia in 2017.

“That’s inane,” responded Pillar, a 28-year-veteran of the agency who became a critic of Bush administration Middle East policy. “There have always been intelligence successes and intelligence failures. There’s no reason to cite one failure and not other successes. You could just as well talk about the agency’s gloomy reporting on what would happen in Iraq after the invasion, which turned out to be pretty accurate.”

What sometimes gets confused in the discussion of Trump and the CIA are two different but related issues.

Is the CIA a law-breaking agency with an undemocratic history? And: do the president and U.S. policymakers need an intelligence service to deliver timely and accurate information on which to base their decisions?

The answer to both questions, in my opinion, is yes.

Whether an ignorant president or a runaway CIA is the greater danger to American democracy will be a central issue of the Trump presidency.

On the issue of intelligence reporting, Pillar sees two dangers in Trump’s disdain.

“The first is that the president is not availing himself of information and analysis in the decisions he makes, meaning his positions will be less well informed,” Pillar said.

“Another is that the president will not be sensitized to problems that are not on our plate right now but that, in the judgment of the intelligence community, he and his subordinates will have to do deal with next year,” Pillar said.

Pillar cited the CIA’s pre-9/11 reporting on al-Qaeda leading up to the August 6, 2001 presidential daily briefing warning with its famous title, "Bin-Laden Determined to Strike in US."

A president less disdainful of the CIA than Trump ignored the warning and the country paid a high price.

Such a mistake on Trump's watch may be the biggest threat to American democracy.