Trump's picks to head OMB and the Commerce Dept. have both run into ethical issues regarding their housekeepers 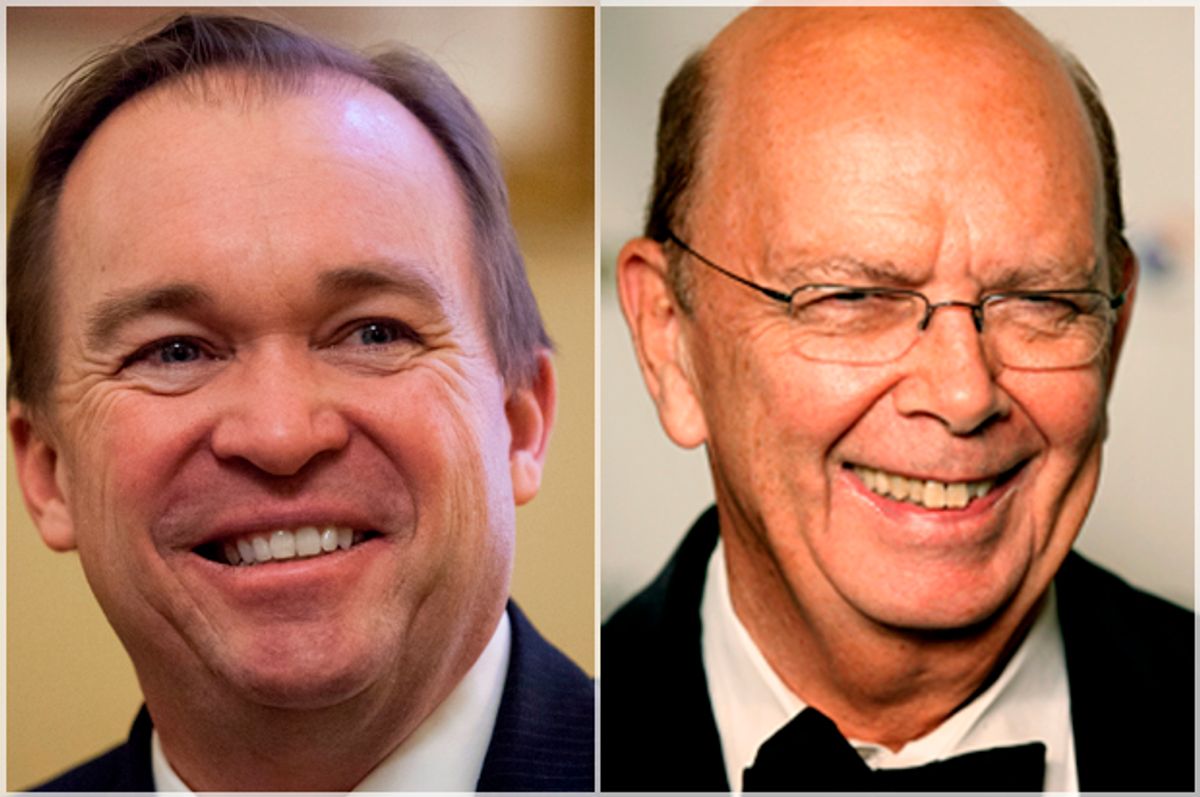 It is becoming painfully obvious that Donald Trump's early decision to forego extensive reviews of his Cabinet nominees in favor of "gut instinct and his chemistry with people" is coming back to haunt him. This week, at least three of President-elect Donald Trump's Cabinet nominees have revealed ethical issues similar to those that have derailed the nominations of previous picks put forth by other presidents.

During his Senate confirmation hearings for Department of Commerce, nominee Wilbur Ross admitted that he fired an undocumented worker who served in his home for seven years shortly after being nominated by Trump. The billionaire private equity investor opened his confirmation hearing before the Senate Commerce Committee Wednesday by admitting that one of his “dozen or so” household workers was an undocumented immigrant. Ross stated that he fired the employee after finding out their status in December.

Ross isn't the first nominee to admit to employing undocumented immigrants. President George W. Bush nominated Linda Chavez to head the Department of Labor in 2001, but she was forced to withdraw after it was revealed she had sheltered an undocumented woman from Guatemala in the 1990s who was trying to escape an abusive relationship.

Ross was able to avoid the full wrath of Democrats on the committee, however, by preemptively agreeing to largely sell off a huge portion of his assets to avoid conflicts of interest.

Sen. Richard Blumenthal, D-Connecticut, said he was impressed by Ross' decision. "I don't want to embarrass you or presume, but of all the billions of dollars in holdings that you own now, you have divested more than 90 percent," Blumenthal said. "You have resigned from 50 positions. The process has been enormously complex and challenging and costly to you personally."

The senator's follow-up question: "You were able to do it — why not the president?"

But Ross wasn’t the only Trump Cabinet appointee to discover potential problems with his personal payroll during the confirmation review process.

Rep. Mick Mulvaney, Trump's choice to run the White House budget office, failed to pay more than $15,000 in federal payroll taxes for a babysitter who cared for his triplets, he told the Senate Budget Committee.

“I have come to learn, during the confirmation review process, that I failed to pay FICA and federal and state unemployment taxes on a household employee for the years 2000-2004,” Mulvaney wrote in a section of a questionnaire, obtained by Salon. “Upon discovery of that shortfall, I paid the federal taxes.”

Yet Mulvaney's failed to pay taxes five years in a row. He explained that the amount he owed and has since paid in federal Social Security, Medicare and unemployment taxes was $15,583, not including to-be-determined penalties and interest. Mulvaney said the amount owed in state taxes has also not been determined yet.

“When other previous cabinet nominees failed to pay their fair share in taxes, Senate Republicans forced those nominees to withdraw from consideration,” Democratic Leader Charles Schumer said in a statement. “If failure to pay taxes was disqualifying for Democratic nominees, then the same should be true for Republican nominees.”

Former Senate Majority Leader Tom Daschle, Barack Obama's first pick for Health and Human Services secretary, withdrew his nomination in February 2009 after disclosing that he had paid about $140,000 in back taxes.

Republican Senator John Cornyn of Texas, who is now the second-ranking Republican in the Senate, said at the time that he would not support Daschle’s nomination, calling his tax issue “a little too much to swallow.”

But speaking to reporters on Wednesday, Cornyn downplayed Mulvaney's lapse as a Democratic attempt to delegitimatize Trump.
"I'm sure they'll try to grab for every straw they can to delay the President-elect's Cabinet," Cornyn said. "Don't get me wrong, I think there should be a thorough vetting, and people should have to answer all the hard questions. But delay for delay's sake should be unacceptable."

For their part, Democrats are already using Mulvaney's failure to pay taxes as a way to highlight GOP hypocrisy on Trump's Cabinet.

"If failure to pay taxes was disqualifying for Democratic nominees, then the same should be true for Republican nominees," Schumer told reporters Wednesday after learning of Mulvaney's tax revelation. “What’s good for the goose is good for the gander.”

The second most senior Republican on the Budget Committee, Sen. Chuck Grassley of Iowa, admitted on Thursday morning that Mulvaney's tax issues "could create problems."

But Trump isn’t backing down from his pick. “President-elect Trump fully stands behind Rep. Mulvaney and looks forward to his efforts to help make America great again,” said Trump transition official John Czwartacki in a statement.“The fact of the matter is that nobody is more qualified and more prepared to fight to rein in Washington spending and fight for taxpayers than Mick Mulvaney." The transition team said Mulvaney had hired a woman to help take care of his newborn triplets and “believed she was responsible for paying all applicable federal and state taxes.”

Mulvaney, a charter member of the radical House Freedom Caucus who rode to power in the 2010 Tea Party wave, is set to take over a key post that will have a hand in every major item on Trump’s agenda. The U.S. Office of Management and Budget (OMB) coordinates the president's legislative proposals and policies, proposes and implements the federal budget, oversees executive branch departments and agencies as well as federal procurement, manages the regulatory process and implements executive orders.

The tea party conservative, a leading deficit hawk in Congress, held the full faith and credit of the United States hostage in 2011 by threatening the American people with national default and economic ruin. Mulvaney even went so far as to publicly deny the potentially cataclysmic economic impacts of failing to raise the debt ceiling. Two years later, he played a key role in the 2013 government shutdown and debt ceiling hostage crisis, defending both as "good policy" and "good politics." The South Carolina Republican was also one of several Red State congressmen who worked to block a $51 billion relief package for the victims of Hurricane Sandy.

Republicans will be able to confirm Mulvaney on a straight party-line vote.

Both Republican Senators from South Carolina remained committed to Mulvaney even after his failure to pay taxes was reported.

"I think it shows a lot of integrity and guts to bring something to the surface that you probably didn't have to, but he did the right thing and that's very important," said Sen. Tim Scott, who was first elected to the U.S. House alongside Mulvaney in 2010. "I would count that as a huge positive for him and not a negative," he told the Post & Courier.

"As I've said from the moment he was first nominated, Mick is a great choice for OMB Director," Sen. Lindsey Graham said in a statement.

And in testimony before the Senate Health, Education, Labor and Pensions Committee, another Republican congressman picked by Trump for elevation to Cabinet agency head admitted he recently engaged in questionable ethical behavior that may have allowed him to benefit from legislation that he was pushing at the time.

Georgia Rep. Tom Price, Trump’s pick to run the Department of Health & Human Services, revealed that he purchased stock in a private placement for a biotechnology company after Rep. Chris Collins (R-N.Y.), a board member of the company and member of the Trump transition team, talked up the company to him.

Democrats immediately raised questions of whether Collins had shared non-public information with Price, which Price denied.

All of this comes as a newly released police report shows that the billionaire Wall Street trader Trump has nominated to be the secretary of the Army was accused in August of punching a concessions worker who attempted to stop his wife from entering a restricted area at a racehorse auction in August.

Despite the troubling news about his Cabinet, Trump adviser Kellyanne Conway brushed aside all this week's revelations as just noise from disgruntled Democrats.

"The idea of humiliating and trying to embarrass qualified men and women who just wish to serve this nation is reprehensible," Conway said during an appearance on Fox News Channel on Wednesday morning.

"What's different now is that [blocking a nominee] is going to require Republicans to stand up to their own president," Jim Manley, a longtime aide to former minority leader Harry Reid, told the Washington Post. "I'm not sure that's going to happen. So far, it seems like everyone is afraid of getting on the wrong side of a tweet storm."