James Mattis and Mike Flynn both have bizarre obsessions with Iran 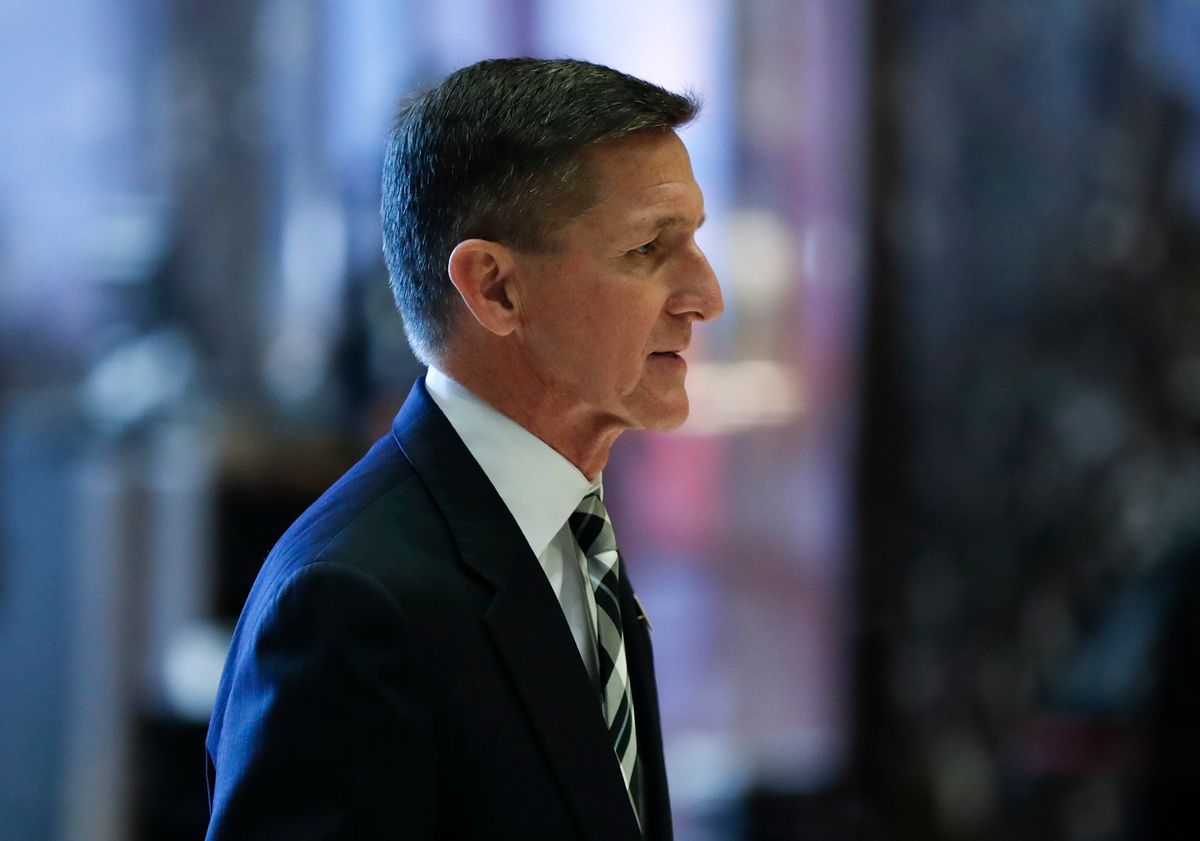 Gunfire broke out in Tehran, Iran’s capital, on Monday. A drone flew over the city and provoked anti-aircraft fire. Deputy of Air Defense Alireza Elhami said that the drone left the restricted area after the firing.

It is likely that this episode is harmless, but nothing can be taken lightly in the age of Donald Trump. Trump has assembled a team that is obsessed with Iran. His Secretary of Defense James Mattis and his National Security Adviser Mike Flynn take their fulminations into bizarre territory. Last April, Mattis said that ISIS is "nothing more than an excuse for Iran to continue its mischief. Iran is not an enemy of ISIS; they have a lot to gain from the turmoil that ISIS creates." That Iran is providing material support to the Iraqi armed groups that have just entered Mosul (Iraq) after ejecting ISIS from parts of the city and that Iran is providing aid to the Syrian government in its battles against ISIS does not change Mattis’ reality.

Nor is Flynn’s perspective threatened by the facts. As director of the Defense Intelligence Agency under Obama, Flynn wanted to find evidence that Iran was responsible for the attack on the U.S. consulate in Benghazi, where U.S. ambassador Chris Stevens was killed. Like the neo-cons who took the United States to war illegally against Iraq, these men itch to bomb Iran.

What obsesses these men is that Iran is now more powerful in West Asia than it was before 2001-03. The United States, as I show in "The Death of the Nation and the Future of the Arab Revolution," removed two of Iran’s historic enemies — the Taliban in Afghanistan and the Ba’ath in Iraq. To push Iran back into its borders the American strategic planners first tried to go after its allies in Syria (with the 2003 Syria Accountability Act) and then in Lebanon (with Israel’s 2006 war). Neither worked.

In 2006, the United States fabricated a crisis over Iran’s nuclear energy program to push for United Nations, European Union and U.S. sanctions. This too did not work. The sanctions regime had to end in 2015. Iran, with a population two and a half times greater than Iraq, cannot easily be bombed to submission. Iranian patriotism is deep, and even those who dislike the regime in Iran would not welcome a Western attack on it.

Saudi Arabia, for political purposes, fears any regional threats — whether from Iran or from the neo-Ottoman objectives of the Turkish government. But the Saudis have been far more forgiving of the Turks, since Turkey — until recently — has been subservient to Western interests. When Saudi Arabian and Turkish interests have collided — as they did over the ascension of the Muslim Brotherhood in Egypt — then the Saudis have used every diplomatic muscle to push out the Turks. But in Syria, for instance, Saudi Arabia and Turkey worked closely in their attempt to overthrow the government of Bashar al-Assad. Now that Turkey has shifted its goals, the tension between Saudi Arabia and Turkey will return.

With Iran, there has not been — since the Iranian Revolution of 1979 — any collaboration with the West nor with Saudi Arabia. The Kings of Arabia have feared that Iran’s Islamic Republic provides a direct challenge to its Islamic Monarchy. Sectarianism plays a role here, but the obsession is primarily over the theory of rule — that a Muslim country need not have a King is anathema to the Saudi monarchy. This Saudi fixation combined with the fantasies of the Israelis releases a toxic worldview into the American security industry. Iran, for them, is no longer a real place, but a fantastic place of evil — North Korea in West Asia, Putin as a Mullah. Fantasy of this kind has no place in the making of foreign policy, but here it is fantasy combined with remarkable illiteracy that rules the day.

The Guardian ran a stunning report recently with a headline that read Iran repopulates Syria with Shia Muslims to help tighten regime’s control (published on Jan. 13). The main sources for the article were an unnamed senior Lebanese official, Abu Mazen Darkoush, a former Free Syrian Army commander, and Labib al-Nahas, the chief of foreign relations of Ahrar al-Sham — one of the more nasty extremist groups that had operated in Aleppo. These people all tell the Guardian’s Martin Chulov that Iran is driving an agenda of ethnic cleansing from Damascus to the Lebanese border. None of these are credible figures, each with an axe to grind.

The opposition’s rumor mill has long suggested that the Syrian government is essentially a proxy for Iran and for Shia domination of Syria. The Ba’ath Party, which rules the government, is afflicted with myriad problems — of suffocation of political dissent, of violence against its opponents. It does not, however, have a history of ethnic cleansing. Certainly there are reports of "demographic transfers" (as the United Nations says) of people from the Damascus suburbs of Daraya and Moadamiyah — but these have not been on sectarian lines, more on political lines (rebels have been moved to Idlib, as from Aleppo).

It has been rather the extremist opposition that has purposefully cleansed village upon village of minorities, and it is the extremist opposition — especially Ahrar al-Sham — that has been unyielding in its hateful rhetoric against the Alawis and other minorities. I remember meeting some of these fighters two years ago and being horrified by their acidic rhetoric against minorities. They meant what they said. Over the course of 2016, extremist groups hit villages and cleansed them of minorities, villages such as al-Zara (in the region written about by Chulov) and then a series of villages in Latakia (Abu Makkeh, Aramo, Barouda, Beyt Shakouhi, Blouta, Bremseh, Esterbeh, al-Hamboushieh, Kafraya, Kharata, Nbeiteh, Obeen, Qal’ah and Talla). But this context does not appear in Chulov’s report nor in many of the reports that build up the anti-Iran case.

What these reports do not provide is an assessment of how Iran’s power is actually tempered by the contradictions inside Syria. After the Russian intervention into Syria in 2015, I asked an Iranian official why it was Russia and not Iran that entered the country. He did not have a conclusive answer, but he suggested two related points that I found of interest. First, that Iran — as a regional power — does not have the military heft to pull off an intervention of this scale. Russia’s intervention could not be "balanced" by the United States, because this would have put the United States in direct conflict with Russia (Secretary of State John Kerry recognized this when he told two aid workers that their demand for a U.S. intervention might start a nuclear war). Second, that Iran’s entry would unsettle Israel and provide the necessary provocation for a full-scale Western bombardment of Syria. It is for these reasons that Iran’s most respected military officer Qasem Soleimani went personally to Moscow in secret to plead the case for a Russian intervention to protect a very shaky Assad government.

Russia’s entry also inoculated the Syrian government from the charge that it is merely a proxy of Iran, a Shia government of a majority non-Shia country. It is impossible for the Syrian government to push for a sectarian policy given the demographic reality of the country. It has had to reinvent Syrian nationalism as the antidote to the sectarianism of the extremists and the perils of being seen as mere pawn in geopolitical games. "Suriyya kilha ma3ak" (Syria is with you) is a slogan of the pre-uprising period — now revived as part of this Syrian, not Arab — nationalism. Neither Iran nor Hezbollah call the shots in Damascus. Russia has seen to that. Hezbollah’s attempt to create a security zone along the Lebanese border is merely the extension of its policy from the Bekaa Valley into the Qalamoun Mountains. It has moved from one side of the weak Lebanon-Syria border to the other.

Fear-mongering about Iran’s ambitions on sectarian grounds feeds Saudi paranoia and gives fodder to the Saudi-backed clerics who fulminate from the minbar. It also provides the raw intelligence for the half-baked theories of the U.S. intelligence community and the State Department. These are precisely that kinds of reports that men like Mattis and Flynn would like to read, and would like to forward to their allies in Israel and Saudi Arabia.

Hastily the Trump team began to disavow their pledge to tear up the Iran nuclear deal. Europe — damaged by the destruction of Libya (since 2011) and the Western sanctions on Russia (since 2014) — can no longer afford to be cut off from the vital energy supplies from Iran. China and Russia will now ensure that there are never again U.N. sanctions on Iran. The United States made the Iran deal because of pressure from Europe and the acknowledgment that without Iran there was no way to bring stability of any kind of Iraq and Syria. If the Trump team tears up the deal it will further isolate the United States.

Options before the Trump team to squash Iran are few. It cannot on the one hand befriend Russia and take on China and Iran. This is the incoherence of Trump’s foreign policy. Trump’s main financial backers, Robert and Rebekah Mercer, and their intellectual, John Bolton, cannot change reality so easily. They will escalate against Iran as much as possible, but reality will be against them.