Vulgarians at the gate: The next 4 years could be a long, slow, messy slide into cultural oblivion

Think Donald Trump's campaign was full of previously unthinkable moments? It can only keep getting worse from here 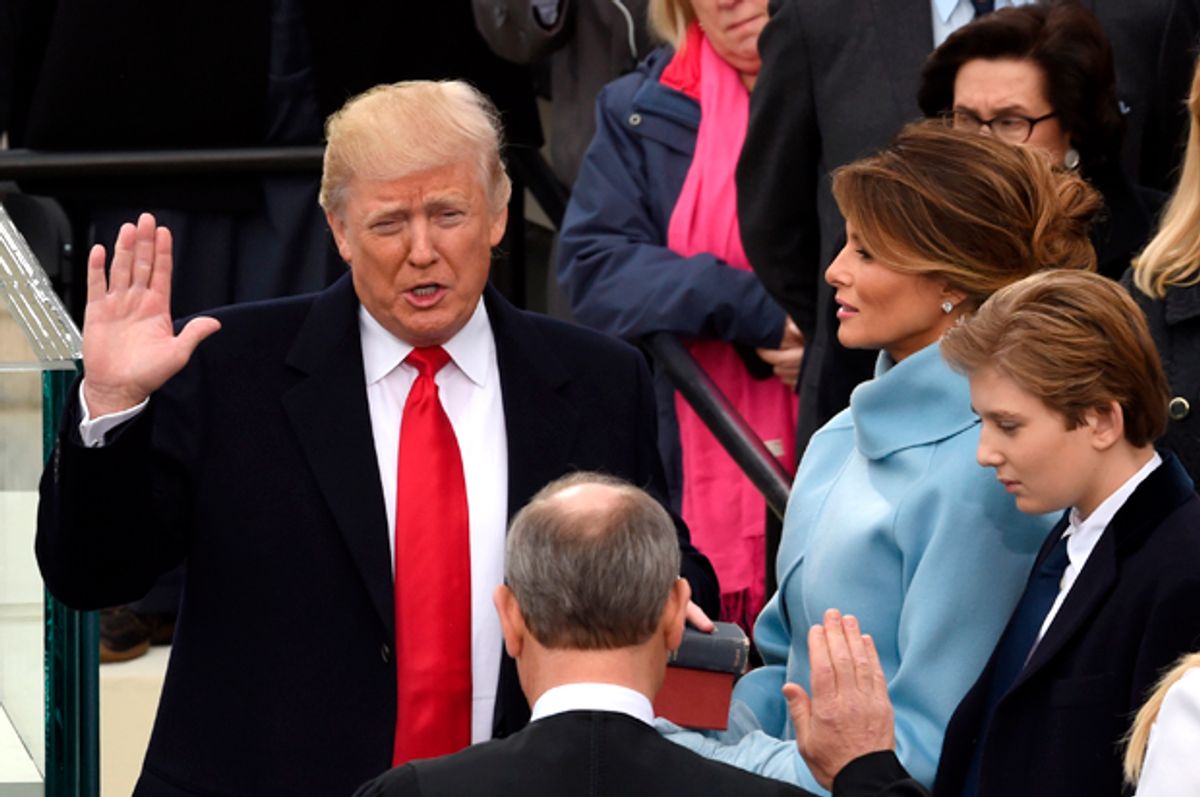 You see grown men wearing t-shirts printed with dick jokes. You hear parents shouting obscenities at the television during a football game, while their children throw food at one another. The woman behind you on the commuter train discusses the intricacies of her sex life on her cell phone. Right-wing commentators freely use terms like “libtard” and “cuck” to ridicule their ideological opponents, and then complain about “political correctness.” You watch as the Republican presidential nominee brags about the length of his penis, and is then caught on tape boasting about “grabbing women by the pussy” without their consent. Similar to tax policy, the admission soon becomes subject to partisan debate, then quickly forgotten.

These are but a few of the sights and sounds now normal in an increasingly coarse and crude culture.  Sociologists often refer to how societies “define deviancy down,” meaning that standards of decorum, and what qualifies as deviant, typically decline. Once a culture permits the previously unthinkable, the next logical move is tolerance of something even worse. Perhaps, when Trump is running for reelection in 2020, he will remove his pants and physically accost a woman on stage. Critics will demand his arrest. The Republicans will call Democrats “snowflakes.”

Critical to understanding the Trump era, and how it emerges out of certain elements of American culture, is the term “vulgar.” The original Latin defines it as “pertaining to ordinary people.” Donald Trump’s populism panders to his admirers, making it the province or ordinary people. Far from an act of democratic service, his form of demagoguery contradicts the fundamental principles of leadership. A leader should challenge the audience, seek to inspire ambition for improvement, and offer an aspirational model for emulation. Trump’s vulgarity, in the Latin sense and the more contemporary meaning of crudity, comforts people at their basest urges, biases and fears. As President Jimmy Carter, a decidedly sophisticated leader, especially by comparison, said of the new President, “He makes people feel good about their prejudices.”

After performing at one of the 2009 inaugural balls, Beyoncé told Robin Roberts that President Barack Obama made her “want to be smarter.” It is impossible to imagine anyone making a similar endorsement of Donald Trump, whose brazen ignorance only added to his appeal among supporters. “It is fine if you remain uninformed and uncultured,” he might as well be whispering into the ears of his devoted followers. One of the reasons many people detested the outgoing president was that his eloquence, and his combination of the poetic and professorial in his rhetorical style, challenged America to intellectually evolve, as Beyoncé explained with her own personal testimony. Remember that he was the first black president, and the resentment of his white haters becomes even clearer.

Obama projected the image of elegance and intellectual engagement as important throughout his presidency. His equally brilliant and charismatic wife, former first lady Michelle Obama, advised Hillary Clinton supporters, “When they go low, we go high.” Her exhortation demonstrated resistance to vulgarity, and acted as an exercise of instructive and productive leadership, but it failed to resonate with half of the electorate.

One definition of “vulgarian” is an “unrefined person with newly acquired power.” The surreal, science fiction image of Trump taking the oath of office with his hand on the Bible represents a triumph for the coarsest and crudest elements of American culture. Barack Obama’s tactic of gentle, sophisticated argumentation, with dignified reply to opponents, even as they viciously slander his character, will soon appear anachronistic, as Trump tweets and shouts at his critics with the vulgar techniques of the monkey bars bully.

Presidents possess cultural power and influence almost equal to their political authority. As the leader, symbol and representative of the United States, the president signals what is important, what matters, what is acceptable, and what is contemptible.

Filmmaker Steve McQueen explained that had Obama not become president, he would have never had the courage or ambition to make his Academy Award-winning film "12 Years a Slave." It hardly seems accidental that the Obama years saw the rise of African-American expressions of protest, solidarity and history throughout the arts and on the streets. Had many of the conservative and apathetic Americans who ignored Obama paid closer attention to his aspiration of intelligence, hope and stoic calm, they would have benefited immensely.

The White House is now occupied by a narcissistic drama queen who fails to adhere to any standard of basic decency, whether they are admonitions against mocking disabled people or taboos against the objectification of women. Trump justified the worst of his public comments about women’s appearances by claiming that when he uttered them, he was functioning as an entertainer, whether on Howard Stern’s radio show or "The Apprentice." The amusement of the audience was more important than the maintenance of respectful and refined behavior. Trump will enforce the same degradation of public standards from the most powerful office in the country.

Millions of people are terrified because of Trump’s promises to escalate the assault on women’s reproductive rights, damage the lives of immigrants, mistreat Muslims, undermine public institutions, confiscate people’s health care and disrupt international stability. Democrats will have to discover an effective technique to counter Trump that matches his penchant for drama and spicy television without succumbing to the vulgar temptation, like Marco Rubio pathetically did during the Republican primary. The combative and confrontational style of Bernie Sanders, Elizabeth Warren and most especially, the late Ted Kennedy seems to have potential. The strength and profound simplicity of John Lewis’ denunciation of Trump is another good model to follow. Given the importance of the political fight that awaits the country, it is understandable that vulgarity does not rank high on the list of concerns about the Trump presidency.

We all have to live in America on a day-to-day basis, however, and we are all going to suffer the consequences of Trump’s empowerment of the crude and crass.

A deranged but happy man stood up in the middle of an airplane to chant Trump’s name. He also taunted the passengers he believed were “Hillary bitches.”

The next four years are going to be a bumpy ride.