Will Donald Trump's divided America evoke the social turmoil of the '60s? It might — and the 1860s too 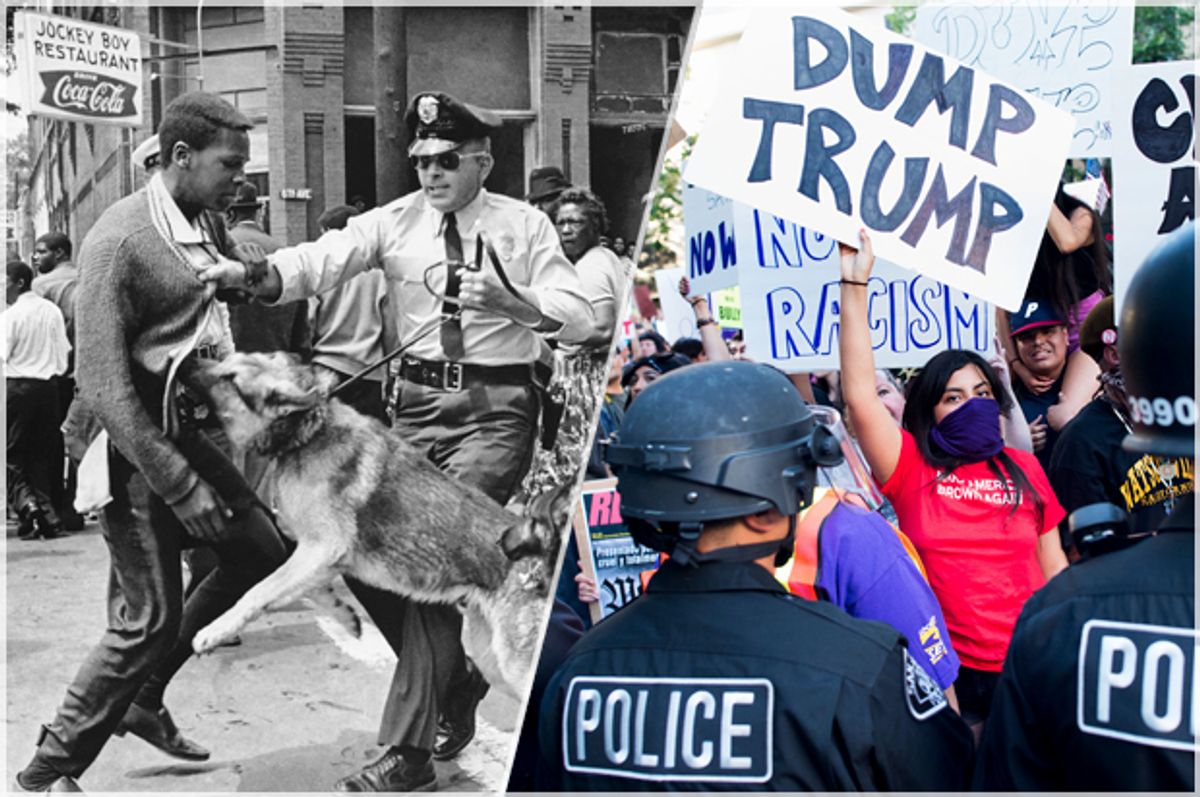 I began the morning on Inauguration Day intending to write a letter of apology to my kids, who are going to spend their teenage years in America under President Donald Trump. Not easy to think about, is it?

I could make ritual noises here about how I’m going to move them to Ireland or France, and how we can’t be sure Trump will serve out a full term. But let’s skip the fantasy sequence, shall we? (Remember all that time you wasted reading about the “Hamilton electors”?) As we are rapidly coming to understand, Europe is no escape, and it’s hard to imagine what Trump could possibly do — given what we know or believe he has already done — that would lead a Republican Congress to pursue impeachment.

As the day wore on and the painful spectacle in Washington unfolded, I began to feel more defiant. The more I thought about it, the more I came to feel that the “apology to future generations” is an empty ritual too, the kind of weak-kneed liberal groupthink I have spent my career as a writer and editor trying to resist. President Donald J. Trump never apologizes for anything — as he made clear on Friday, with the most belligerent inaugural address in living memory — and those of us who want to stand against him need to show some backbone. The time for weeping is over. Urgent business lies ahead.

What, in fact, do I have to apologize for? Oh, trust me, in my personal life and my parenting there is plenty. But that is not the subject here. President Donald J. Trump has taken office, and I am not to blame for that. Trump’s ascension to power is an improbable plot twist in a long-running cultural and political conflict that began before I was born, and will no doubt continue after I am dead.

We are now moving into a more open and overt phase of that conflict. It is a conflict we have seen before, that never quite went away. It's a conflict between the nearly meaningless code words “liberal” and “conservative,” between warring generations, between competing versions of the American past and the American future, between the diverse and cosmopolitan culture of America’s major cities and the self-defined tradition of the so-called heartland.

My boss suggested to me this week that we are on the verge of a period of sustained social turmoil along those lines, something like the unresolved cultural revolution of the 1960s. Even though it’s a cliché of political discourse to describe any moment of open conflict or adversarial activism as “like the ’60s,” he’s probably right. We can only hope it does not reach the scale of the 1860s, when an earlier phase of this same conflict reached its bloody climax.

One of the curious aspects of this new phase of conflict is that both sides see themselves as persecuted and downtrodden, fighting against the power structure. That is clearly different from the dynamic of the 1960s, when the divisions between the Establishment and the counterculture were obvious to all. But who is the Establishment now, and where is it? Everyone says they're against it, including a newly elected president who has appointed a roster of billionaire bankers and CEOs to his Cabinet.

At every Donald Trump campaign rally, the crowd was warmed up in advance with repeat playings of the early Rolling Stones greatest-hits collection, "High Tide and Green Grass." Mick Jagger and Keith Richards were not pleased but, OK, why not? Trump's voters are overwhelmingly aging white boomers; the odds that they grew up listening to classic rock approach 100 percent. But whatever the Stones represent in the culture now, there is no doubt what they represented in the '60s: danger, rebellion, violence, drugs and sex.

Trump and his followers have a deeply confused relationship to the conflict of the '60s, which is now deep enough in the past that relatively few of them participated in it first-hand. Essentially they want to be on both sides at once: Of course they don't identify with the hippies and the gays and the bra-burning feminists and the bomb-throwing radicals and the Black Panthers. But they don't want to be the uncool people either. Their version of jingoistic, unthinking hypernationalism is, somehow, not their grandparents' version. They are the true heirs to the rebel spirit of the '60s and the soul of rock 'n' roll: "Street Fighting Man" and "Sympathy for the Devil" are hymns to Donald Trump.

Look, we can all find reasons to feel ashamed about what happened and how it happened. I am mortified that the diverse and perplexing nation where I and my children were born and raised, a nation that simultaneously represents the best and worst of human history, has taken such a nihilistic turn. But the rise of President Donald Trump has been a long time coming. It's like something written in the stars, an appointment with destiny that our nation could not avoid forever.

I tried to stop it, after my own fashion. Many other people did much more. Like most of you I believed we probably would. (Listening to Trump’s nomination speech from behind the stage in Cleveland, I had a premonition I tried to ignore.) None of it was enough. Those of us in the media have been consumed by second-guessing and self-criticism in the wake of Trump’s election, and much of that is warranted. But what happened was not Salon’s fault or CNN’s fault or the New York Times’ fault.

It is both true and not true that President Donald Trump is a historical fluke. The peculiar circumstances of his victory were shaped by various marginal and unpredictable factors — the Electoral College, the purported Russian hack, James Comey’s infamous letter to Congress, the problematic public image of Hillary Clinton and her inept campaign — that came together to produce an unlikely outcome. In the thought experiment where you change any one of those factors, the result could well be different.

But I think it is fairer to say that the structural flaws in American democracy and American society have been visible for decades, even if the bipartisan political consensus pretended not to see them. In Trump's “Idiocracy”-style path from craptastic real estate tycoon and reality TV vulgarian to the White House, he exposed those flaws and exploited them brilliantly. He was like the court jester who mocks the king’s affectations and winds up on the throne himself, bloody knife in his hand. He was exactly like that, come to think of it. But if Trump had been defeated, that would only have postponed the day of reckoning, not canceled it.

Trump’s presidency poses an unprecedented crisis for the American republic. There can be no doubt about that. I don't claim to know whether we will survive it. I fear that the reassuring blandishments heard from Clinton and Barack Obama and other defenders of normative democracy are just wishful thinking. This too shall pass — I believe that, of course. Donald Trump will not be president forever, and the American majority that did not vote for him and does not support him will get another chance to shape the nation’s future. But what that will look like, and what it will cost, I cannot begin to guess.

Facing an earlier moment of national crisis and division, one that took many decades to unfold, Thomas Jefferson famously wrote that he feared America had brought upon itself the wrath of the Almighty: “I tremble for my country when I reflect that God is just: that his justice cannot sleep for ever.” That was pretty rich coming from the slave-master of Monticello, to be sure. But despite his grievous failings as a man and a private citizen, Jefferson saw clearly that history had a cyclical and often circular character and that a future “revolution of the wheel of fortune” would unavoidably come. (If any of the Founding Fathers knew the word “karma,” it was surely Jefferson.)

We need not invoke the deity to feel a similar trepidation today. Trump’s election — driven by an energized and angry minority, heavily concentrated in the middle of the country — is itself a form of karmic payback for the cosmopolitan triumphalism of the Obama years. It has already begun to engender an equally heated counter-reaction. To suggest that we are revisiting the unfinished business of the 1960s, the decade of student radicalism and political assassination and black nationalism (and also of Richard Nixon’s “Southern strategy” and George Wallace and the reborn conservative movement), is almost certainly true. But it also foreshortens history too much: What we’re really talking about is the unfinished business of America.

Those of us who have done what we could in that long war for the soul of America have nothing to apologize for. We have made mistakes, and will make more. We have quarreled among ourselves, and we have sometimes misjudged or misunderstood the enemy. (As Baron von Clausewitz could have told you, and Don Rumsfeld after him, in war stuff happens.)

We can argue some other time about whether the Democratic Party sold its soul to neoliberal capitalism in the 1990s: I would argue that it did, and that in the long run that was nearly suicidal. Or we can reopen the old wounds of Ralph Nader’s 2000 campaign, which some liberals still blame for everything bad that has happened since, up to and including the Trump debacle. I would say that is grossly exaggerated, although from this distance the endgame of the Nader campaign looks like a grievous tactical error.

Such disputes will recur, without doubt. The internal conflict now unfolding within the Democratic Party, with both Clintons and Barack Obama now off the stage, is a small but significant front in the larger war. But navel-gazing and repentance are not helpful now. We are entering a period where the lines of combat are clearly drawn, and contrasts that once appeared subtle become stark.

I grieve for my children, and the world’s children, that they must come of age amid the global emergency represented by the rise of Donald Trump. It's a shocking turn of events, and we must reckon with the overconfidence that led many of us to believe this could not or would not happen. But we are better off taking responsibility for the future than trying to make amends for the past.

We are not responsible for the depth of self-destructive rage felt by so many people in America and elsewhere, nor for the fact that the global economic system has been powerless to counteract it. Unless "we" is construed to include the members of President Trump’s Cabinet, the financial elite of New York and London and Frankfurt and the leadership of the International Monetary Fund. Those people are responsible for a great many things, and should get down on their knees in their 7,000-euro suits and beg for our forgiveness.

Many of us believed America was immune to the rising tide of authoritarian populism around the world, and that the normal ebb and flow of politics would surely reassert itself. That was a vain and stupid mistake. But now that the Trumpian tsunami has carried us miles inland and dumped us, battered and bleeding, in an uncharted landscape, what's the point of saying we're sorry? If you dig the sand out of my wounds, I'll try to do the same for you. After that we can find some weapons and figure out where the hell we are.