Middle East derangement syndrome: Egypt, Turkey and Israel have all fallen prey to delusions about Trump

Leaders in the region's major powers are ecstatic about President Trump. They're likely to be disappointed 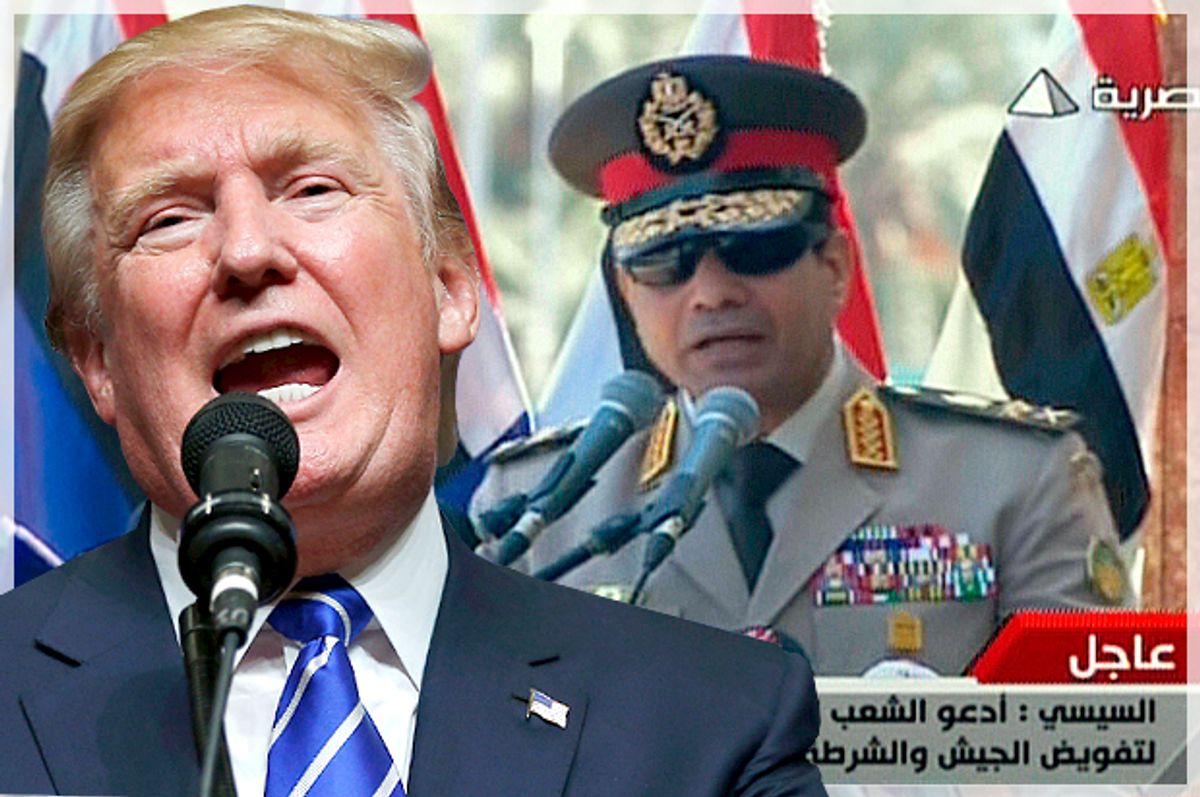 At about 3:30 a.m. on Nov. 9, Donald Trump received his first congratulatory phone call as president-elect. It came from Egypt’s president, Abdel Fattah al-Sisi. In the weeks since then, Egyptian officials pointed to the call as a symbol of a new era in U.S.-Egypt relations, which soured considerably after the July 2013 coup d’état that overthrew the elected government of Muslim Brotherhood leader Mohamed Morsi and brought Sisi to power. Egyptian officials were so happy with the outcome of the election that Sisi reportedly considered attending the inauguration.

Sisi stayed in Cairo, but Turkey's foreign minister, Mevlut Cavusoglu, showed up in person. It is not unusual for some foreign ambassadors to attend the inaugural ceremonies; the presence of someone as senior as Cavusoglu was. A delegation of Israeli settlers also made the trip to celebrate the Trump presidency. No one from the Arab Gulf states attended. Unlike the Egyptians, Israelis and Turks, who seem positively giddy over Trump, the Saudis and Emiratis have taken a more cautious approach to change at the White House -- but they nevertheless seem pleased to put the Barack Obama era behind them.

It all seems rather strange given how Trump rode to power, winking at Islamophobes as well as anti-Semites and otherwise appealing to isolationists. If there was any sign during the long campaign about Trump’s approach to the Middle East and U.S. foreign policy more generally, it was retrenchment. That is not good for Washington’s major regional allies, yet leaders in these countries seem willing to overlook this inconvenient fact in favor of a fantasy that Trump will be a better steward of their security and American interests than was Obama.

The Egyptians, for example, are convinced that the Trump administration will offer its unconditional support for Sisi and drop the Bush and Obama administrations’ objections to Egypt’s abysmal record on human rights. For their part, the Turks know that the new administration will support their fight against Kurdish nationalism. Israelis are now confident of American political and diplomatic cover to continue the slow and steady annexation of the West Bank. The Arab Gulf states and Israel, outraged over Obama’s outreach to Iran, are counting on Trump to restore Washington’s adversarial relationship with Tehran.

Even if Trump does what Middle Eastern leaders want him to do, one has to wonder: To what end? How will it make things better? Is there not a significant chance that Trump will make things worse instead? It’s worth remembering that fantasies are by definition alluring, but are rarely satisfying when someone tries to make them come true. The Egyptians seem likely to get what they want: a change in tone in their bilateral relations with Washington. Yet they should keep their enthusiasm in check.

Besides the temporary political boost that better relations with Washington will give Sisi, they won't make the insurgency in the Sinai Peninsula go away or make Egypt’s struggling economy suddenly grow. There is no indication that a Trump administration will be more forthcoming than Obama on military or economic assistance. Trump is about the “art of the deal.” In his transactional world, what is Egypt’s currency? The old Egyptian refrain about being a “force for stability in the region” is getting old -- and is no longer accurate. Besides, what does Trump care about the region other than “bombing the [expletive] out of [the self-proclaimed Islamic State]”?

What Sisi has to offer the new administration — international support against the Muslim Brotherhood — is something the Egyptians have already given Trump for free. After a moment of self-satisfaction and euphoria that Obama has vacated the Oval Office, the Egyptians are likely to confront the reality that the problem in their relationship with the United States has been in Cairo, not Washington. Egypt is important because of its problems, only one of which interests the new American president — terrorism. And as the American experience over the last 16 years suggests, applying ever-increasing levels of force to the problem does not work.

It is a similar issue with the Turks, who are setting themselves up for disappointment that Cavusoglu’s vainglorious attendance at the inauguration was an attempt to hide. Trump's incoming secretary of state, Rex Tillerson, testified at his confirmation hearings that the main Syrian Kurdish fighting force — the People’s Protection Units (YPG) — which the Turkish government (rightly) considers to be a close affiliate of the Kurdistan Workers’ Party (PKK) -- is Washington’s “greatest ally” against the Islamic State.

The PKK has been waging a terrorist campaign against Turkey since the time Trump was married to his first wife, Ivana. The Obama administration raised the ire of Ankara because it coordinated with the YPG in the fight against the Islamic State, which is also Trump’s priority. How is that making U.S.-Turkey relations great again? At least the Egyptians can make the case to the White House that they are allies in opposing the Muslim Brotherhood. Turkey’s ruling Justice and Development Party, on the other hand, is an Islamist group that gave Egypt’s Muslim Brothers refuge and a platform to delegitimize the Egyptian government. That history is unlikely to sit well in a Trump administration that is profoundly suspicious of all things Islamic.

The Israeli government is also psyched about Trump, who plans to move the U.S. embassy from Tel Aviv to Jerusalem and appointed a settlement-friendly New York bankruptcy lawyer, David M. Friedman, as U.S. ambassador. This was a clear signal that, allegedly unlike Obama, Trump actually “has Israel’s back.” Yet there are signs of potential trouble. As a candidate, Trump called Israeli-Palestinian peace the “ultimate deal.” Despite the long list of failed American efforts to bring this conflict to an end (or maybe because of that), it is hard to imagine that Trump won't wade into the peace process at some point. That is bound to cause friction between Washington and Jerusalem, no matter how happy Israel’s annexationists are right now. Then again, Trump may very well enable Israel’s settlement project, which will help seal Israel’s permanent occupation, sow further violence, make it difficult to develop ties with important Arab countries and potentially undermine Israeli democracy.

More than anything, it is Trump’s apparent hostility toward Iran that has made the Israelis and their virtual friends among the Gulf countries optimistic about the new administration. During the campaign, the president said he would tear up the Joint Comprehensive Plan of Action, or JCPOA, otherwise known as the Iran nuclear deal. He also declared that Iran is the “biggest sponsor of terrorism around the world” and that he would counter Iran’s “aggressive push to destabilize and dominate” the Middle East.

Iran is without a doubt a bad actor, but if Trump withdrew the United States from the JCPOA, it probably would not make much difference. That is a multilateral agreement to which the European Union, Russia and China remain committed. The Saudis and Emiratis have indicated that they can live with the deal so long as Washington is tough on Tehran. There is logic to this, of course, but Trump may be less threatening than his rhetoric suggests. He seems inclined to make a deal with the Russians on Syria that would leave Syrian President Bashar al-Assad in place. That would be a big win for the Iranians.

It is reasonable for the Gulf states to expect increased American support in their campaign against the Houthi rebels in Yemen, where Iran has taken advantage of chaos to bleed the Saudis. Beyond that, Saudi Arabia and the United Arab Emirates may be disappointed. Trump's secretary of defense, former Marine general James Mattis, reportedly proposed attacking Iran in retaliation for Tehran-backed militias targeting American soldiers in Iraq in 2011.

Trump may actually be closer to Obama than to Mattis on this issue. A significant aspect of the new president's campaign-trail appeal was his criticism of George W. Bush's Iraq invasion and his disdain for the foreign policy elite who have gotten the United States so deeply entangled in the Middle East. There will be no Obama-like rapprochement with Iran, but Trump may decide not to go after the Iranians in Iraq, Syria, Lebanon, Yemen and elsewhere.

Of course there is no way of knowing exactly how Trump will deal with the Middle East’s multiple and complex problems. He seems to have only three ideas about American foreign policy: destroying the Islamic State, cooperating with Russia and challenging China. This may leave him room to maneuver, but that would come at the expense of the coherence and much discussed “leadership” that Obama's critics claimed he lacked. More than likely, the Trump White House is going to do what candidate Trump did: make it all up as it goes along. That does not bode well. It is unlikely that American power can put the Middle East back together. But it can definitely make things worse.