If the relocation is approved, a Las Vegas hotel tax hike would fund nearly 40 percent of the Raiders' new stadium 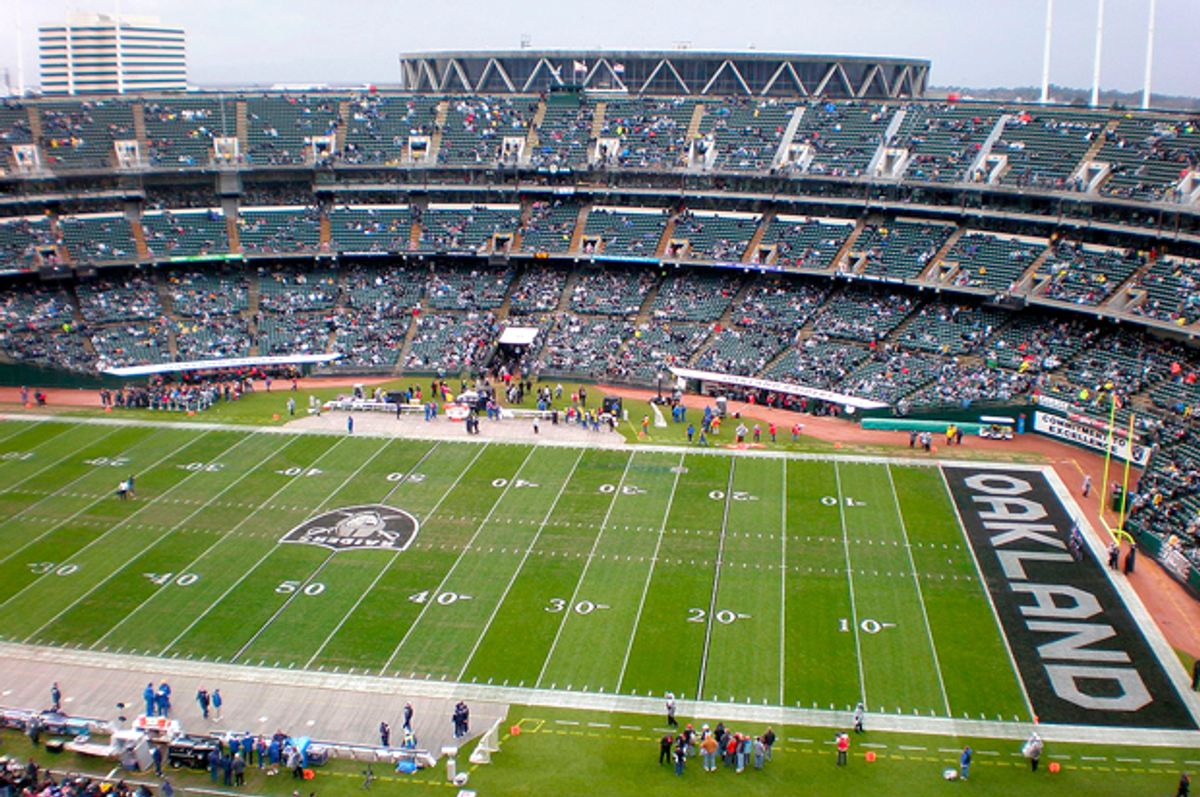 The Oakland Raiders moved one step closer to leaving the San Francisco Bay Area for Las Vegas. If  the relocation deal is approved, a hotel-room tax increase at  the nation’s gambling hub would help pay for a shiny new $1.9 billion stadium.

The team filed its paperwork to win approval for the move from the National Football League, the NFL announced Thursday.

“The application will be reviewed in the coming weeks by league staff and the stadium and financing committees," the league said in a statement. The deal also requires the support from at least 24 of the 32 NFL team owners in a vote that would take place during a meeting in Phoenix on March 26-29.

If the relocation is approved (and Bay Area investors fail to entice the team to stay), then the new home of the Las Vegas Raiders would become the largest taxpayer-subsidized stadium deal in NFL history, blowing past the $600 million in public money used to build the Atlanta Falcons' $1.5 billion Mercedes-Benz Stadium and the nearly $500 million the public is picking up for the U.S. Bank Stadium in Minneapolis, the $1.06 billion home of the Minnesota Vikings.

State officials have said the team would bring more tourists to Las Vegas, but critics question whether the benefits outweigh the costs.

“The big carrot being held out to Vegas residents is that it will bring in new tourism that will help pay for the hotel-tax increase,” Neil deMause, co-author of the book “Field of Schemes,” told Salon in an email. “The notion that there are currently tourists who aren’t going to Vegas but will start to do so once there are Raiders games to be seen is, let’s say, unproven at best — it’s far more likely that existing visitors will just reschedule their planned trips around what NFL games they want to see, but the NFL boosters don’t want to hear that.”

With the help of Goldman Sachs, the NFL and Raiders owner Mark Davis would arrange $500 million in financing to fund the new Vegas stadium. Another $650 million would come from billionaire casino magnate and major Republican Party donor Sheldon Adelson, one of the richest men in America. The rest, $750 million, would come from a lodging tax paid primarily by tourists that was approved by state lawmakers in October. The subsidy deal explicitly excludes the public from sharing in the future profits from the stadium and would lock in the hotel tax even if the project comes in under budget, according to the San Francisco Chronicle.

Local officials and team backers often argue that deals like this ultimately benefit the public by creating jobs and generating peripheral economic activity and tax revenue. Yet the immense wealth of team owners and stakeholders has critics questioning why public funds are needed when the primary individual beneficiaries are private citizens with enough financial clout to fund and build these projects on their own. Adelson’s net worth is estimated to be about $31 billion, according to Forbes, and Davis, who inherited the Raiders from his father, is worth an estimated $500 million.

The biggest issue for critics like DeMause is the sheer amount of public money going to stadium projects. Pitching in a few tens of millions of dollars on a big project that would benefit private investors might be justifiable if there’s a proven net increase in jobs and tax revenue to help fund truly public projects like road maintenance and schools.

But evidence is scant about the long-term benefits (not just temporary spikes in construction jobs and other project-related economic activity) and the so-called multiplier effect, the claim that publicly-subsidized megaprojects increase incomes and therefore create more spending and economic activity. A study by economists Roger Noll and Andrew Zimbalist in the late ’90s concluded that backers of these types of deals often radically overstate the long-term benefits.

“A new sports facility has an extremely small (perhaps even negative) effect on overall economic activity and employment,” the authors wrote. “No recent facility appears to have earned anything approaching a reasonable return on investment.”

Bay Area proponents of keeping the Raiders in Oakland are offering a new $1.25 billion stadium, but so far that proposal would be privately funded, and smaller. If business executives like Adelson believe in the magic of capitalism, perhaps they should play ball on a level playing field by declining handouts to subsidize their investments.