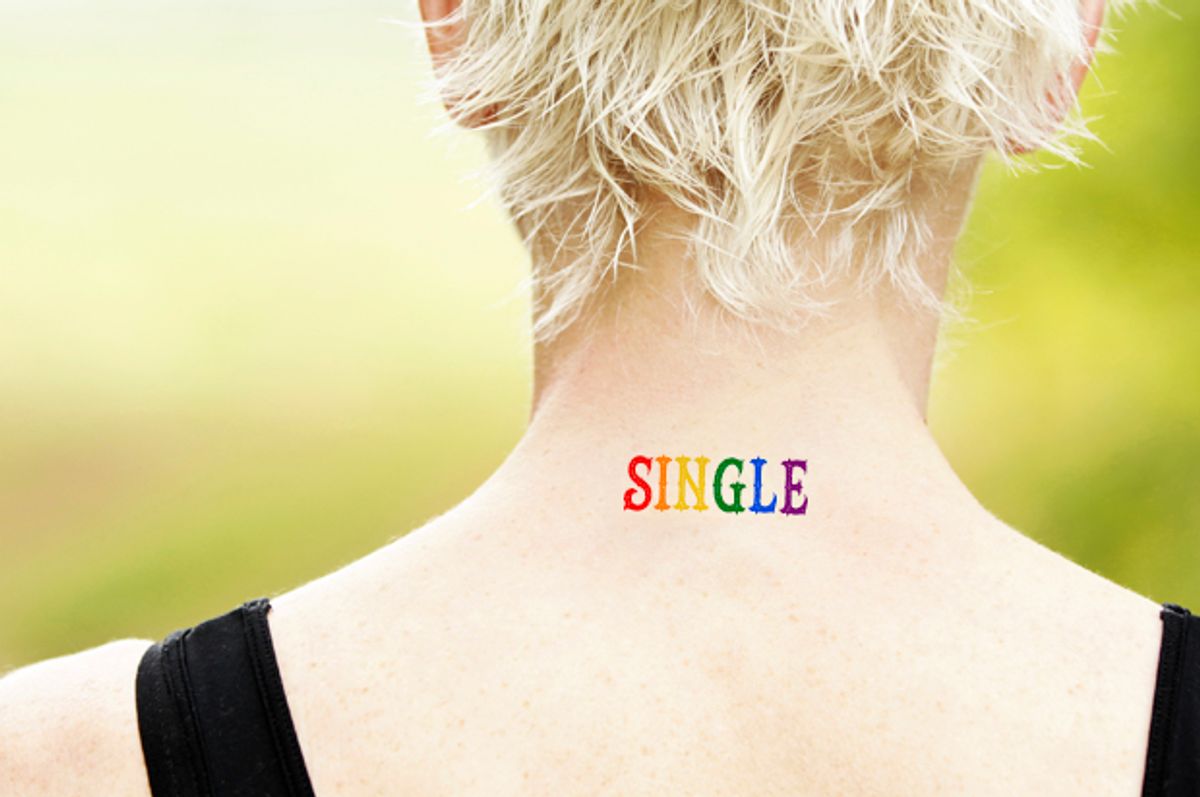 About a year ago a dear friend and I went to a bar in Hollywood where everyone was swiping left or right on their cell phones without looking up. A familiar apathy overcame me. My desire to participate in dating rituals was depleted. I’d long since grown comfortable with the invisibility of being a short, thick woman with crows feet in a city that salivates over the lithe teenage daughters of 80s supermodels. Despite the fact that I was with my coolest partnered-up pal who never behaves like what Bridget Jones dubbed a “Smug Married,” I swallowed a glug of Sauvignon Blanc and suppressed the nagging feeling of failure. We left quickly, walking back to her place because we’d decided to binge the show “Thirtysomething” on Netflix. We remembered our parents watching it when we were kids, and suddenly it felt important to understand our own lives in their context.

We made it through the pilot and another half episode before she clicked the stop button and dropped the remote. Our eyes met under furrowed brows as we telepathically communicated: I just can’t.” In my borrowed PJs, I drove home and crawled into bed with the 12-year-old tabby cat I rescued when I was 23.

The show hit too close to home for both of us — for different reasons. Two bisexual girls sick of grappling with the heteronormative, have-it-all lives society expected of women our age. My friend married a man who wanted to have babies while she wanted to keep pursuing her career. She did not recognize herself anymore. I avoided relationships entirely, unable to fully recover from being raped a few years prior. I preferred to watch from the sidelines as everyone I knew built thriving personal lives. The feminist philosophies my friend and I championed were tested daily, and even at the twilight of the Obama Administration before the promise of a female presidency imploded it didn’t feel like we were winning.

Part of me always knew I would be different from most of my peers. I remember being sent to the principal’s office for kissing a girl in elementary school. I listened to Ani DiFranco in high school like it was a religious experience. Not once have I fantasized about being pregnant — not then, not now. Still, the story of ideal womanhood and adult maturation was one I internalized.  I wanted to be the best at everything, to be half of a picture-perfect power couple, and to be respected by my community. It was easier to date men, so I did. There was the cable news anchor who left me flummoxed in our heated debates, the young billionaire who taught me to play beer pong at the Wynn in Las Vegas, the auto critic who zoomed around in fast cars, and one really sweet Starbucks barista. Women happened in the wee hours of the morning, when we were still contact high from hanging with Snoop Dogg backstage at the House of Blues. I passed for straight and dated dozens of exciting people who were great on paper, never too happy and always knowing something wasn’t adding up. I couldn’t quite name it, though; the heteros and the homos often prefer that those of us in between languish in purgatory, which is better than where the Evangelicals say we’re going.

As the years passed attending weddings and receiving birth announcements in the mail, I felt numb. Still, I squeezed myself into a bridesmaid dress and plastered on a smile whenever I was called upon to support someone I love.

It’s impolite to speak of the pain a friend’s joy triggers in one’s own inner world. These things are never personal, but straight friends whose chosen family structures are supported and encouraged rarely recognize how frustrating it is for someone different to experience them as part of an aggregate power structure. I do my best to avoid taking it out on anyone; it’s simply a bad math equation for me. If I’m not intentional about how I apportion time and on whom I focus, I wind up spending a majority of my life immersed in a sanctioned heterosexual culture that at best I can’t relate to whatsoever and at worst I find patriarchal and oppressive. This is true whether I’m dealing with hipster Park Slope parents or James Dobson devotees.

When we were younger, the differences between my friends and I were easier to navigate. We were exploring our options together. It felt like we were all on the same team. With aging came distinctions. It became increasingly difficult to be as happy for people as I wanted to be when they celebrated life milestones I could not and did not want to claim for myself.

Cat lady. Non-monogamous. White privilege. You’re really a lesbian. All men aren't rapists so you should be able to find a nice one. Childfree. Libertarian. Entrepreneur. These things I am — especially combined — don’t fit in. They require constant explanation, re-traumatizing, justification. My exhaustion doesn’t count the same as a new parent’s with a shiny wedding band. I must be selfish or damaged or indulging in all sorts of extravagant free time. I have to be the one to suggest activities, drive to their houses, and otherwise adjust because they’re raising kids. We have nothing left to talk about, and I think:“Maybe in our 40s we’ll rediscover each other.”

I see the transition reflected back at me in their eyes, too. They battle guilt and nostalgia, chuckling at our old inside jokes with tense shoulders. There are merciful flashes of a way forward when I read their kiddos a fourth, fifth, and sixth bedtime story, and I exhibit temporary signs of competence in the company of children. The friends can tell — and I can tell — that I actually like doing the different voices of Winnie the Pooh and Piglet and Christopher Robin. In such moments I can’t tell if biology or Darwinism or heterosexism forces me to do a gut check, to ask myself if I am unnatural, as one family member once called me. I don’t care much because these would-be regrets always feel more like microaggressions within 10 minutes of departing the suburbs for my next adventure. Recently, one of these friends asked, dripping with concern, “Why are you still so lost?” Like my desire to preserve self-determination, heal some of my deeper wounds, and pursue my career interests is fundamentally untethered. I wonder sometimes if he understands why I respond to 2 in 10 of his texts.

Despite my bitching, these relationship dynamics are far from lamentable. I understand that aging naturally requires a significant amount of narrowing, but I also believe that more radical emotional honesty between friends would make it a hell of a lot more comfortable to achieve reciprocity and balance. It would also combat the erasure of non-conformist identities.

At this point, as an IRL thirtysomething, I simply choose to show up because that’s what friends do. Even when it hurts and I don’t know what to say to them. When I struggle to separate them as individuals from structural oppression. When I’m talking about what’s important to me and they’re eyeballing toddlers across the room, I tell myself they are still hearing me. Just multitasking. I tried to listen more intently, and to bring things to my friends’ lives that they might be short on: news articles, movie reviews, adult conversation, bitmojis.

Most importantly, I’ve learned to give myself permission to enjoy my chosen activities, dreams, and relationships. To take my time in building the life that is right for me.