Dear journalists: Are you the people’s tribunes or mere props decorating the scene for horrendous monologues?

These are times that try your souls, your acumen, your professionalism and your fidelity to truth 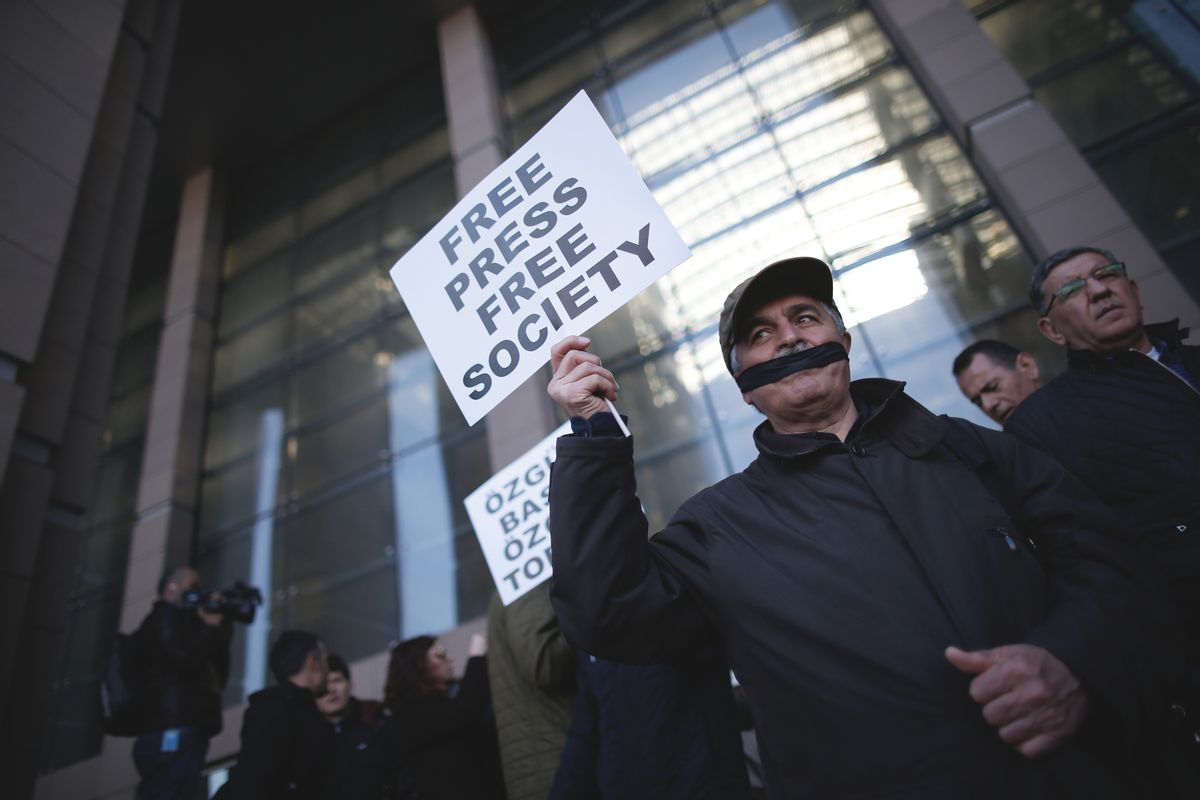 FILE- In this April 1, 2016 file photo, Turkish journalists cover their mouths with black ribbons before the trial of Can Dundar, the editor-in-chief of opposition newspaper Cumhuriyet and Erdem Gul, the paper's Ankara representative, outside the courthouse in Istanbul. Turkeys independent media landscape is rapidly shrinking as a result of government-sanctioned takeovers and forced closure. (AP Photo/Emrah Gurel) (AP)
--

It came to this, on Day 1 of the New Order: Donald Trump’s press secretary, Sean Spicer, summoned reporters to a scolding more officially known as a “briefing,” in the course of which Spicer (1) lied to them repeatedly, (2) scolded them for lying and (3) refused to permit questions. Andy Borowitz summarizes the scene nicely in the New Yorker: “DISTURBED MAN GETS PAST WHITE HOUSE SECURITY, GIVES PRESS CONFERENCE.”

Reporters, you were cast as potted plants. You were expected not only to be stenographers with amnesia, but stenographers gagged.

So some of you did what you often do when you’re given short shrift. You shouted out questions. You groused. You speculated that Spicer had been held hostage by his dear leader.

Here’s a simple moral truth: Spicer is an adult. He’s responsible for his lies. It was his mouth from which the collective scold blasted forth. And you’re responsible for assuming a role in which your part is to sit there and be humiliated — made fools of.

Could it be any more evident that the liars are running the White House? Their idea of Q-and-A is: Shut up.

As long as you are mere stooges, you play their game. You serve as mute extras in his horror movie. You lend credence to outright falsehoods. You lend stature to serial liars.

I’m glad to see that some of you have stopped prettying up the horror show. This New York Times headline is exemplary: “With False Claims, Trump Attacks Media on Turnout and Intelligence Rift.” But all of you now have to burrow deep into your consciences. Do you want to contribute to the illusion that the gang in charge care about democracy, that they respect evidence and logic, that they believe in fair play?

You, dear journalists, are the hostages as long as you play the game of the neo-fascists now running the country. I am well aware that “fascism” is an overused word but all its variants share two characteristics: The current regime communicates one way — it lies, lies about having lied and doesn’t care what you think.

Journalists: These are times that try your souls, your acumen, your professionalism, your fidelity to truth and your courage.