If Trump ends America's world leadership, who will step up? 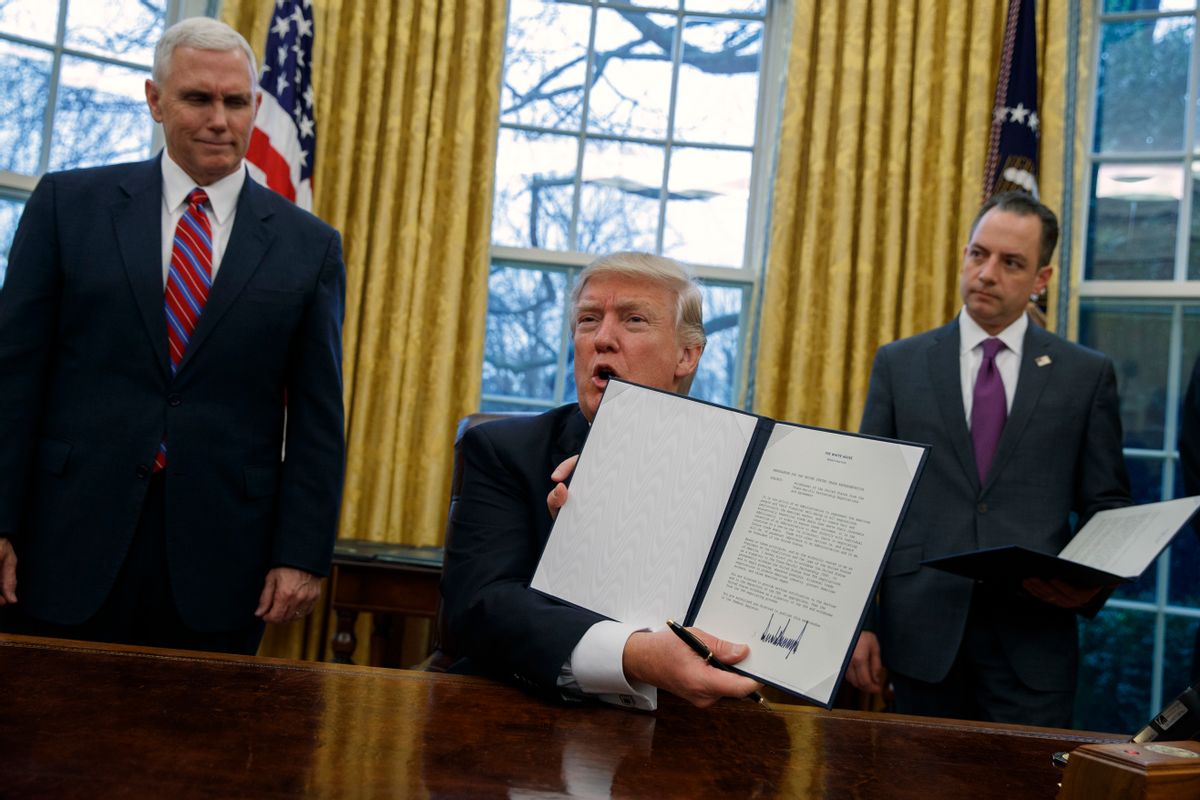 Vice President Mike Pence, left, and White House Chief of Staff Reince Priebus watch as President Donald Trump shows off an executive order to withdraw the U.S. from the 12-nation Trans-Pacific Partnership trade pact agreed to under the Obama administration, Monday, Jan. 23, 2017, in the Oval Office of the White House in Washington. (AP Photo/Evan Vucci) (AP)
--

President Donald Trump's pursuit of an "America first" foreign policy is raising questions about who, if anyone, will fill the void if the U.S. relinquishes its traditional global leadership role. China and Russia are among the aspirants for greater economic and military influence, while an ambivalent Germany could emerge as the West's moral compass.

For generations, the U.S. has largely set the terms for the global economy, policed international security threats and spearheaded the response to crises like Ebola and Haiti's earthquake. But after sweeping into office with an isolationist-tinged message rooted in the idea the U.S. needs to refocus on itself, Trump has said and done little to dispel the notion that he wants the rest of the world solve its own problems.

In his inaugural address, Trump said the U.S. for too long has been invested in other countries' industries, militaries, borders and infrastructure while letting its own fall into "disrepair and decay."

"That is the past," Trump said.

In one of his first acts, Trump on Monday formally withdrew the U.S. from the Trans-Pacific Partnership, a project launched under President George W. Bush and negotiated by President Barack Obama to set trade rules with Asia and counter China's economic influence

Trump said he was doing a "great thing" for U.S. workers by tearing it up. But Sen. John McCain, a fellow Republican, said the withdrawal "abdicates U.S. leadership in Asia to China."

China isn't the only country that could profit from U.S. retrenchment. In their own ways, Russia and Germany also could stake a claim to a greater global role. But no one can simultaneously match America's economic, military and moral might, and a more isolationist U.S. could mean a power vacuum.

"A huge number of things will simply not be done," he said.

While U.S. rivals like China and Russia would relish the opportunity to try to replace the United States, many countries in Asia, Europe and elsewhere are fretting the prospect of an American retreat. Even Germany is unsettled about being increasingly looked to as a moral example.

China, which has been investing billions in Africa and Latin America to curry influence in the developing world, could become an increasingly dominant economic power. It already is aggressively pursuing a multicountry trade deal that would appear the likeliest alternative to TPP, a scenario Obama's administration had warned would let China "write the rules" and lead to worse labor and environmental standards.

Beijing has used Trump's inauguration as an opportunity to ridicule America's democracy and tout its own communist system as superior. And many of China's neighbors share its fears about Trump's threats to trigger a "trade war" with the Asian powerhouse by taxing Chinese products.

"Whether you like it or not, the global economy is the big ocean that you cannot escape from," Chinese President Xi Jinping said last week at the World Economic Forum in Davos, Switzerland, laying out his plans for growth, overseas investments and expanded trade opportunities. It was the type of agenda the U.S. might have previously touted.

America's military alliances are no sure thing, either.

Trump has suggested a broad rethink, calling NATO "obsolete" and challenging U.S. allies to bear greater cost while beefs up its military in the Pacific and Russia exerts military power in Eastern Europe, which suffered for decades under Soviet domination.

It's not the only place the Kremlin is flexing its muscles. In Syria, Russia has backed more than a year of successful Syrian government offensives against rebels and is currently directing peace talks between the two sides. The U.S. was but a bystander at the negotiations Monday, while the White House said it could partner Russia to fight the Islamic State group in Syria. Such an arrangement could significantly enhance Russia's reputation in the Middle East.

"With the election of Donald Trump, the old world of the 20th century is finally over," German Foreign Minister Frank-Walter Steinmeier wrote in the Bild newspaper, reflecting a broader European lament about confused international leadership and increased disorder.

Trump's push has mirrored a broader global debate about globalization vs. isolation. British Prime Minister Theresa May will visit Trump later this week, seeking cooperation from an American leader who cheered her country's vote to leave the European Union — which Obama campaigned against.

Philippine President Rodrigo Duterte, who once cursed Obama for the American's criticism of his country's war on drugs, has embraced Trump's "America first" approach and expressed relief the U.S. will no longer lecture others on how to behave. Hungarian Prime Minister Viktor Orban, long accused of undemocratic tendencies, echoed that message, declaring "the end of multilateralism" in the age of Trump.

While China's increased economic strength and Russia's military vigor may appeal to some, few Western-looking nations will turn to either for moral leadership. Germany has tried to fill that void, embracing hundreds of thousands of refugees and championing a dwindling multilateralism 70 years after being culpable for some of history's greatest ever atrocities in World War II.

But Germany, Europe's economic motor, has a glaring shortcoming: An inability to match the hard power of aspiring leaders in Moscow and Beijing. And for all her efforts, German Chancellor Angela Merkel faces a tough re-election later this year, where she will find out if her Germany is immune to the new populist surge.