More than 200 people mass arrested in Washington, D.C. face up to 10 years in prison 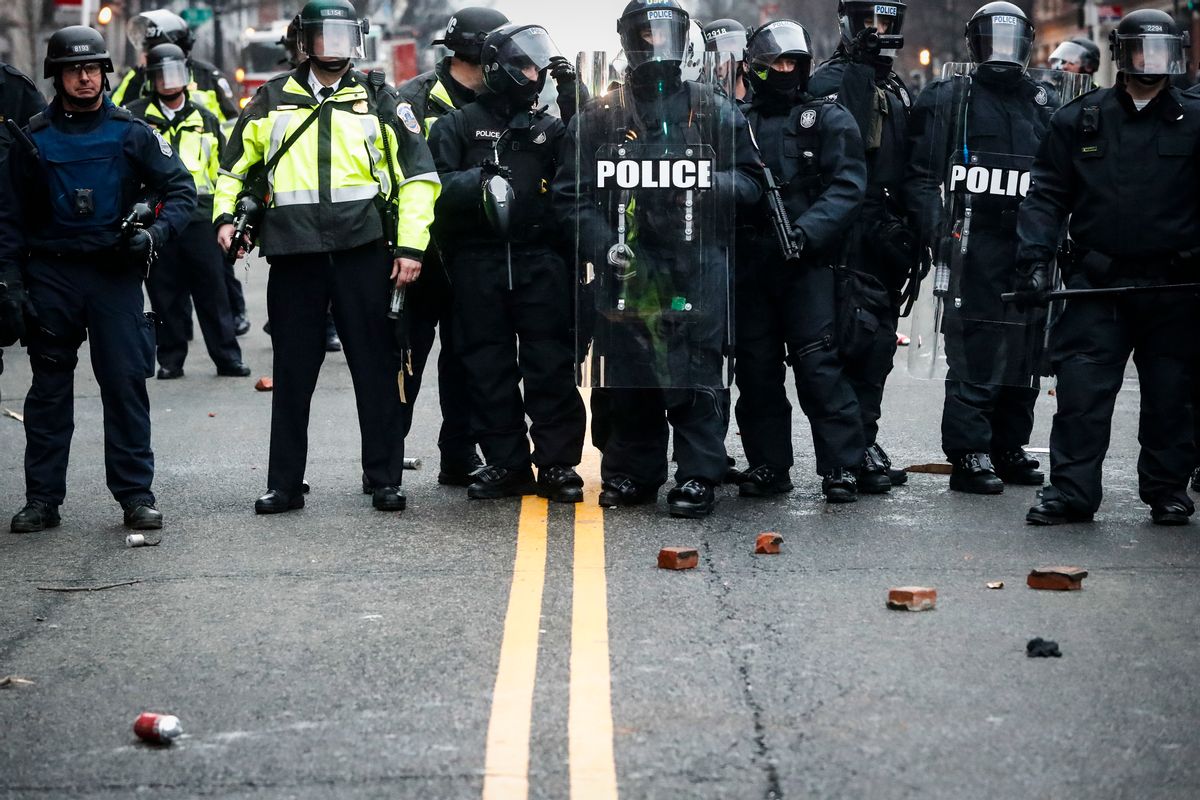 More than 200 people who were mass-arrested at the Washington, D.C. protests against the inauguration of Donald Trump have been hit with felony riot charges that are punishable by up to 10 years in prison. Those picked up in the sweep — including legal observers and journalists — had their phones, cameras and other personal belongings confiscated as evidence, a lawyer confirmed to AlterNet.

Demonstrators warn that the crackdown signals a new wave of repression against the protesters, whose mass mobilization was met with riot police violence, National Guard and Department of Homeland Security deployments, heavy surveillance and law enforcement snipers positioned on rooftops.

“These charges are absolutely horrifying. They are just trying to stop any resistance to the Trump administration,” Samantha Miller, an organizer with the Disrupt J20 Collective, told AlterNet. “Many of these demonstrators were showing rage and fear of what’s coming. It’s going to take a lot more than asking nicely to create change and stop the threats from the Trump administration.”

The vast majority of the roughly 230 people who were kettled and mass-arrested at the anti-capitalist bloc during Friday’s protests have been charged under the felony riot act, said Mark Goldstone, a National Lawyers Guild-affiliated attorney who has defended protesters in Washington, D.C. for more than 30 years. Washington, D.C. authorities put this number at 217. Goldstone confirmed to AlterNet that legal observers and journalists were among those detained in the sweep, explaining that, throughout his career in Washington, D.C., he has never seen mass charges of this kind.

Jeffrey Light, a Washington, D.C.-based lawyer who provided legal support to the Disrupt J20 Collective, agreed with this assessment. “I have been representing protesters for 13 years now, and I have never seen felony rioting charges in Washington, D.C. It is not one of the standard laws that they tend to use. This is unusual. It is rare to use that charge.”

“Across the board, all phones and cameras are being held as evidence, and they are also detaining gloves and cell phone chargers as evidence,” said Light. “They are giving people their wallets back generally, but that’s it. It is extremely troubling.”

According to a class-action lawsuit filed by Light on Friday, those picked up in the sweep and hit with felony riot charges already endured abuse at the hands of the police. “Our class action lawsuit charges that the police were rounding up everyone on the street without warning and putting them under arrest and using excessive force,” said Light. “There were a number of weapons we haven't seen Washington, D.C. police use in recent memory, flash bang grenades and tear gas. In addition to chemical irritants, they were assaulting people with batons. They were beating people.”

Those kettled by police were forced to wait for hours in the street and on school buses, many of them going untreated for injuries, say supporters. “They are trying to set a tone to chill further demos of this nature, and I don’t think it’s going to work,” Bob Hayes, a Washington, D.C. resident who is helping coordinate legal support, told AlterNet. “They are trying to put pressure on individuals to collaborate with the investigations.”

Light emphasized that, while the riot felony charges are new, the mass arrests are not. Acting D.C. Police Chief Peter Newsham was the assistant police chief who presided over another mass arrest more than a decade ago. In the fall of 2002, the Metropolitan police department mass arrested hundreds of people at a World Bank protest in Washington, D.C.’s Pershing Park and hogtied them for up to 24 hours while in detention before dropping all charges. In a 2015 settlement, the city was forced to pay $2.2 million to nearly 400 protesters.

Newsham, who ordered the mass arrests in 2002, oversaw the police crackdown against inauguration protesters.

Friday’s crackdown came as mass protests erupted across Washington, D.C. and the world, overshadowing the inauguration of Donald Trump, who many say rose to power on a tide of white nationalism and fascism. On Friday morning, social movements including the Movement for Black Lives and groups centering Muslim, Jewish and immigrant resistance converged at 14 different "security" checkpoints to shut down, slow and disrupt the presidential inauguration. “We stand in solidarity with everyone who challenges oppression in all of its forms, everywhere around the world, in favor of dignity, self-determination and defending our collective well-being,” reads a statement from the anti-capitalist, anti-fascist bloc circulated ahead of Friday's protests.

Those arrested in Washington, D.C. faced an outpouring of public support. Ryan Harvey, an activist and musician with Firebrand Records, told AlterNet that hundreds gathered outside the jail on Saturday to show their support for those being released. “Every time people came out, the crowd would cheer and chant,” with the term “anticapitalista” an oft-repeated refrain. “For many, it was like a surprise birthday party, and their faces lit up. Street medics were on-scene, and many supporters brought food, clothes, coffee, tea and water.”

Harvey emphasized that the support is important because it “defends the rights of these people to fight against fascism" and “combats the narrative that there is something more problematic about their protest than their is about the inauguration.”

Washington, D.C. residents say that the state violence on display this weekend extends far beyond the individuals hit with felony riot charges.

“A mother carrying her toddler was pepper sprayed in the face,” said Miller. “An elder from Standing Rock was sprayed in her face. A woman with crutches tried to intervene, and she was sprayed."

“We faced the Department of Homeland Security, the National Guard, riot police, surveillance, snipers on rooftops and Trump supporters,” Darakshan Raja, founder of the Muslim American Women’s Policy Forum and co-director of the Washington Peace Center, told AlterNet. “Just to walk around and see that, have them watch you as a target.”

“For weeks, the ‘alt right’ has been attacking us,” Raja continued. “They have sent death threats to the protesters of J20, attacked our organizations, reported us for false things to the city government, harassed all our partners, including the spaces we are housed. Their violence against us can’t be lost in this moment.”