The Women’s March makes its way to Mormon country: Utah protesters take up the resistance against Trump

Braving the elements, an estimated 10,000 women marched for gender equality in a state with a very long way to go 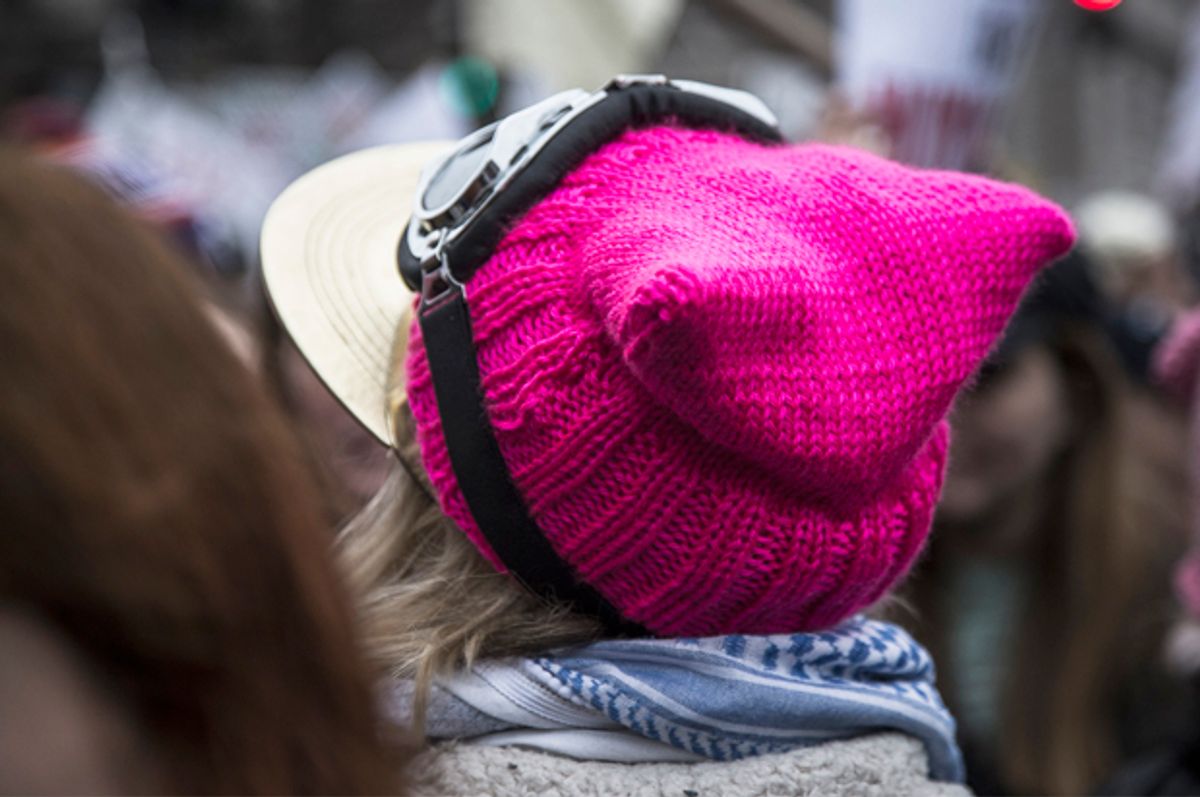 Ten thousand women marched in a snowstorm on Monday to the Utah capitol, braving hail and wind to protest against Donald Trump’s administration. One of those marchers was Maddie, an 8-year-old girl accompanied by her mother. She went to the event — on a school day, no less — because she is “scared” of what his presidency might mean for women and girls. “Trump feels like women aren’t as good as men are,” Maddie told me. It was her birthday.

The Salt Lake City protest, one of dozens of women’s marches across the country, was besieged by brutal conditions. The event had been scheduled two days after the national march in Washington D.C. in order to coincide with the first day of the Utah legislative session. In order to arrive at the capitol building, the marchers were forced to climb a hill as steep as it was slick, the snow causing several people to slip and fall. Many of the homemade signs reading “Women’s Rights Are Human Rights” and “Facts Matter” were destroyed by the hail and sleet, and barely legible by the time the impressive swell reached the rotunda.

But the crowd carried forward, packing all three floors of the Utah legislature to voice the concerns the marchers have about Trump as women, mothers, daughters, people of color, undocumented workers and LGBTQ people.

Gretchen Case, 47, was dressed as Lady Liberty. She told me that she went to march on behalf of all the teachers, homemakers and caregivers who weren’t able to attend. Her robe was emblazoned with the hopes and fears of friends in messages written in permanent marker.

Ian Summers, wrapped in a pride flag, said he wore the banner 10 years ago to protest the George W. Bush administration. Summers had hoped he would never have to unfurl it again at a rally. Lillian Cisneros, 36, brought her two teenage daughters to protest after a friend was harassed in a Wal-Mart by being told that she should start packing for when Trump deports her.

The Women’s March in Utah had an added significance as that state remains decades behind on gender equality. Several independent research studies have found the Beehive State is the worst in the nation for women to live in, based on disparities in income, health and educational achievement. A 2016 report from WalletHub placed Utah dead last in its workplace environment and education rankings. The state's overall score was 11 points lower than Idaho, the next worst state for women.

The income gap in Utah is particularly severe. Nationally, women are paid 78 cents for every dollar a man earns, but women living in Provo and Ogden take home 61.6 percent and 65.2 percent, respectively, of what their male colleagues earn. These cities rank as the two with the largest wage disparities by gender in the nation, according to a 2013 survey from 24/7 Wall Street.

Kate Kelly, a human rights attorney who lives in Salt Lake, said she believes that these stark inequalities are product of Utah’s pervasive Mormon culture.

“In the Mormon religion, women are not permitted to be leaders on any level,” said Kelly, who was excommunicated in 2014 for advocating for gender equality within the church. “Women are relegated to outdated roles of house and family.”

Sixty percent of state residents are members of the Church of Jesus Christ of Latter-day Saints, whose members also comprise a vast majority of the legislature. As Kelly told me in a phone interview, there are only 12 state lawmakers who are not affiliated with the Mormon church (out of 104 total members). There are even more Mormons in the Utah legislature than Republicans, a party that currently holds a supermajority in the General Assembly. Kelly said this helps set the tone for the state.

Chelsea Shields, who co-founded Utah Women Unite with Kelly following the 2016 election, agreed. “It’s no surprise that a state run by the highest percentage of Mormons also has the worst percentage of female leaders in business, female leaders in Congress, and female leaders in the Senate,” said Shields, a self-described Mormon feminist. “If you have a predominant culture that’s male-led and there’s some structural inequality, that seeps into your local politics — regardless of whether you want it to or not.”

Utah has been responsible for many of the country’s most extreme anti-choice laws. One of the bills proposed in recent years was the Perinatal Hospice Bill, which would have required abortion providers to tell women opting to terminate a pregnancy that the government would prefer them not to, even if the fetus wasn’t viable. The legislation failed to become law, but last year’s Fetal Anesthesia Bill did pass. That law mandates that anesthesia be delivered to a fetus before a pregnancy is terminated, which Kelly claimed is designed to “shame women for accessing reproductive health care.”

This year the legislature will debate the Abortion Reversal Bill. That legislation, if signed into law, would force reproductive health workers to tell female patients that abortions induced through medication are reversible. That claim is not scientifically accurate, but Kelly said it won’t stop the bill from “sailing through the legislature.”

In the past it has been extremely difficult to mobilize grassroots support against this kind of legislation — or even in favor of bills that would promote equality in the state. In 2012, Kelly and Shields organized a rally at the Utah capitol in favor of an Equal Rights Amendment that would have mandated equal rights and protections for women in Utah — something not currently guaranteed in the state. The issue, according to Shields, should have been a “no-brainer.” Only 500 people showed up to hear them speak.

The longtime advocates, though, believe the situation is changing. Prior to Monday’s protest, nearly 1,000 women traveled with Utah Women Unite to march in Washington; that’s twice the number that showed up to a Utah capitol protest five years ago. That event, while inspiring, reminded Noor Al-Hasan how far we have to go in this country — especially when it comes to fighting the intersectional prejudices faced by women of color. Hasan, a Muslim woman who grew up in California, wore her headscarf on the flight back to Salt Lake. The couple seated next to her asked to be moved.

“I didn’t expect something like that,” said Hasan, who was born in India. “After being here forever, I have a very good American accent. I grew up in the school system. I’m as American as can be.”

For a majority of those who gathered to march on Monday, Trump’s victory in the 2016 election represented a pivotal moment for activation. As was the case for many gathered at the women’s march, it was Julia Hovet’s first protest. A 15-year-old high school student, she works at one of the hotels in the downtown area of Salt Lake. Julia didn't know for sure if she would attend until, as she claimed, a customer harassed her at her job. A male guest complained that the female baristas who work in the hotel “know more about getting on their knees than making coffee.”

Julia said that this kind of behavior has become more common since the election. “I’ve never seen someone confident enough to say something like this before then,” she said. “No matter what I told him, it didn’t stop him.”

Organizers said the turnout Monday was unprecedented in the history of Utah politics, although the state government did not provide a crowd estimate. The presence of speakers and protesters in the atrium was so overwhelming that the lawmakers who gathered in the General Assembly reportedly couldn’t hear one another over all the ruckus.

A movement sparked by this energy could have a tremendous impact on the ability of women’s rights advocates to fight for equality in the future. But for many of the women who swarmed the state capitol, they marched because they felt they didn’t have any other choice.

Camilla Rodriguez stood on the steps of the capitol building huddled under an umbrella with her young son, Liam, strapped to her chest. The toddler, who struggled against the harsh cold as we spoke, is a U.S. citizen. His mother is not. Camilla, who is in her late 20s, is worried about what will happen to her family if Trump follows through on his plan to expel millions of Latino immigrants from the United States.

“I’m a permanent resident but not a citizen,” she explained. “I could still be deported. My son is a citizen. What does that mean? Would that separate us? I don’t really have an answer for that.”