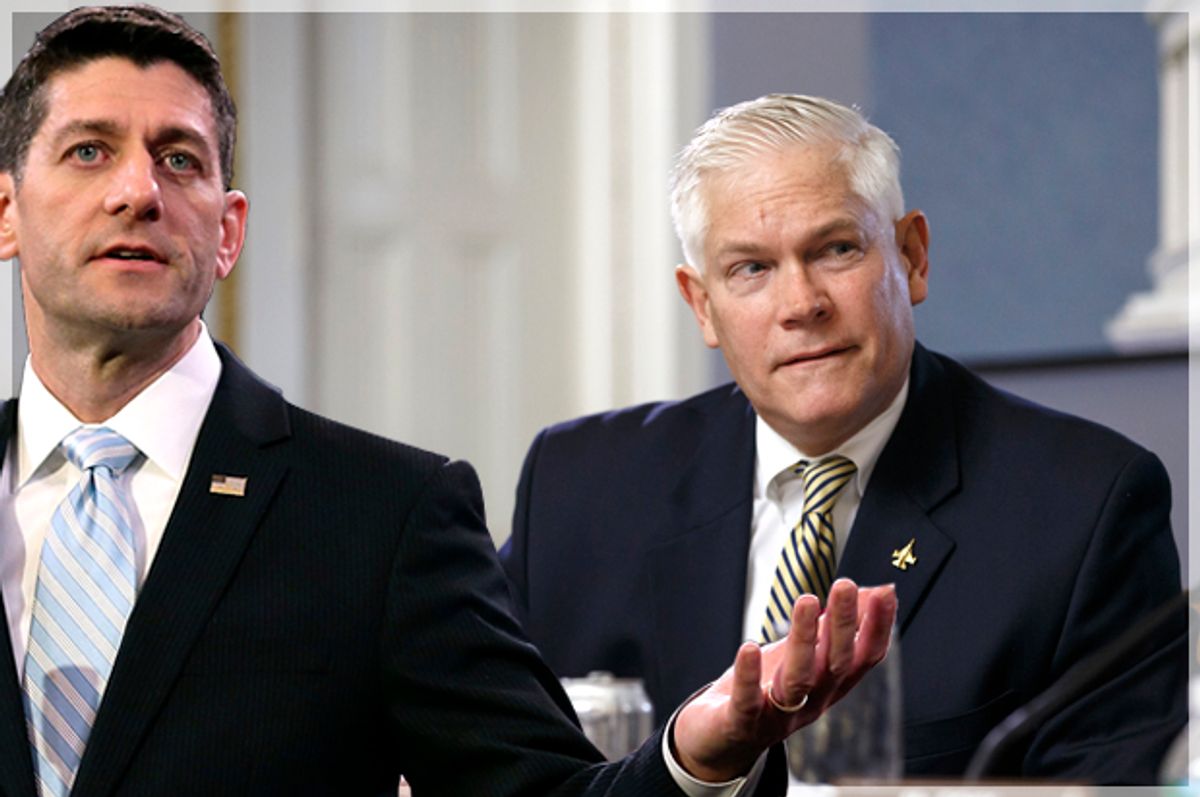 Last month Planned Parenthood released focus group research showing that while Donald Trump's supporters are often willing to express sexist attitudes, they aren't particularly keen on attacking reproductive health care access. Many of the participants were confident that Trump signified a new era for Republicans, when conservative politicians would drop the relentless attacks on reproductive rights.

"It seemed as if Trump’s lasciviousness, which Clinton hoped would disqualify Trump with women, actually worked in his favor," Michelle Goldberg of Slate wrote in December. "The focus group participants couldn’t imagine that Trump would enact a religious right agenda."

In reality, of course, the congressional GOP obsession with undermining abortion and contraception access shows no signs of abating under President Donald Trump. On the contrary, Republicans in Congress are well aware that Trump owes the religious right a few favors, because Christian conservatives marshaled their people to vote for a licentious worshiper of Mammon. That's why one of the very first action items on the congressional Republican agenda is passing bills to restrict abortion access, and cash in the massive debt that Trump owes them.

Trump has already signed an order depriving international family planning organizations of funding. As Scott Lemieux at Lawyers, Guns and Money noted, Trump probably didn't even know that this was even an issue before becoming president, but it hardly matters.
"But all signs are that Congress will let Trump loot the treasury and pack the cabinet with comically unqualified cronies," Lemieux wrote, "and Trump will pack the judiciary with neoconfederates, gut the regulatory state, and sign whatever legislation Ryan and McConnell put on [his] desk. One hand scratches the other’s back with an ivory backscratcher."

Something bigger arrives on Tuesday, when the House of Representatives is expected to vote on H.R. 7, titled the "No Taxpayer Funding for Abortion and Abortion Insurance Full Disclosure Act of 2017." (On Monday, the House Rules Committee, under the leadership of staunch abortion opponent Rep. Pete Sessions of Texas, approved the bill and sent it to be voted on later in the House.)

It's the same bill that congressional Republicans have queued up at the beginning of nearly every year since Barack Obama became president.

The difference this year, however, is that the GOP right now has a man in the White House who is likely to sign this effort to make abortion as expensive and difficult as possible for patients.

The bill has two parts. The first would codify the Hyde amendment, which prevents federal money from being used to cover abortion. It would make the ban permanent, instead of lawmakers' relying on an annual amendment that is passed with the annual appropriations bill. Right now, the federal ban on abortion spending could, in theory, be dropped from the appropriations bill in any given year, which would allow for abortion coverage for women on federal plans, such as Medicaid or military insurance. If this bill becomes law, restoring abortion coverage on federal insurance plans will become exponentially more difficult.

The second part, however, is a brand new attack on abortion access: A provision in the bill is meant to curtail or even end private health insurance coverage for abortion.

“It effectively bans providers that participate in the Affordable Care Act marketplace from offering abortion coverage," said Amy Friedrich-Karnik, a senior federal policy adviser for the Center for Reproductive Rights, in a phone interview. "The way that it does that is by saying women who get premium assistance credits are not allowed to use those credits to purchase any plan that has abortion coverage.”

In other words, this bill would bar anyone who receives subsidies to buy insurance through Obamacare from purchasing a plan that covers abortion. While that's numerically a narrow group of people, this bill could end up undercutting most or all private insurance coverage for abortion.

The proposed law, Friedrich-Karnik said, is "really blatant in its attempt to cut off all people from coverage for abortion care."

Trump ran for president largely on economic issues and immigration and rarely mentioned abortion. But his election has clearly done nothing to dissuade Republicans from making abortion restrictions their No. 1 priority, above minor matters like the economy or nonexistent concerns like government corruption. If anything, having Trump in the White House is prompting Republicans to become even more obsessed with this issue. H.R. 7 is one of the very first congressional agenda items of the Trump presidency.

This is part of a pattern, said Friedrich-Karnik, that includes Trump's "Cabinet picks, his repeated promise to nominate someone to the Supreme Court who opposes Roe v. Wade and his willingness to dismantle the ACA. All of that definitely shows that he is committed to dismantling women’s access to health care, including abortion care. We can do nothing but take him at his word on that, until he proves otherwise.”

There's no reason to think that Trump will do anything but sign this bill, if it reaches his desk. If there were Trump-branded abortion clinics that benefited him financially, that might be a different story. As things stand in Washington now, there's no reason to believe the new president will stand in the way of right-wing ideologues who want to cut off women from receiving reproductive health care.