"Split" has very problematic views on psychological disorders — but to explain why, I need to spoil the film's brilliant twist

M. Night Shyamalan has a doozy of a twist at the end of "Split," but does it make mental disorders a punchline? 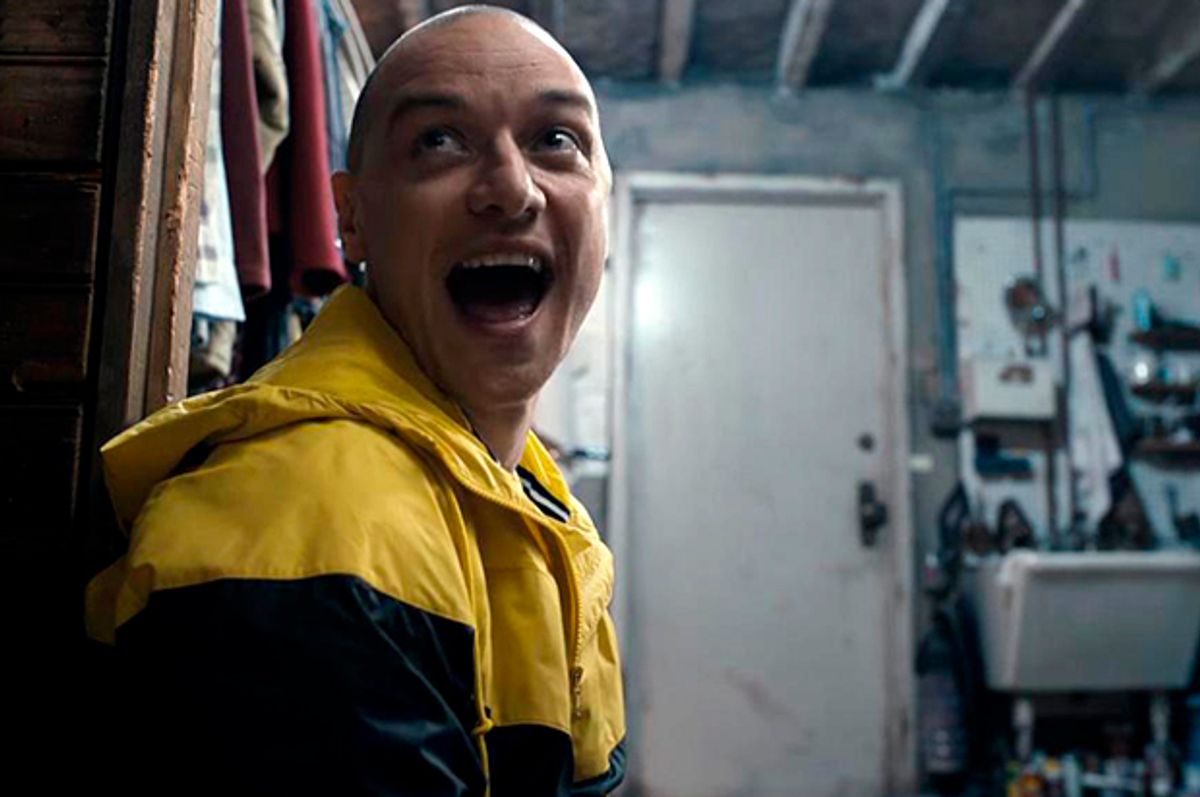 As the title of this article indicates, everything that follows is a spoiler for "Split."

It looks like "Split" is going to be M. Night Shyamalan's big comeback and deservedly so. The surprise sequel to the 2000 cult classic "Unbreakable" has the cleverest twist from Shyamalan's entire oeuvre — yes, even better than "The Sixth Sense." That's not only because the plot of "Split" is a perfect fit for the universe of "Unbreakable" but because Shyamalan was able to release a secret sequel in the first place without the general public's discovery until it hit theaters. If you're a fan of "Unbreakable" like me, then it is definitely worth seeing.

At the same time, understanding "Split" in the context of "Unbreakable" helps illustrate exactly what is so problematic about the movie. Whereas "Unbreakable" used comic books as the source material for its supernatural conceits and monsters, "Split" grounds its mythology in the science of psychology — except that mental illnesses, unlike comic books, aren't fictional. There are real people out there who have to live with the countless burdens, seen and unseen, of feeling like a psychological "other," and "Split" further perpetuates harmful stereotypes instead of combating them.

The premise alone is troubling enough: James McAvoy plays Kevin Wendell Crumb, a zookeeper with dissociative identity disorder who kidnaps three teenage girls and later his therapist in order to sacrifice them to one of his multiple personalities, known simply as "The Beast." Right there you have a horror movie that has been sold to the public based on a pernicious prejudice — namely, that of the evil, violent, and otherworldly "crazy person."

Those who have this disorder are not any more likely than the rest of us to be violent, of course, but viewers will be left with the opposite impression as they watch McAvoy show off his prodigious skills by portraying one creepy "crazy" character after another, after another. (And yes, as almost every critic has agreed, he is highly skillful at doing this.) It doesn't help that another one of Kevin's personalities is a pedophile who forces the girls to dance in various stages of undress, which plays up the prejudice that mentally ill people are more likely than others to be sexual predators.

Indeed, the use of sexual abuse as a plot device speaks to the deeper problematic element in "Split." In "Unbreakable," Samuel L. Jackson's character, Elijah Price, argues that comic book superheroes are simply based on real-life people who happen to have remarkable abilities, such as Bruce Willis' character, David Dunn, being the sole survivor of a train crash that killed every other passenger. In order to fit the "Split" story into the universe of "Unbreakable" Shyamalan presents people who are "broken" from severe psychological trauma as being able to physically enter the next stage of human evolution.

This is why during the film's climax Kevin is transformed into a murderous, cannibalistic beast, complete with a mane of wild hair, super strength, the ability to climb walls and unbreakable skin. Not only does he have dissociative identity disorder but his early childhood traumas have also left him with post-traumatic stress disorder and obsessive-compulsive disorder, which, according to the film's logic, add to his "brokenness" and thus his likelihood of entering the next stage of evolution.

This isn't merely a quirk in a convoluted narrative; it's the movie's main contribution to the mythology first established in "Unbreakable." And like so many of Shyamalan's films, it is clear in retrospect that he had been setting this up to happen throughout the film's running time. One of the teenage girls, Casey Cooke (played by Anya Taylor-Joy), is gradually revealed in flashbacks throughout the movie as a sexual assault victim and a cutter so that The Beast ends up sparing her in the end after realizing she is also "broken" and "pure."

Just as the twist in "Unbreakable" hinges on the notion that heroes and villains in comic books usually exist along different points of a spectrum, so, too, does the surprise plot twist in "Split" use psychological atypicality to posit that the good guys and bad guys are really not so different from one another.

Where Shyamalan stumbles is the ham-handed use of mental abnormality as a stand-in for the superpowers of heroes and villains. Juxtaposing real hardships with fictional tropes lends itself to gross oversimplifications. This isn't the first time that Shyamalan has exploited mental illness in this way, as major plot points in films from "The Sixth Sense" and "The Village" to "The Visit" all depend on acts of violence being perpetrated by individuals with psychological disorders. Shyamalan's films reduce the meaning of having any kind of mental health condition to merely having potential for disruptiveness and violence. People with emotional issues are "others" while those who are unaffected are considered "normal" and must figure out a way to deal with them.

The shame of it is that there is a kernel of a progressive idea in "Split." As an autistic person myself, I have repeatedly written that spectrum disorders should be viewed as simply a different way of mental functioning rather than an inherently "unhealthy" or "inferior" one. I would argue that the same thing is true about many other mental health conditions. Although our culture tends to view non-neurotypical behavior as inherently "bad," we need to be culturally retrained to recognize that the only "bad" behavior is that which causes people to harm one another.

If someone is psychologically atypical but can socially function without posing a risk to himself or herself or anyone else, then the burden should fall on members of society to shed any prejudices that might cause them to stigmatize or otherwise wrong that individual. "Split" takes a step in this direction by positing that  "mental sickness" might not always be an actual illness — but then takes two steps back by exploiting moviegoers' fears that people with unusual mental conditions can be unpredictably violent.

I've been a huge fan of "Unbreakable" from the moment Samuel L. Jackson uttered the immortal line, "They called me Mr. Glass." Shyamalan sets up "Split" brilliantly as both a freestanding film and a sequel to "Unbreakable." If the overwhelmingly positive audience response in my theater is any indication, there will likely be a third film in the series and I look forward to seeing how Shyamalan can expand on the themes of the cinematic universe he has created.

I just hope he won't forget about the problems of the real universe as he sets about completing his own.