A crappy health care "compromise": GOP's new Obamacare "replacement" bill is sure to be wildly unpopular 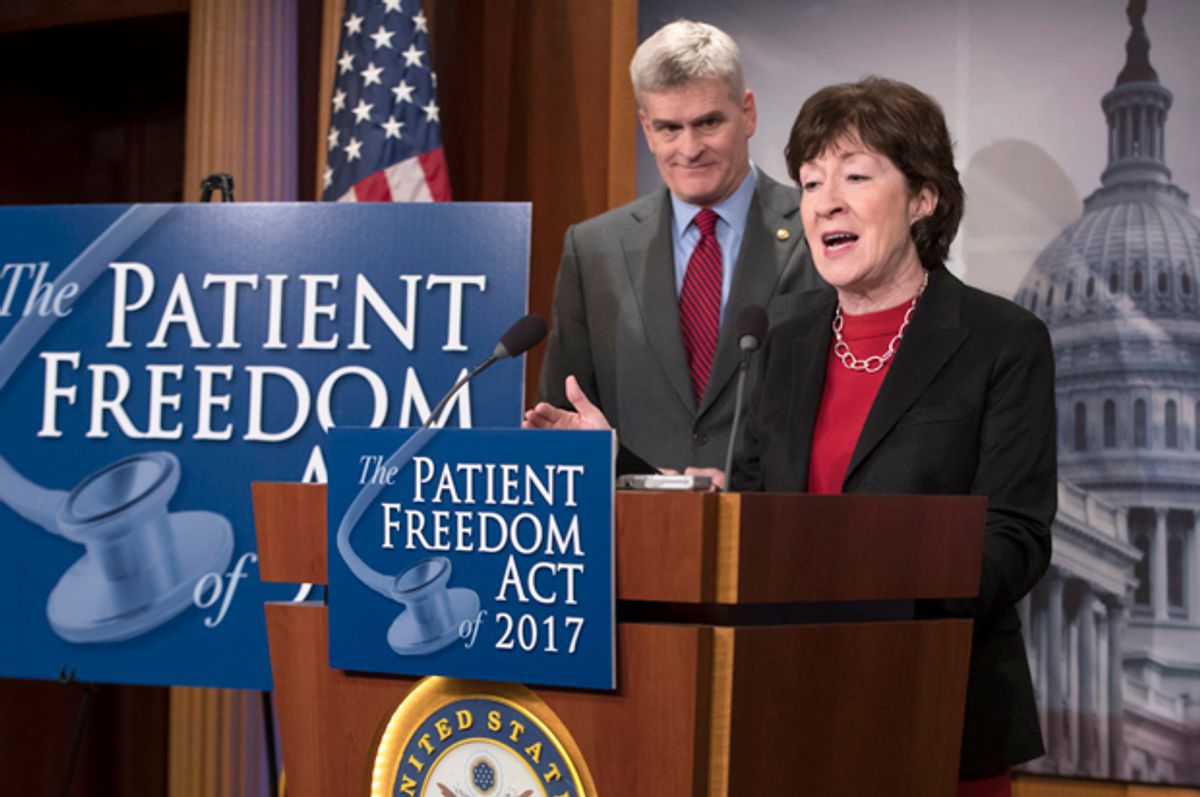 The legislation is being marketed as a “compromise” bill, but it’s nothing of the sort, and it would result in lots of people losing their health coverage.

The legislation sponsored by Bill Cassidy, R-LA, and Susan Collins, R-Maine (or the Cassidy-Collins bill) would eliminate critical portions of the Affordable Care Act: the individual mandate, the employer mandate and its minimum coverage requirements. With those provisions tossed aside, it would allow states to pursue one of three options.

Under the bill, a state could choose to restore the Affordable Care Act within its borders, including all the mandates and most of the federal subsidies (the legislation imposes a 5 percent cut). Or a state could opt out of the ACA and rid itself of the mandates, subsidies and Medicaid expansion (though some ACA protections would remain, including the ban on discrimination based on pre-existing conditions). Or a state could select a middle route whereby the mandates are eliminated but federal funds for subsidies and Medicaid expansion continue to flow; the money would be tied to age rather than income and directed into health savings accounts for individuals.

So I guess the idea here is that everyone in Washington will supposedly be happy: The liberal states can still have Obamacare, the hard-line conservative states can have a free-market health care Thunderdome, and the ideologically mixed states could do an exciting tightrope walk between those two options.

This will not be popular, and a lot of people in Washington will hate it for many different reasons. Let’s start with the Republican who spent the last seven years promising to do everything in their power to cleanse the Earth of every last vestige of Obamacare. Those Republicans will hate this because it does not accomplish that goal, and not one of them is going to want to support this bill just to have some hard-line crank challenge them in a primary by arguing that they voted to save Obamacare lite. There’s also a significant chunk of the GOP, both among its base and within the Beltway, that is balking at the very idea of any government mandate or subsidy for health care.

And when it comes to Democrats, they’re not going to tolerate any sort of dismantling of the health care law they spent literally all their political capital to pass. There’s also the question of coverage. Universal health coverage is an explicit goal of the Democratic Party, and this bill is a huge step backward. Senate Minority Leader Chuck Schumer, D-N.Y., has already issued a blistering statement on the proposal, saying “it is nearly impossible to keep the benefits of the Affordable Care Act without keeping the whole thing.”

I also can’t imagine that health insurers are going to be huge fans of this proposal either. In states that chose to opt out partially or entirely from the ACA, insurers would face a situation whereby they’re forced to issue policies to sick people, but there are no mandates to impel healthy people to purchase insurance. (Of course, in states that opted out completely, healthy consumers would receive no subsidies either.) A situation like that will be financially unsupportable for insurers unless they jack up premiums, which would force still more people out of the insurance market. That’s the “death spiral” Republicans keep insisting is happening right now with the Obamacare marketplaces.

Regarding the “death spiral” that is supposedly worsening and in need of urgent attention, the Congressional Budget Office released its 10-year economic outlook on Tuesday. According to its projections, which assume that policy conditions remain static, “10 million people per month, on average, will have insurance purchased through the [Affordable Care Act] marketplaces in 2017" and "that number is projected to grow to 13 million by 2027.” Overall, the budget office found that 18 million people will have nongroup coverage this year, and 20 million will have it by 2027. If there were any sort of “death spiral” in the offing, it would have probably been reflected in the budget office's analysis, but the agency doesn’t seem to believe it will happen.

Anyway, a bill like this doesn’t accomplish much beyond revealing the still irreconcilable tensions that exist within the GOP over crafting any sort of viable legislative “replacement” for Obamacare. Republicans have repeatedly promised to conjure up a bill that will leave everyone happy, cover more people than the ACA, cost less money and have fewer regulations. The Cassidy-Collins bill is an attempt to achieve this, but Republican infighting, Democratic resistance and the realities of the insurance market make clear that this promise is a pipe dream.