It's Breitbart's White House now: House organ of the alt-right builds a power base in the West Wing 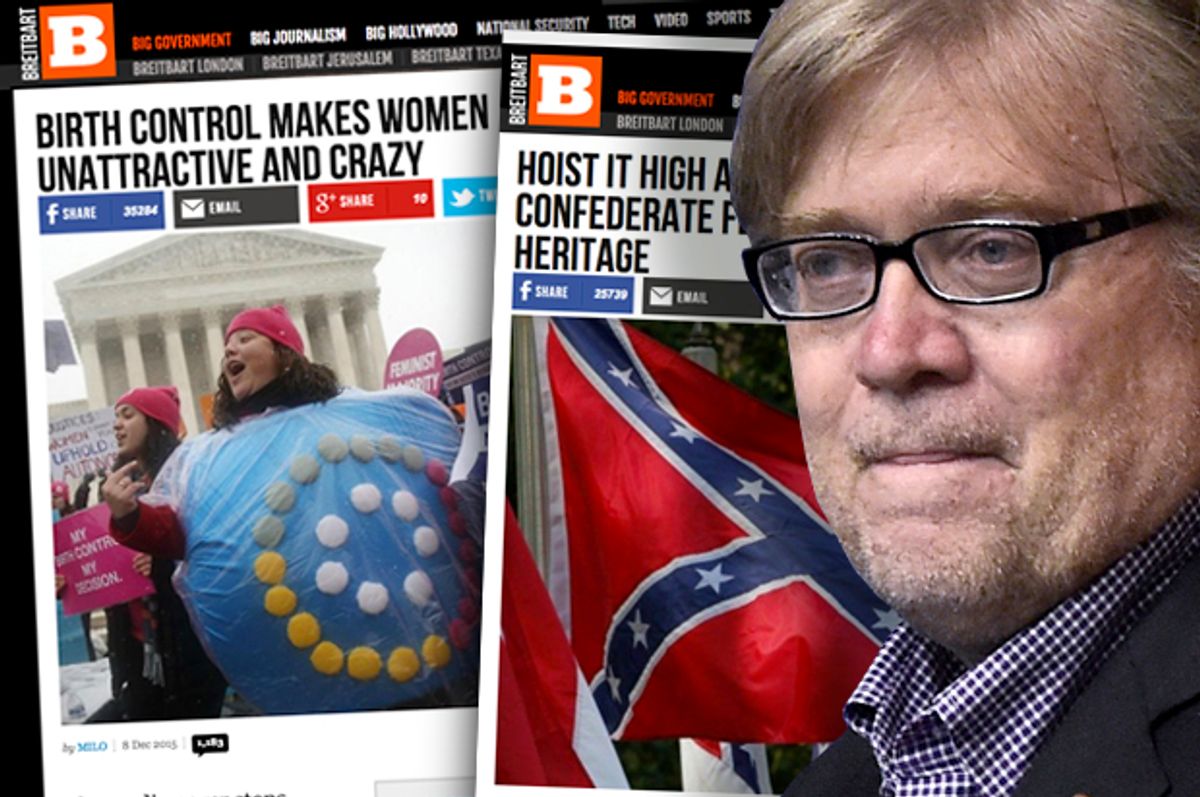 There are already almost too many tragedies to count that have already been set in motion by the nascent Donald Trump administration. But for anyone concerned about the country’s accelerated dash towards right-wing nationalism, the White House staffing up with former employees of far-right propaganda organ Breitbart News has to rank high on the list.

On Monday the White House announced that Breitbart reporter Julia Hahn would join the administration as an aide to her former boss, Steve Bannon, who took a leave from Breitbart last summer to oversee Trump’s campaign and now works in the West Wing as the new president’s chief strategist. Then on Tuesday came the announcement that Sebastian Gorka, who has served as Breitbart’s national security editor since 2014, is also going to work in the White House, most likely in some role on the National Security Council.

Media Matters has a rundown on some of Gorka’s greatest hits. The Fox News contributor has what sane people have long considered fringe views in the mode of noted Islamophobe Frank Gaffney. Among other things, Gorka has pushed the idea that former president Barack Obama was “sympathetic to Islamic terrorists” and blamed incidents like last year’s Orlando nightclub massacre on the “political correctness” that Gorka thinks blinded the last administration to threats from radical Muslims.

Hahn, meanwhile, has spent much of her time at Breitbart chasing House Speaker Paul Ryan and any other Republican who has not shown sufficient fealty to the ravings published by the site’s stable of paranoid and terrified right-wing nationalists, in service to policies like cracking down on immigration and banning Muslims from entering the country. In doing so, she has used the usual buzzwords to viciously denigrate more mainstream Republicans (Eric Cantor is a “discredited globalist") and once blatantly misstated math from a study to attack Ryan’s position on immigrant quotas. When challenged on her calculations by New York’s Ed Kilgore, she accused him of being an “apologist for female genital mutilation.”

All together now: She sounds nice.

With Bannon in the West Wing, it was inevitable that the administration would bring in a few of the propagators of the racist, isolationist, nativist swill that over the last few years has made Breitbart the go-to “news” site for the sort of white people who berate Mexican restaurants for printing their menus in Spanish. But even recognizing the likelihood that Bannon would poach some of his former employees was not enough preparation for the head-spinning ugliness we will likely hear on a daily basis from a fully Breitbart-ized White House.

And it's not just Breitbart that is being brought into the White House fold. Similar fringe sites that push conspiracy theories are also gaining a place in the White House press room and being accorded the attention of new press secretary Sean Spicer. At Tuesday’s briefing, the first question went to Laura Ingraham’s crackpot site Lifezette, which had just finished scrubbing a video implying that Bill and Hillary Clinton might have had several close associates murdered. Last week it was announced that the Gateway Pundit, another right-wing funhouse full of race-baiting hysteria and conspiracy theories, will have a correspondent among the White House press corps for the first time.

Thus the shape of this administration continues to emerge. On the policy side, there are the hard-right, long-held conservative priorities, like gutting what's left of the social safety net, that will radically reshape society. On the propaganda side, expect paeans to Breitbart-approved muscular nationalism that's needed to convince the public that it is our patriotic duty to enact these right-wing policies and roll back the Great Society and the post-World War II international order, the New Deal. All of this emanating from a White House friendlier to white supremacy than at any time since Woodrow Wilson was screening D.W. Griffith's “The Birth of a Nation” there.

The site that Bannon giddily called “the platform of the alt-right,” onto which he dumped the vilest race-baiting, Islamophobic content in order to gin up a reader base whose energy he could then harness to help push Trump into the White House, now has the most powerful platform imaginable. If the stories pursued by the likes of Julia Hahn are any indication, that White House will be ruthless in targeting and bullying lawmakers into complying with Trump’s agenda — to say nothing about the rest of the nation.

It remains to be seen what unbridled nationalism backed by powerful and shameless propagandists with control of the government and access to almost instantaneous messaging to millions of people means for the future of our democracy — or whether our already precarious system can handle this stress without snapping.