My broken bones are teaching me to fight Trump

In politics and in health, you have to play the hand you're dealt 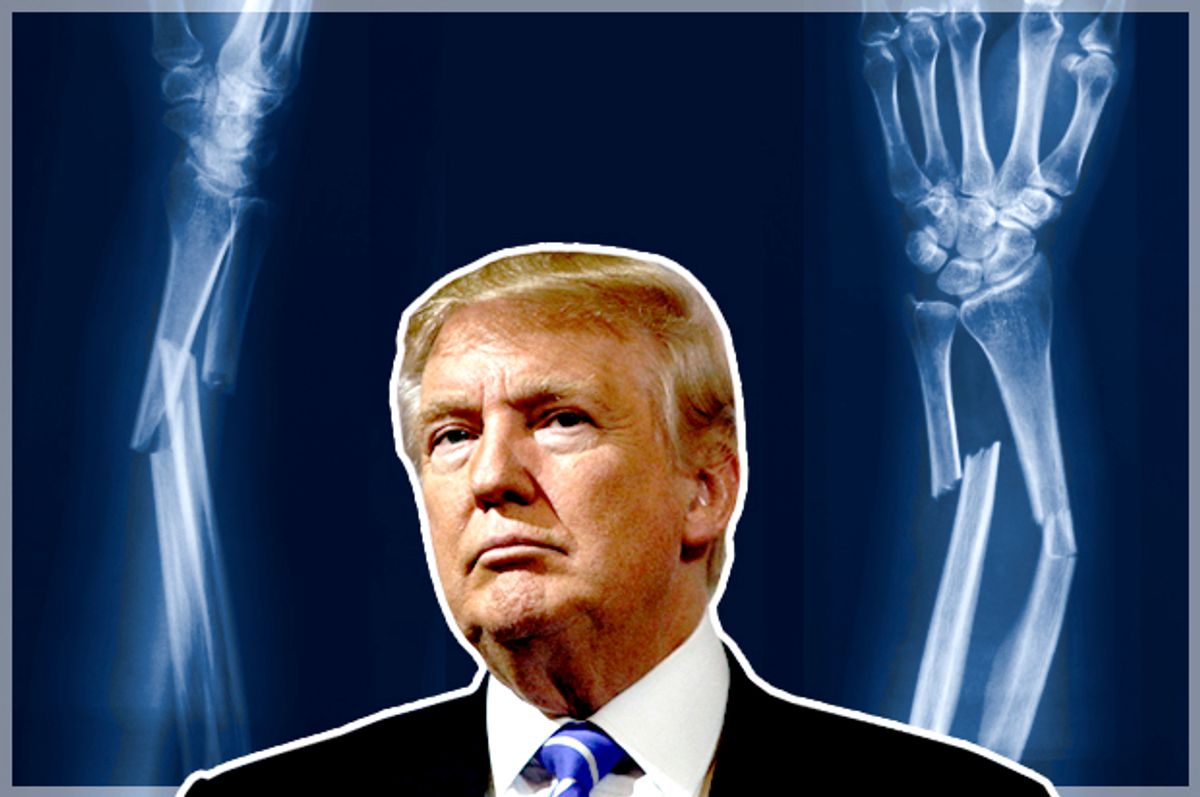 This definitely has turned out to be a tough month to pick up a whole new set of life skills. But then again, learning experiences are rarely optional. On Jan. 2, I posted on Twitter that my mantra for 2017 would be, in the words of "Legally Blonde'" heroine Elle Woods, "I'm not afraid of a challenge."

A week later, the universe replied by issuing me one. While walking down the sidewalk, a skill I confidently believed I had mastered by the age of 2, I skidded on a patch of ice and shattered my wrist and cracked three teeth. Since then I have often found myself feeling about my body the way that I do about America right now: pretty goddamn miserable. Also pretty goddamn determined to master this painful new normal.

Believe me, I know that there is no competition for who is having the worst January and that if there were, I would not even make the team. But it's been a tire fire nonetheless. Two days after my accident, my younger daughter had a similar spill and fractured her tailbone. Two days after that, my older daughter developed a sudden and harrowing puke virus. I spent the week slinging my coat over my shoulders and dashing off to doctors' offices — insanely grateful for our family's insurance at precisely the same moment the Republican Congress was busy dismantling health care reform.

This past Monday I had surgery on my arm, which is currently healing in a foam-padded cone of shame. On the upside, I got to spend two days of this new administration in a hospital under some pretty heavy sedation. Next week I will have more dental work to fix my teeth and, I hope, correct that fun new lisp that has added an extra layer of challenge to all the voice dictation I've had to do. (Sometimes you just have to hope that the person you're texting knows what what you mean when you say you can use your "path port" as a photo ID.)

Meanwhile, my orthopedic surgeon predicts that eventually — several months from now — I will regain about 80 percent of my hand's former mobility. This means I may never again be able to do a plank pose or flip the bird with my former panache, but this is nonetheless a hopeful outcome. I like to believe that after difficult setbacks, progress is always possible. Healing is always possible. It just takes a hell of a lot of work. That was a metaphor.

In the blur of this grim January, it's been difficult to not feel constantly defeated. There's been a lot of nonspecific crying. And it took a while to understand that at least some part of my misery was attributable to the fact that I no longer have access to my usual therapeutic resources. The things that keep me steady and grounded and feeling somewhat normal in chaos are harder to reach right now.

When I am stressed, I always return again and again to the kitchen, to the consoling act of preparing food and nourishing my loved ones. For now, I can't even chop an onion or bite into an apple. My morning routine has usually involved running, and before my fall I was training for two spring races. Running and yoga are my meditative practices that I do more for my mind than my body. I've had to dial back on both drastically and figure out how to move in ways that don't exacerbate injury. I have felt that absence acutely. Even if every news headline this month had not been truly crazy making, this month would have been, for me, truly crazy making.

So I am now trying to apply a new attitude to both my mental health and civic responsibilities. Do I dearly miss just this past December, when Barack Obama was my president and I had two fully functioning hands? You bet. But Donald Trump is in the White House and I can't lift my purse. Better cue up the "Rocky" music and get in training.

My democracy, like my right hand, has been for my whole life something I exercised regularly but also assumed I could always rely upon. My left hand, it turns out, has been more like my spleen or the popular vote shockingly useless. And now the balance has shifted.

So I am practicing cursive with my left hand from a book aimed at first-graders. I am speed dialing my senators with that same hand. On Saturday, I took my daughters to the Women's March in New York City, wearing a hastily put together Rosie the Riveter ensemble and flexing a cast-swaddled bicep tenuously gripping a "We can do it!" sign in shaky scrawl. It hadn't been my original plan for my getup but, hey, we made it work.

When the things that you relied on for your mental health and happiness and sense of security are suddenly no longer available, you've got to figure out pretty quickly what your new thing is going to be. I've been practicing vocalizing with a voice tutor app, not because I can sing but because it feels very good and necessary to practice raising my voice. I've been learning some phrases in Latin, because the Catholic girl in me has always wanted to learn more Latin. Phrases like "Dum spiro spero" (While I breathe I hope) and "Per aspera ad astra" (Through hardship to the stars).

Like my lifelong ways of eating soup and brushing my teeth, my former systems of working within my democracy — even through the roughest, most divisive periods that I have seen in my lifetime — have similarly been upended in an eye blink. So I'm learning to flex different muscles. I'm learning to work within a new reality that is very painful and hobbled and hard. It sucks and I hate it. But OK, I'll figure it out. And amid all that crap and work and frustration and agony, I have to believe that with new skills comes new strength.

I think a lot lately about journalist Miles O'Brien, who three years ago had to have his left arm amputated after a seemingly minor accident. I think about how he described waking up "to a new reality" and his wry wisdom that "Life is all about playing the hand that is dealt you." For me right now, that unfortunate hand is very literal.

For my country and for the ideals and values that many of us hold so precious, O'Brien's message feels a lot scarier and more open-ended. But as the Women's March and the steady stream of recent defiant shows of true patriotism remind me in my darkest moments, a hard fight is not a lost fight. And I absolutely believe with all my heart that we are all going to get really good at hitting back, with everything we've still got left — and that together, we will always be unbreakable.