Trump's day of shock and awe: Amid a blizzard of executive orders, the loose talk on torture is deeply chilling

Trump proposes a blinding cascade of policy changes, but his casual "torture works" may be the worst news of all 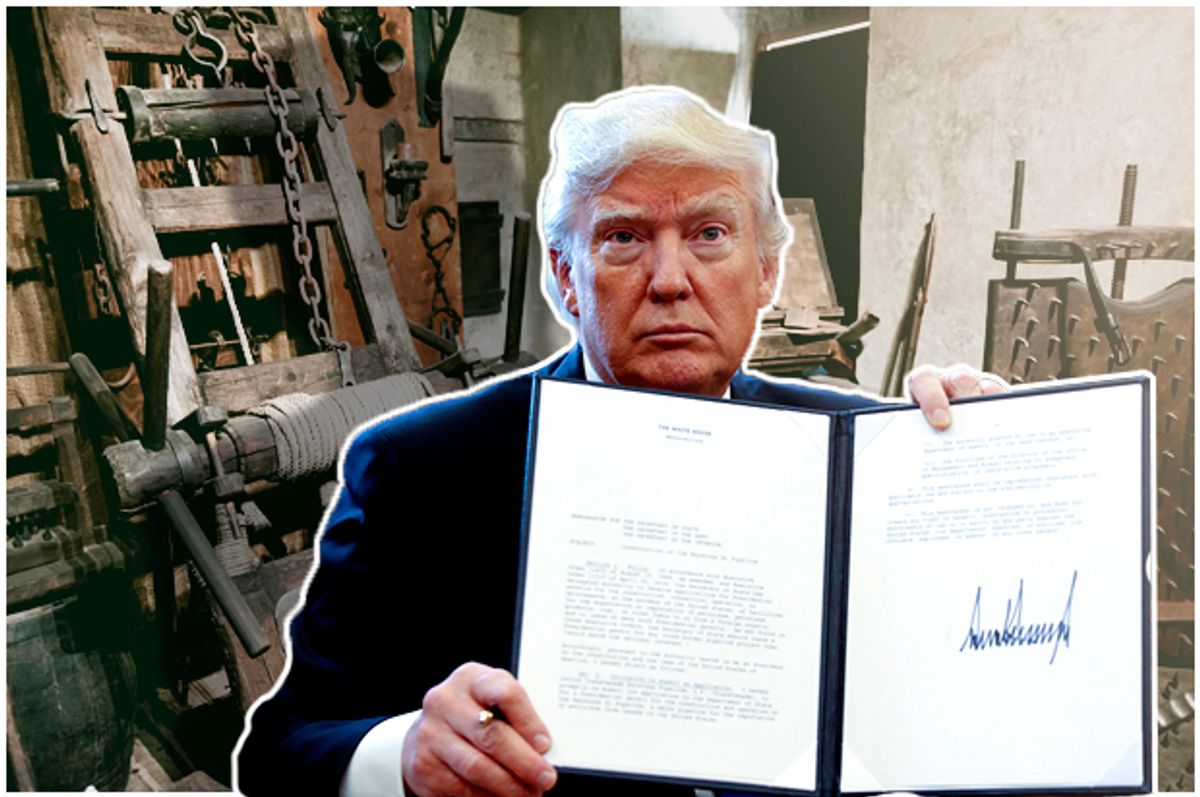 President Trump gave a speech to the Department of Homeland Security on Wednesday in which he declared that it was "a law enforcement agency" and promised "to restore the rule of law in the United States." He ran as a law and order candidate so none of this was terribly surprising. He spent most of his time talking about the tragedies of American families who have had a member killed by someone who was in the country illegally, just as he did at the Republican convention in Cleveland. (One can only wish he would show the same compassion toward the much larger number of American families whose children are killed by gun-toting fellow citizens, but that's a different story.)

Earlier in the day Trump had signed an executive order directing state and local government to act as immigration officers and "ensure the faithful execution of the immigration laws of the United States against all removable aliens." (Emphasis added.) This presumably means turning over to federal authorities undocumented people who have committed no crime, a policy most local and state police oppose, since it terrorizes millions of innocent people and threatens to drive them underground where they no longer cooperate with authorities in any way. Trump also promised a number of other homeland security reinforcements, including the hiring of 5,000 new border patrol officers. And needless to say, work is going to start on his Big Beautiful Wall right away.

Word is that Trump's plans for "extreme vetting" and temporary bans on refugees and visitors from certain countries (all of them nations that are predominantly Muslim in the Middle East and Africa) are scheduled to follow by the end of the week. His authoritarian domestic agenda is well on its way, launched in a blinding blizzard of executive orders. His followers must be pleased.

Trump is also making news on his national security agenda. We heard late on Wednesday that he's preparing executive orders to drastically reduce the U.S. role at the United Nations and other international groups. (This should not be seen as evidence of his "isolationism." It's evidence of his unilateral imperialism.) Most unnerving of all, a draft of a proposed executive order to explore a new regime of torture and reopen the secret CIA prisons known as "black sites" from the George W. Bush era made the rounds, sending a shock wave through the political world.

When he was asked about this at the Wednesday press briefing, press secretary Sean Spicer robotically denied that the draft order "came from the White House" and it turned out that it originated with the 2012 Mitt Romney campaign. (It figures that Trump staffers plagiarized the language from someone else; they routinely lift everything from cake designs to convention speeches.) BuzzFeed reported that this had originally been the most "comprehensive option" in a larger document, supposedly the only option that explicitly referred to CIA detention and torture programs. So we don't know for sure whether the new administration will actually issue this order; at this point, it would be surprising if it didn't.

After all, during the presidential campaign Trump promised over and over again to bring back torture. Commentators on TV yesterday insisted that he told The New York Times he had changed his mind after speaking with incoming defense secretary James Mattis, who told Trump he didn't believe torture worked. But anyone who believed that must not have read the actual interview. He actually said, "I was surprised because [Mattis] is known as, like, being the toughest guy and when he said that, I'm not saying I changed my mind." He hasn't.

On Wednesday Trump also had a remarkable interview with David Muir of ABC News, in which he said that within the previous 24 hours top intelligence officials had reassured him that "torture works." He also reiterated what he had said several times on the campaign trail, that he believes the U.S. must be as brutal as the terrorists:

We’re not playing on an even field. When they’re chopping off the heads of our people, and other people. When they’re chopping off the heads of people because they happen to be a Christian in the Middle East — when ISIS is doing things that nobody has ever heard of since medieval times, would I feel strongly about waterboarding? As far as I’m concerned, we have to fight fire with fire.

He did say that he would do what Mattis and CIA director Mike Pompeo wanted, and promised to keep everything within the law. How that squares with his certainty that torture works is hard to say.

It's stunning how Trump casually uses the word "torture," especially now that he is the president. Since it is a war crime and viewed as illegal in the U.S. and around the world, officials who approve of torture have usually used the euphemism "enhanced interrogation." That is primarily for legal reasons but also because they generally recognize that most people consider torture an immoral abomination, and using the word comes with a political cost. Barack Obama, like George W. Bush, originally insisted that "the U.S. doesn't torture" but later admitted, "We tortured some folks." He still refused to prosecute any of the perpetrators, however, preferring not to "look in the rearview mirror." Well, we're about to have a head-on collision with history.

Even some Republicans are balking at Trump's torture talk, although it's likely a small club:

When it comes to the notorious "black sites," these are basically prisons in foreign countries where the U.S. secretly detained and tortured suspected terrorists so that America didn't have to deal with all the messy due process of incarcerating them at Guantánamo Bay. Think about that. If Trump plans to do any of this lawfully he's going to have to find a way to eliminate the McCain-Feinstein amendment in the 2016 National Defense Authorization Act that bans torture and secret sites that don't allow Red Cross access. That amendment passed the Senate by a vote of 78 to 21. Our laws also require that all forms of interrogation comport with the Army Field Manual as well as international treaties and conventions — which poses more obstacles to any potential torture policy.

Of course all Trump would probably need to reverse those laws would be a major terrorist attack against the U.S., and the way he's talking we're likely to see a major one before too long. This loose talk by the president of the United States — endorsing wanton brutality, saying he believes in "fighting fire with fire," bragging about invading countries and seizing resources like he's Genghis Kahn — is being heard by people all over the world, some of whom are undoubtedly thrilled to have such a brilliant recruiting tool for their violent cause. Every time Trump opens his mouth and issues more crude trash talk, he makes all of us less safe.